Thailand continued to position itself as a destination for travellers to visit by staying in the top 10 in the latest report by the UN travel agency.

With 35.4 million visitors in 2017, the kingdom dropped one spot from ninth in 2016 to 10th last year, the World Tourism Organisation (UNWTO) said in its recently released tourism highlights.

France remained the most popular destination, with 86.9 million travellers, while Spain overtook the United States as the second most-visited destination when it recorded 81.8 million international arrivals, compared with 75.9 million in the US.

Thailand remained fourth in tourism earnings, with US$57.5 billion, while Macao and Japan cracked the top 10 for the first time.

The top three countries enjoying the most spending from visitors were unchanged, led by the US ($210 billion), Spain ($68 billion) and France ($60.7 billion). 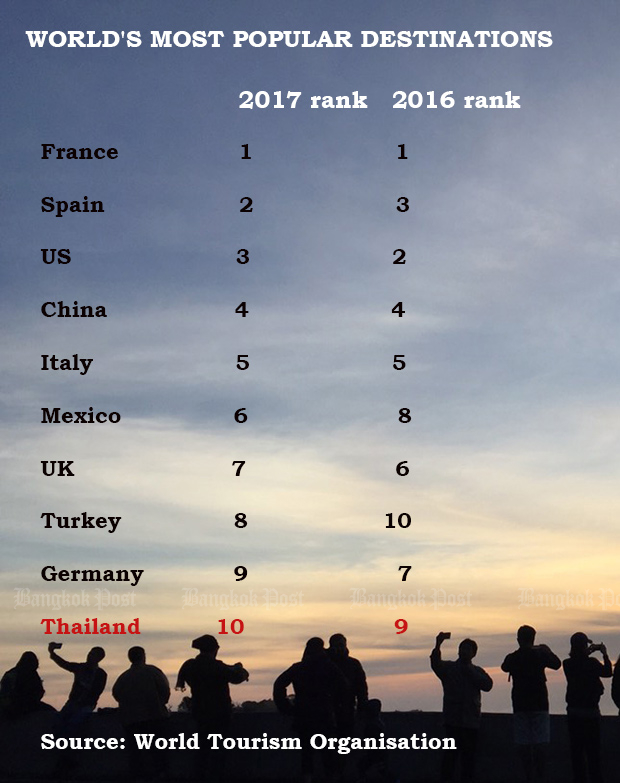 The Tourism and Sports Ministry projected 38 million visitors this year, about 11 million from China. The country reached half-way of the target when more than 19 million arrived in the first six months.

The ministry expected a drop of Chinese tourists last month in the wake of the Phoenix boat tragedy in Phuket in July that killed 47 travellers from China.

China dominated global tourism last year with plenty of money to splash out. They spent almost $258 billion last year, accounting for almost one-fifth of the world's total spending of $1.3 trillion.

International tourist arrivals set a new record of 1.32 billion last year and the tourism sector has grown for eight years in a row, it added. The report did not detail nationalities of outbound travellers.

TOKYO: Japan's summer holiday season started in full swing on Thursday, with reservations for domestic trains and flights leaving Tokyo reaching a peak as travelers took advantage of a lack of coronavirus restrictions for the first time in three years.

Decorative lights for the Queen Mother