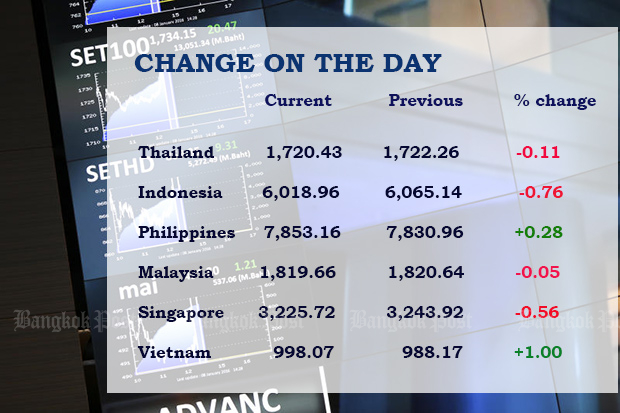 The deadline for public comment on US President Donald Trump's tariffs on another US$200 billion of Chinese goods is on Sept 5, with the new measures possibly taking effect next month.

The SET index dropped 1.83 points or 0.11% to 1,720,43, in trade worth 42 billion baht. The index snapped a three-session gaining streak, weighed down by consumer staples and energy stocks.

Indonesia's central bank has intervened in the foreign exchange market to keep the rupiah from depreciating too fast and too sharply, an official said on Thursday. The currency has lost about 7% this year.

The index of the country's 45 most liquid stocks was down more than 1%. Telekomunikasi Indonesia fell 2%, while Bank Negara Indonesia declined nearly 3%.

Singapore shares ended lower for a second consecutive session, weighed down by industrials and financials.

Philippines index climbed to an over three-month closing high, on gains in financial stocks.

Malaysian shares were largely flat as losses in telecom stocks offset gains in financials and energy.

Telekom Malaysia was the biggest drag on the index, sliding more than 7%.