The government is inching closer to fully unloading its hefty rice stocks after selling a combined 267,300 tonnes for animal feed and energy purposes at Thursday's final auction. 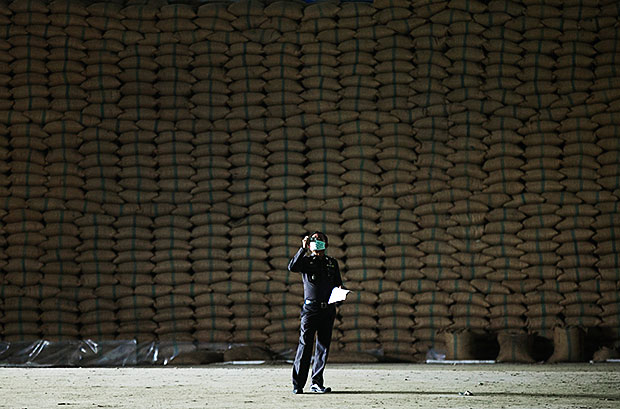 Commerce Ministry officials, police and the military carried out an inspection of state rice stocks at a warehouse in Bangkok’s Klong Sam Wa district in July 2015. SEKSAN ROJJANAMETAKUN

The government is estimated to incur a loss of at least 500 billion baht from the costly populist programme.

Manatsanith Jirawat, deputy director-general of the Foreign Trade Department, said five bidders offered the highest bids for 245,000 tonnes of inedible-grade rice for industrial use and animal feed that is being stored at 18 state warehouses, making up 100% of the amount.

Results of the final auctions will be forwarded to the panel handling the state rice sales next week, with approval by the Rice Policy and Management Committee scheduled for next month.

She said the department is about to finalise the exact amount of state rice stocks accrued by previous governments before the National Council for Peace and Order (NCPO) assumed management.

The State Audit Office, which was assigned by the Rice Policy and Management Committee to handle the audit of state rice stocks controlled by two key state agencies (the Public Warehouse Organisation and the Marketing Organisation for Farmers), reported on July 2, 2014 that the government controlled a total of 18.7 million tonnes.

But the audit committee set up by the NCPO to check state rice stocks later found that the supply totalled just 17.76 million tonnes -- indicating that 940,000 tonnes of rice were missing.

Adul Chotinisakorn, director-general of the Foreign Trade Department, said the department expects to conclude by September whether the stocks are actually missing or the initial estimate was incorrect.

The previous governments spent about 700 billion baht on similar schemes that offered to buy rice at higher-than-market prices.