Rising food and energy costs boosted inflation to 1.6% in August, the highest in almost four years, adding to the case for the Bank of Thailand to deliver its first rate hike since 2011.

The policy rate of 1.5% is now below inflation, making the economy only the second one in Southeast Asia, alongside the Philippines, to have a negative real interest rate. 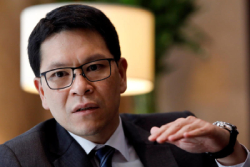 Thailand's Central Bank Governor Veerathai Santiprabhob is seen during an interview with Reuters at the Bank of Thailand headquarters in Bangkok, Thailand March 14, 2018. (Reuters file photo)

Despite this, recent comments from Governor Veerathai Santiprabhob have lowered the probability of an imminent rate hike. Mr Veerathai said in an interview on Aug 29 that the central bank doesn’t face immediate pressure to tighten monetary policy like other emerging-market peers.

The Indonesian central bank is also under pressure to raise interest rates. Data showed consumer-price growth in Indonesia was little changed at 3.2% last month; while that’s well within Bank Indonesia’s 2.5-4.5% target band and should offer some respite to policy makers, the rupiah’s slide to a two-decade low against the dollar will put pressure on the central bank to hike rates for a fifth time this year.

Nomura Holdings Inc economist Euben Paracuelles sees both central banks hiking rates this year. Inflation isn’t the “main driver of BI’s policy decisions at the moment” and the subdued figures don’t change his forecast of another increase at the September policy meeting, he said.

Nomura’s base case is also for a 25 basis-point increase in the Bank of Thailand’s policy rate on Sept 19.

Indonesia’s rupiah has slumped more than 8% against the dollar this year, while the Thai baht is down 0.4%.

The government on Tuesday reported the highest-yet daily Covid-19 related death toll, 35 fatalities, for an accumulated toll of 649, and 2,473 new cases, raising the total to 113,555 since the pandemic started early last year.