The pump price for diesel is officially capped at 29.99 baht yet again as government spends another 3.2 billion baht at a programme to hold down fuel prices until the end of the year. (File photo)

The Energy Policy Administration Committee (Epac) is capping the retail diesel price at 29.99 baht per litre beginning Thursday on concerns over rising global oil prices in the past six months.

Diesel is a key fuel across the country's transport and logistics system.

After global oil prices collapsed in 2014, the government stopped capping diesel prices. The policy is resuming for the first time in nearly five years.

The capping scheme is designed to subsidise diesel directly. The budget comes from the state Oil Fund at 30 satang per litre.

"Epac's outlook sees global oil prices staying under $80 per barrel until December, but once the price becomes higher than projected, Epac will discuss further measures," Mr Siri said. "If Epac had not decided to subsidise the diesel price, the retail price would be higher than 30 baht per litre." 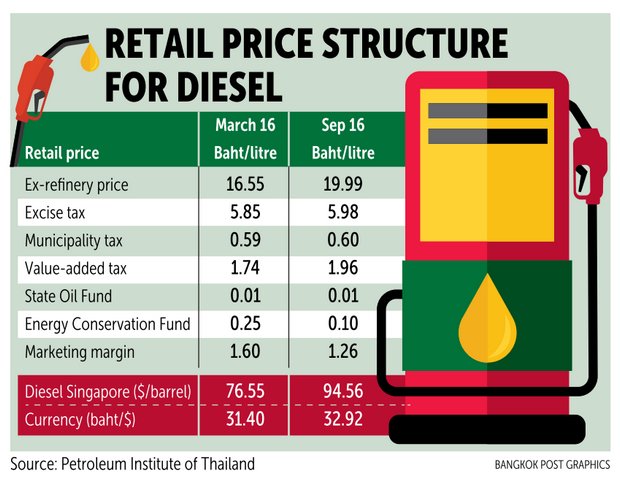 Mr Siri said Epac saw the overall domestic economy bottom out in 2014, and energy prices are a major fundamental in mobilising the economy, so while these measures remain very important, Epac will not use them extensively.

Saudi Aramco, the monthly price benchmark for cooking gas in Asia, has set its September Contract Price (CP) for propane at $600 a tonne, up $20 from the August CP.

The butane CP was set at $635 a tonne, up $40 a tonne from the August CP, the company said last Thursday.

This is the sixth consecutive increase for the butane CP, according to S&P Global Platts data.

Last September, Saudi Aramco set propane prices at $480 a tonne and butane at $500 a tonne.

In response to this, Epac is supporting a cap on cooking gas prices.

Yesterday it approved an additional sum of 3.2 billion baht for a cross-subsidy between oil users and cooking gas accounts for the remaining months of this year.

Cooking gas itself is a key commodity, having been party to major political decisions over the past two decades in order to maintain low prices for Thais.

Earlier, Epac enacted a 3-billion-baht cross-subsidy from the state Oil Fund's cooking gas account, but this budget was depleted to maintain the price cap, creating a loss of 300 million baht.

Epac estimates that the total cross-subsidy will not exceed 6.5 billion baht for July 16 until Dec 31.

As of August, the state Oil Fund's oil user account had 26.2 billion baht, down from 29.35 billion baht in July.

The account was established in order to promote biofuels by allocating levies from fossil-based oil users to biofuels, including the subsidies of gasohol E20 at 2.63 baht per litre, E85 at 8.98 baht per litre and biodiesel B20 at 3.5 baht per litre.

The energy price cap was announced in late May.

A fuel tariff for electricity was also capped at an average of 3.5966 baht per kilowatt-hour until December, according to the Energy Regulatory Commission.