Bangkok Bank (BBL), the country's largest commercial bank by assets, plans to more than double transaction capacity on mobile phones during peak periods by year-end to keep pace with the digital uptick and comply with the Thai Bankers' Association (TBA) agreement. 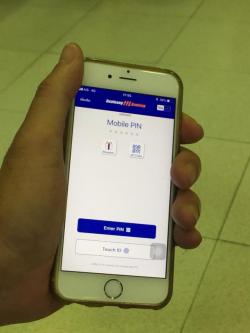 "Development of our mobile banking likely lags behind some of our peers, but security is the bank's focus to prevent any financial and non-financial impact and to build up customer confidence," he said.

The Banking Information Technology Club, an arm of the TBA, agreed to issue six practical guidelines, including to at least double the capacity of banks' financial transactions on mobile banking and the National Interbank Transaction Management and Exchange (ITMX), to prevent system crashes after last week's tech glitch.

ITMX's peak capacity stands at 500 transactions per second. It is the national gateway and switching service provider.

The other guidelines are to tighten each bank's internal management system; form a joint working group between banks and ITMX to specify clear conditions and guidelines for temporarily removing banks that have a system failure from the central system to prevent the problem from affecting other banks; developing a central dashboard to update the status of each bank's system; and informing member banks to ensure timeliness in preparation and problem solving.

Reviewing the design of mobile banking systems and displaying transaction status messages that are clear and easy to understand to avoid confusion are other objectives.

BBL's spending on IT investment averages 2 billion baht per year, Mr Deja said, adding that the partnership model is a key strategy to strengthen the infrastructure base for technology and IT under collaboration with banking partners, business partners and fintech firms, both locally and internationally.

Mr Deja said the bank has continued amortising investments for technology, so it does not need a large one-off investment. BBL has spent mostly on cybersecurity, he said.

The bank has more than 5 million mobile banking users and aims to reach 8 million by the end of this year.

Apart from capacity increases, the bank plans to adopt innovative technology and roll out new features for mobile banking.

BBL shares closed yesterday on the Stock Exchange of Thailand at 205 baht, up one baht, in trade worth 876 million baht.