The Stock Exchange of Thailand ended higher, while most Southeast Asian stock markets declined on Monday, with Singapore closing near a one-and-half-year low, as a potentially damaging escalation in the Sino-US tariff row weighed on investor sentiment. 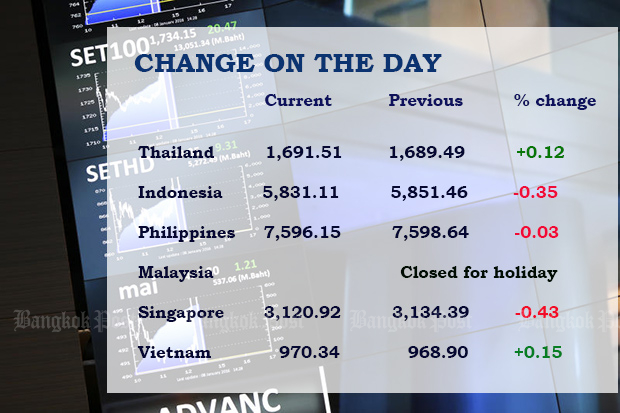 Asia shares ex-Japan also slipped, to a more than one-year low, as investors were jittery after US President Donald Trump said on Friday that he was ready to slap tariffs on virtually all Chinese imports into the United States.

Also, weighing on global shares was the prospect of faster rate hikes by the Federal Reserve after data released on Friday showed US job growth accelerated in August and wages notched their largest annual increase in more than nine years.

"Global emerging markets are being hit by fears of trade tariffs, and the FOMC meeting later this month would put further pressure on emerging markets," said Joel Ng, an analyst at KGI Securities, referring to the US Federal Open Market Committee's Sept 25-26 meeting.

Singapore stocks fell for a fourth straight session and posted their lowest close since late March 2017.

Philippine shares closed little unchanged after declining 1.7% to a near seven-week low in intraday trade.

Malaysia was closed for a holiday.