Despite buoyant growth during the first six months, Thailand's economy is projected to expand at a slower pace in the second half mainly because of external headwinds, says Credit Suisse Securities Thailand. 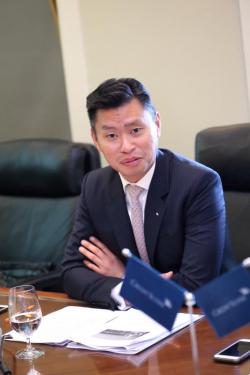 Mr Pornchai says Thailand will not be spared from US-China trade tensions.

"Recent macroeconomic data suggests [economic] growth will slow in the second half after a robust first half thanks to a slowdown in the external sector, [while] domestic demand recovery [is expected to] continue, albeit gradually," said managing director Pornchai Prasertsintanah.

Thailand will not be spared from an escalation of trade tensions between China and the US given the country's trade-sensitive economy, said Mr Pornchai.

Based on the forecast of the National Economic and Social Development Board (NESDB) of 4.5% economic growth this year, growth in the second half should be 4.2% after the 4.8% showing in the first half, according to the Bank of Thailand.

The NESDB in August reported economic growth of 4.6% for the three months to June and 4.8% for the first half.

Domestic inflationary pressure is anticipated to rise gradually on a recovery in private consumption, which will not pressure Thailand's central bank to embark on monetary policy tightening, he said.

A decline in farm prices appears to be fading and rising prices will provide support for a more broad-based consumption recovery going forward, said Mr Pornchai.

But concerns over domestic financial stability could be a catalyst prompting the central bank to begin normalising the policy interest rate next month, he said.

Concern factors for the next 12 to 24 months are a reduction in money supply stemming from how central banks in developed countries will reduce their balance sheets and slow down monetary stimulus programmes, as well as technological disruption and heightening geopolitical risks, said Mr Pornchai.

Despite having strong fundamentals among emerging market peers, Thai stocks are given an underweight outlook because of their high valuations, according to Credit Suisse Securities Thailand.

Chinese and Singaporean equities are given an overweight outlook compared to the Thai and US counterparts due to lower valuations, he said.

For other alternative investment assets such as fixed income, Credit Suisse Securities Thailand views that the government bond yield is likely to rise further given steady economic growth and some signs indicating higher inflation.