The state-owned Government Savings Bank (GSB) is expanding its network coverage by appointing Counter Service Co, a payment service provider wholly owned by CP All Plc, as its agent to take deposits and handle cash withdrawals. 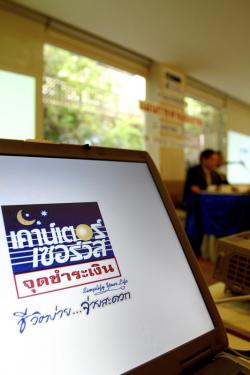 The bank aims for the banking agent to help expand GSB's customer base to 30 million in the next two years from 20 million now, said president and chief executive Chatchai Payuhanaveechai.

GSB customers aged 7-20, starting from October, can deposit up to 30,000 baht at 13,000 branches of Counter Service across the country, around the clock, free of charge, Mr Chatchai said.

Those above the age-20 threshold will be charged 15 baht per transaction.

The bank's customers can also withdraw up to 5,000 baht per transaction, not exceeding 20,000 baht a day, at Counter Service, most of whose outlets are in 7-Eleven convenience stores, from 8am to 10pm, but with a 15-baht fee per transaction.

The waiver for deposit fees is a year-to-year agreement with Counter Service, Mr Chatchai said.

The Bank of Thailand recently amended regulations to let banking agents provide cash withdrawals and deposits, with the aim of extending accessibility to those living in remote areas.

Banks can also capitalise on banking agents' extensive channels to reach customers at a lower cost than having to open brick-and-mortar branches.

The state-owned bank now has 1,070 branches nationwide, of which 950 are in provincial areas where 90% of the bank's customers live.

GSB aims for the banking agent to raise the ratio of young customers (aged 7-20) to 50% of the total in the next two years from 37% at the moment, as well as boost total customers to 30 million from 20 million.

Some 500,000 young customers are expected this year, Mr Chatchai said, noting that the group is the bank's main target.

To reach younger customers, the bank has supported the school banking scheme with 2.3 million student depositors.

In the meantime, Weeradej Ackapolpanich, assistant vice-president of Counter Service, said customers can use GSB's My Card feature in the bank's MyMo mobile app to withdraw money at Counter Service points.

Kasikornbank recently announced that its customers would be able to withdraw cash via their accounts at 964 Thailand Post outlets nationwide.