Confident in local and regional markets

Stuttgart-based Daimler AG is committed to investing in truck and bus assembly in Thailand's Eastern Economic Corridor (EEC) scheme, even though the local market is limited when compared with other Asian countries.

In Thailand, the Fuso truck sold 178 units over the first half, up sharply by 60% from the same period last year.

Last Tuesday, MFTBC announced construction of an assembly plant in Thailand at an investment cost of €12 million (455 million baht).

The plant will be in Rayong, one of the host provinces of the government's flagship EEC. MFTBC aims to acquire land sufficient for a 6,000-7,000-square-metre facility.

Production capacity is targeted at 4,000 assembled trucks and buses a year, mainly for the Fuso brand.

The Rayong plant will produce Mercedes-Benz trucks in the future, so the operation is dubbed Daimler Commercial Vehicles Manufacturing Thailand.

Construction at the plant for completely knocked-down vehicles is scheduled to begin in October, and output will begin in November 2019 for the FJ 2528C model.

Hartmut Schick, head of Daimler Trucks Asia, said the company has a long-term plan to invest in Thailand as it is confident of the Thai truck market's potential. 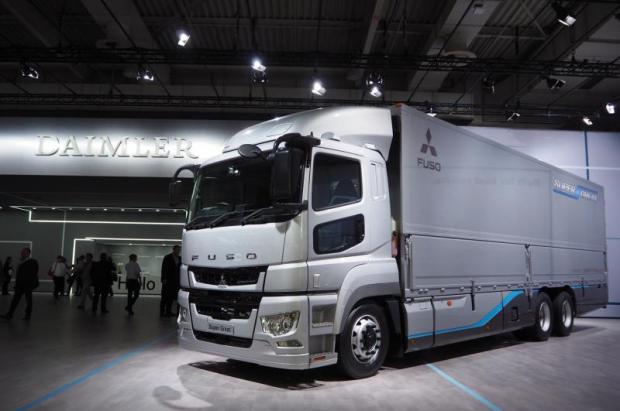 With the new assembly plant in Rayong as a foundation, Daimler is upbeat on the Fuso truck brand in Thailand. Wassana Nanuam

"We do not hesitate or worry about the Thai political situation or the upcoming national election in February 2019 because we are confident in the Daimler team operating in the country," Mr Schick said at a media roundtable on "Transforming Transportation, Daimler, IAA Commercial Vehicles 2018" in Hanover, Germany. "Thailand constitutes a key crucial market for Daimler's growth strategy in Southeast Asia."

In August 2016, Daimler set up a local company for its commercial vehicle business after ending a seven-year relationship with Hong Kong-listed Tan Chong International Ltd, which had served as the authorised manufacturer and distributor of Fuso trucks in Thailand.

DCVT recently took over the bus and truck business of Mercedes-Benz Thailand, which concentrates on passenger car distribution.

Mr Schick said the construction of the assembly plant is the first important milestone in Daimler's commitment to customers in Thailand.

The second one is a step to consolidate Daimler's commercial vehicle business in line with a plan named "customer dedication strategy" to offer local customers unsurpassed products and services as part of efforts to bring back customer confidence.

"We are upbeat on both Fuso and Mercedes-Benz trucks in Thailand," Mr Schick said.

The Fuso brand is positioned in the light-duty, medium-duty and heavy-duty segments, while Mercedes-Benz will involve heavy-duty trucks of over 300 horsepower and buses.

DCVT plans to further expand the network to 14 dealers and 24 sub-branches nationwide from 10 dealers at present.

Separately, Daimler has a showcase for new safety technologies such as preventive brake-assist systems, side-guard assist and Active Brake Assist 5 with a multimedia cockpit.

On a global level, Daimler has launched advanced trucks with safety technology and connected technology such as the Urbanetic van with an autonomous driving system.

For the Fuso truck, it comes with the Vision one, an electric heavy-duty truck, and the eCanter, a light-duty truck.