While the Mineral Fuels Department announced the bids received for operating new gas fields, dozens of people rallied at the gate and outside the meeting room to demand a change in auction terms they say favours Big Oil and prevents government from getting the most favourable terms. (Photos by Kitja Apichonrojarek)

US-based Chevron Corp and Thailand's PTT Exploration and Production (PTTEP) were the only two contenders that submitted opening bids Tuesday to compete in the auctions of Bongkot and Erawan concessions in the Gulf of Thailand.

France's Total SA, which has a 33.3% stake in the Bongkot field and previously submitted an intent to bid, did not submit bids.

In the Erawan (G1/61) concession, a joint bid from PTTEP and its partner, the UAE's Mubadala Petroleum, will face a bid from Chevron and partner Mitsui Oil Exploration, a Department of Mineral Fuels statement said.

PTTEP, through its subsidiary PTTEP Energy Development, submitted a solo bid for the Bongkot (G2/61) concession to compete with Chevron and Mitsui's joint bid.

Auction winners will be approved by the cabinet in December.

Chevron operates the Erawan gas block through its subsidiary Chevron Thailand Holding, and state-backed PTTEP operates the Bongkot concession, due to expire in 2022 and 2023, respectively. 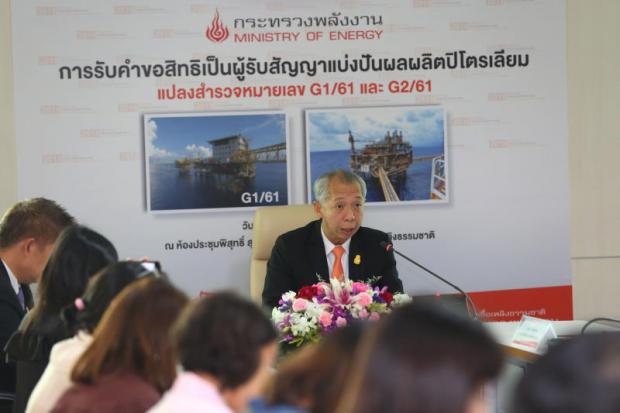 Mineral Fuels Department director-general Veerasak Pungrassamee speaks to the press after the submission of bids for the gas field auction.

Veerasak Pungrassamee, director-general of Mineral Fuels Department, said each bidding document consists of four envelopes: qualification under the Thailand Petroleum Act; exploration and production (E&P) technique; local staff employment at a minimum of 80% and up to 90% in another five years; and gas price and profit-sharing sharing to the government.

In the screening process, gas price to the state will have 65% weight, while profit-sharing will have 25% weight, following a 5% weight each for bonus or special payment to the government and local staff employment.

"Under the auction's terms of reference, the government is also requesting to make a joint venture with a 25% stake in each gas field through state-owned enterprises, but the cabinet will approve the request after the winning bidders are announced," Mr Veerasak said.

He said Total may see little potential in the offshore gas field in the Gulf of Thailand in the near future, resulting in the company not participating in the auctions.

The department will take two months to screen all proposals and will select possible winning bids by November.

The National Energy Policy Council chaired by the prime minister will consider and approve the winning bidders in December and company names will be announced in the same month.

Two 10-year contact signings are scheduled for February as the ministry planned earlier, but daily gas production will be trimmed to 1,500 million standard cubic feet per day from 2,150.

Pairoj Kaweeyanun, president of Chevron Thailand Exploration and Production, said Chevron, as the existing operator, will offer its latest E&P technology to be implemented in both gas fields.

"Chevron has operated its E&P business in Thailand for several decades and energy policymakers have seen the company's work -- we expect to win this upcoming auction," Mr Pairoj said.

Somporn Vongvuthipornchai, chief executive of PTTEP, said the company has 25 years of experience in E&P activities and it can supply natural gas with competitive prices in the near future, even though the country's gas fields are nearing depletion.

The two gas fields are the vital resources, with a combined natural gas production that represents 60% of Thailand's total output.

"PTTEP has prepared for this auction for a long time, putting in a lot of effort in terms of human resources, capital expenditures, E&P techniques and business plans," Mr Somporn said.

"PTTEP did not decide to enter a joint venture with Chevron for the Erawan field, instead deciding to team up with Mubadala and bid for the Bongkot field alone."

The Gulf of Thailand has wet gas that boasts very high petrochemical content. Similar to dry gas, wet gas can be used to generate electricity or fuel vehicles, but can also be converted into plastic parts such as prosthetic devices. But the cost of generating plastic from gas is 4-7 times greater than from petroleum.

The Mineral Fuels Department estimates that the winning bidders will have combined capital expenditures and working capital of 1.2 trillion baht over the next 20 years and bring in 800 billion baht in revenue to the state.