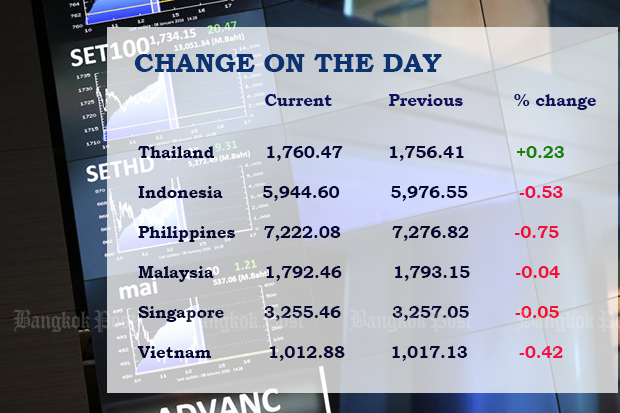 China's factory sector stalled after 15 months of expansion and export orders took a hit, according to a private survey, in a worrying sign that the trade war with the United States was taking its toll on the country's economy.

Overall, trading in the region was lean due to holidays in China and Hong Kong.

Meanwhile, United States' negotiations with Canada ended on a positive note, with the countries forging a deal to salvage the North American Free Trade Agreement (Nafta) deal as a trilateral pact with Mexico.

However, concerns over the Sino-US trade dispute continued to weigh on risk appetite in Southeast Asia.

Investors expect that the Nafta deal will improve the trading climate, said Manny Cruz, an analyst with Asiasec Equities Inc.

The Stock Exchange of Thailand index closed 4.06 points or 0.23% higher to 1,760.47, in trade worth 53 billion baht. The market was helped by the energy and materials sectors, with  PTT Exploration and Production Plc was the top performer on the index with a 3.2% gain.

Philippine shares closed lower ahead of inflation data due at the end of the week, with conglomerates SM Investments Corp and Ayala Corp sliding 2.7% and 1.9%, respectively.

Fio Dejesus, an analyst with Manila-based RCBC Securities, said inflation data, which by consensus estimates is expected to be higher than last month’s figure, could prompt another rate hike by the central bank and that may hurt real economic growth apart from increasing companies' interest outgo.

The country's central bank raised interest rates for a fourth time in five months last week and kept the door open for further tightening as it battles inflation.

Earlier in the day, data showed Indonesia's September inflation cooled to the lowest in over two years.