Travellers check the departure board at Suvarnabhumi airport. Photo by Pattarapong Chatpattarasasill

Airlines are launching marketing efforts and promotions to capitalise on higher projected arrivals in the coming high season.

Thailand remains a major gateway for premium and low-cost carriers, with the peak travel season running from this month until the end of March next year.

The expansion into the Indian market is aimed at attracting more Indian tourists in Thailand. The number of visitors from India stood at 1.41 million last year, up 18% from the year before.

The Tourism and Sports Ministry reported that spending from Indian visitors rose more than 23% in 2017 to 64 billion baht, and the market is set to expand significantly. 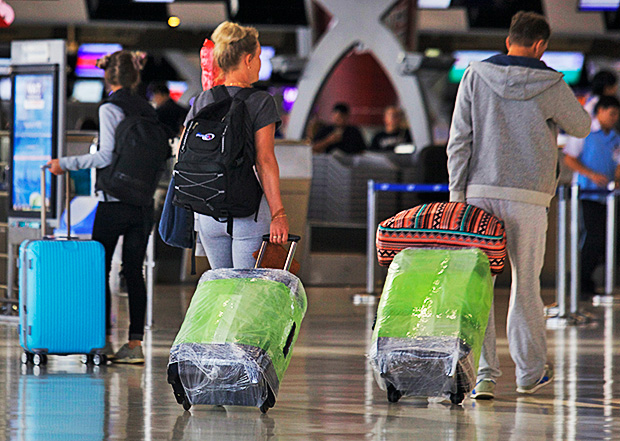 "[Thai AirAsia] is expanding in the Indian market in light of strong growth potential and as Indian travellers are already the sixth-largest group to visit Thailand annually," Mr Santisuk said.

Thai AirAsia flies direct to India from Bangkok on five routes: Chennai, Bengaluru, Kolkata, Jaipur and Kochi. Some 80-90% of passengers on the routes are Indian, and they help maintain a load factor of 87%.

Stefan Molnar, general manager of sales for Thailand, Vietnam, the Philippines and the Mekong region at Lufthansa Airlines, said the German carrier will increase the frequency of Bangkok-Munich flights to daily service, starting in the summer of 2019.

The new long-haul connection will add more than 2,000 seats a week between the Thai capital and southern Germany. Lufthansa Group has 31 weekly flights from Thailand to Europe.

Last month, Air Italy started flights on the Bangkok-Milan route, making it the first Italian airline to fly to Thailand. The airline plans to have four flights a week using Airbus A330-200s to tap high demand for the route, including from holidaymakers, pensioners and business travellers from Italy and Europe who want to visit Thailand, plus many Thais keen to visit Europe.

The Tourism and Sports Ministry recorded 6.5 million visitors from Europe in Thailand last year, a 5.5% year-on-year gain. For the first eight months of this year, more than 4 million tourists came from Europe, representing growth of 5.6% year-on-year. The top markets are Russia, Britain, Germany, France, Sweden, Italy and the Netherlands.

Vietjet is promoting a new route from Bangkok (via Mumbai) to Manchester from Nov 4 onwards.

Qatar Airways has upgraded from five A350-900s to the bigger A350-1000 version. This latest endorsement for the largest member of Airbus's A350 XWB family reflects the airline's need for growth and capacity at the best comfort and efficiency levels available.

The amended order reinforces Qatar Airways' position as the largest A350-1000 customer, with a fleet of 42 aircraft.

"Qatar Airways upgraded five previously ordered A350-900 to the more recently launched A350-1000," said group chief executive Akbar al-Baker. "Since taking delivery of the world's first A350-1000 in February, we have been happy the aircraft's performance."

The Tourism and Sports Ministry reported that Thailand received 25.8 million tourists during January to August, up from 23.5 million in the same period last year or a 9.9% increase.

The government hopes to receive 37-38 million international tourists this year, up from 35 million in 2017. But frequent accidents have been a wake-up call for local authorities to improve safety and security, especially for marine tourism at popular destinations such as Phuket.

After a boat capsized off the resort island, killing 47 Chinese tourists, Thai authorities tightened security measures to bolster confidence among tourists and reclaim the Chinese market.

Pongpanu Svetarundra, permanent secretary for tourism and sports, said 180,807 Chinese tourists travelled to Thailand during Oct 1-7, which was a long holiday in China.

The arrivals were lower than expected, and Mr Pongpanu attributed the decline to factors such as fluctuations in the yuan and concerns over the trade situation between the US and China.

In addition, China's economy has hit a rough patch, reducing the number of arrivals.

Mr Pongpanu said Thailand was not alone in experiencing a decline, as Vietnam also faced a similar situation with Chinese travelling to Vietnam down 1.6% from the same season last year.

"The ratio of independent tourists to tour groups changed from 60:40 to 70:30 this year," Mr Pongpanu said. "This is a positive indicator for tourism as individuals usually spend more money than groups."