The Federation of Thai Capital Market Organizations (Fetco) is conducting a feasibility study to prepare an "exit strategy" to mitigate possible investment outflows if the Finance Ministry does not extend the tax deductions for long-term equity fund (LTF) investment next year.

Fetco agrees with the government that tax deductions for LTFs should be revised to fit the current context, said chairman Paiboon Nalinthrangkurn.

"LTF unit holders will have to make their own sales decisions, but an exit strategy will at least help cushion the impact of panic selling if the tax deduction expires at the end of next year," Mr Paiboon said.

Taxpayers are permitted to deduct contributions to LTFs and retirement mutual funds (RMFs) worth up to 500,000 baht each or no more than 15% of annual taxable income, whichever is lower.

To obtain the tax deduction, individuals must hold LTF units for at least seven calendar years, except where the unit holder is incapacitated or dead. 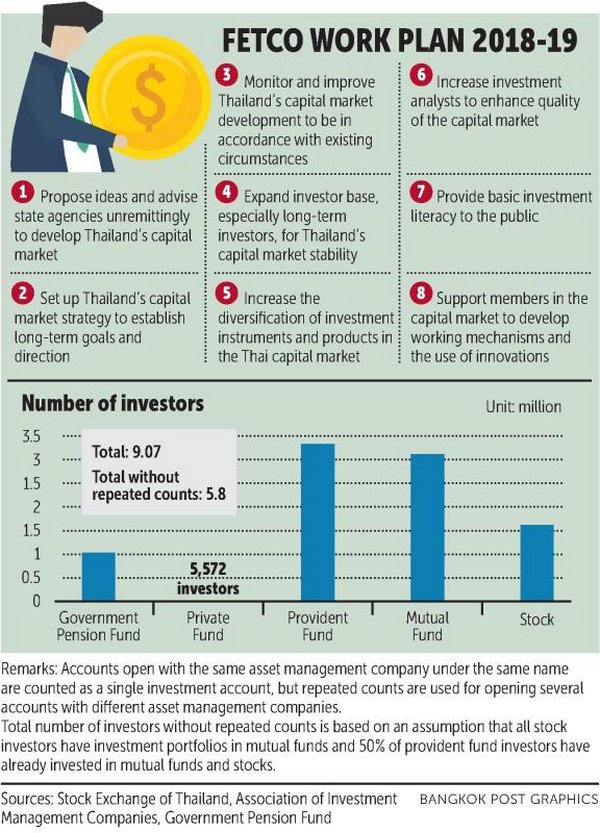 Outstanding investment in LTFs registered at 390 billion baht at the end of September, Fetco said.

Investment flows into LTFs typically number 70-80 billion baht a year. If the tax deduction expires this influx may disappear, which would be a pity as the deduction attracted new investors in the past decade, said Mr Paiboon.

Tax deductions for investment in mutual funds also help expand the base of domestic investors, which subsequently supported the capital market's stability, he said.

Mr Paiboon said there should be a new investment fund focused on benefiting low- and middle-income earners, as LTF benefits are mostly concentrated among those in higher income brackets.

Fetco is studying the possibility of a new investment scheme to attract greater savings among low- and middle-income earners in the capital market amid Thailand's greying demography.

That number is a mere fraction of Thailand's population of 68 million, Mr Paiboon said.

Apart from retail investors, the Thai capital market needs to build a base of institutional investors, especially long-term investors, as the total equity holdings of mutual fund investors are just 9.7% of total market capitalisation, he said.

"Some regulations that act as obstacles should be revised, along with regulations that prohibit associations, foundations and cooperatives to invest in the capital market," Mr Paiboon said. "Mutual fund investments could be a good start for them to earn better investment returns."

The government should also support expanding the base of foreign investors in pension funds and insurance schemes, he said.

Fetco plans to give suggestions to the government about Thailand's capital market development and prepare a strategic master plan for the capital market.

"The capital market should have a long-term strategy, as it can be a compass for all market participants to move in the same direction," Mr Paiboon said.

Thailand is implementing the third edition of the Capital Market Master Plan (2017-21). This edition should be revised in order to keep up with changes in the financial landscape such as initial coin offerings and cryptocurrencies, Mr Paiboon said.

Fetco will also push related parties to establish the Investment Analyst Academy and create a new generation of analysts to serve companies that are not under brokerage firms' coverage.

"The industry lacks analysts," Mr Paiboon said. "We have 2,478 securities and 757 listed companies, but only 280 analysts are available, a decline from 340 analysts seen during the past 10 years."