A sustainable economic model based on recycling, remanufacturing and reuse is gaining adherents around the globe and in Thailand.

A Green Strategy sign is displayed at an exhibition in Bangkok. CHANAT KATANYU

While a growing population and robust economic growth rate are desired by many, the consequences of such drastic developments can take a toll on society and the environment, as seen through rising pollution, rampant poverty and resource scarcity.

With the future edging closer as an unsustainable black hole, a model is being developed to provide mankind with a glimpse of light at the end of the tunnel.

A circular economy is a regenerative system in which resource inputs and waste, emissions and energy leakage are minimised by slowing, closing and narrowing energy and material loops. This can be achieved through long-lasting design, maintenance, repair, reuse, remanufacturing, refurbishing, recycling and upcycling.

A circular economy differs from a linear economy, which has a "take, make, dispose" model of production.

Under the S-curve policy, the circular economy will be applied to 11 targeted industries, as the ministry believes that the model can bring about economic sustainability in the long run, in line with global trends.

Nattapol Rangsitpol, director-general of the Office of Industrial Economics (OIE), said the circular economy will increase competitiveness and efficiency and add value to Thailand's industrial sector.

"With reused and recycled products instead of using new resources, every industrial operator should comply with the government's circular economy because of the benefits to society and the environment," Mr Nattapol said.

Eria has analysed circular opportunities in cities and particularly in the manufacturing, agriculture and forestry sectors across Asia.

According to Eria, the adoption of circular economy principles could lead to economic growth of US$324 billion and create 1.5 million jobs in those cities and sectors in Asia over the next 25 years.

Germany is among the leaders of the concept. The waste management industry in the country generated about 200,000 jobs in 2016, with money circulating in the economic system worth more than €40 billion, according to think tanks. 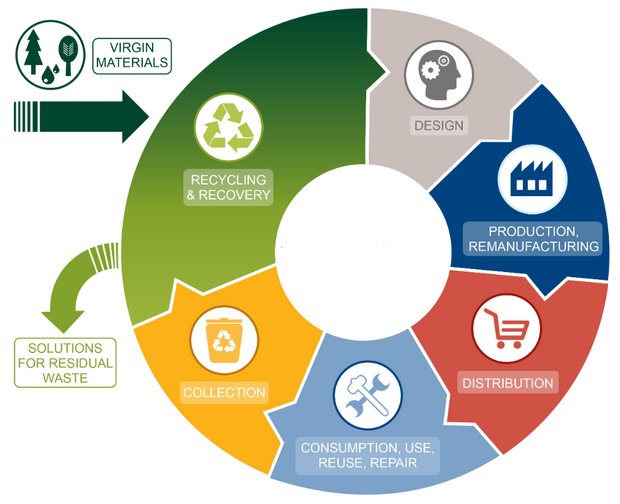 China has also increased the use and recycling of waste products, with its promotion of rubber tyre recycling an outstanding example, Eria said. In the light of increased waste from the rapidly expanding transport sector, the Chinese government in 2008 provided a VAT exemption to all businesses that retreaded old tyres or produced rubber powder from used tyres.

With such positive prospects, the Industry Ministry last month announced a promotion of newly targeted industries as part of the circular economy initiative.

Mr Uttama said the government is concerned about how industrial development will have an impact on society and the environment; therefore the government wants to promote the circular economy concept as a guideline for the private sector to follow.

The ministry has ordered the OIE to come up with a strategy and roadmap for the circular economy, together with requesting Board of Investment (BoI) cooperation on designing a package of investment privileges.

"The ministry expects the roadmap and strategy to be completed within October," Mr Uttama said. "Once they receive government approval, the cabinet will assess the plans before concluding the final approval."

The circular economy is a concept that can potentially help solve problems associated with scarcity of natural resources, subsequently inducing social and environmental sustainability.

The circular economy concept has been known throughout the private sector for at least three years, embraced by leading businesses such as Siam Cement Group, Indorama Ventures and PTT.

Deputy Prime Minister Somkid Jatusripitak said state agencies and the private sector alike should pay more attention to the circular economy because environmental concerns have become a global issue affecting citizens all over the world.

According to Mr Somkid, the government has already tasked the Industry Ministry and the BoI with studying investment privileges for projects involved with environmental protection and social development, in compliance with the 20-year National Strategy (2018-38) and ongoing social and economic reforms.

Under the 20-year plan, the government aims to narrow the widening income disparity gap to 15 times from the current 20. The plan particularly focuses on the richest 10% and poorest 10% in Thailand.

"I have already instructed the BoI to study investment privileges for projects involved with environment protection and social development," Mr Somkid said. "But more importantly, the circular economy and environmental concern should be instilled not only in businesses, but also younger generations and Thai society as a whole."

State policies and incentives, however, usually take quite a long time to jump-start, Mr Somkid said, citing how the digital economy initiative has taken about three years to attract interest from the public and businesses.

It will be much better if Thai society learns to protect and conserve environmental well-being, he said.

Besides reducing the use of new raw materials in production plants and product recycling, upgrading technology to create new innovations for maximising efficiency is part of the circular economy concept.

Richard Jones, vice-president and head of investor relations at IVL, a maker of polyester and plastic packaging material, said the circular economy is a model to build economic, natural and social capital.

The concept is based on three principles: waste and pollution control; keeping products and materials in use; and regenerating the natural system.

"IVL is ready to support the government policy that wants to promote the circular economy in the 11 targeted industries in Thailand," Mr Jones said. "The company believes that it will be a success in the future because the government can push forward this initiative faster than the private sector.

"The company has moved forward towards becoming a global leader in manufacturing 100% recyclable polyethylene terephthalate (PET) bottles and other sustainable materials."

At present, IVL has operations in 29 countries worldwide, with 85 petrochemical plants in the Asia-Pacific region, the US and Europe, along with 11 research and development centres. The company reported total revenue of US$8.4 billion in 2017.

The globally diversified portfolio of IVL manufacturing plants accounts for the company's total production capacity of 14.5 million tonnes per year.

With concerns over rising plastic waste, IVL has built the first of its recycling facilities in Nakhon Pathom province, a greenfield project with a capacity of 29,000 tonnes per year.

The facility is aimed at reducing greenhouse gas emissions, reusing plastic waste and recycling used PET bottles for the production of polyester fibres and filaments.

The recycled products from this site also serve end markets for packaging, fabrics, fillings and non-woven textiles and industrial products. 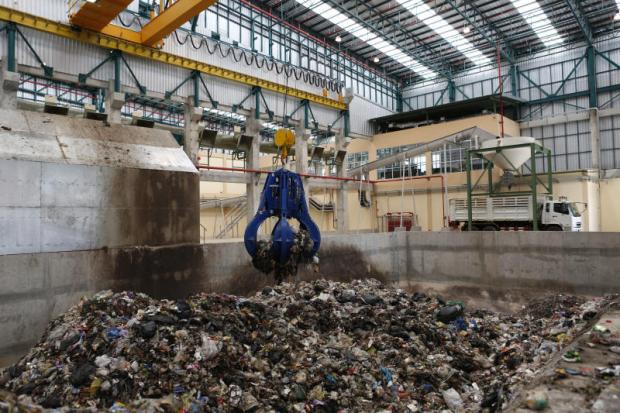 At present, IVL has large-scale capacity to recycle 350,000 tonnes of PET bottles per year in Europe.

"Thailand's PET recycle plant exports PET recycle products to Europe because it has a strong demand-driven growth in the European market," Mr Jones said. "On the other hand, the domestic market still has no demand in the commercial market."

But Thailand has more opportunities for PET recycling and adopting the circular economy concept, he said.

"We hope Thailand can be a leading exporter for PET recycling and can facilitate commercial sales in Thailand as well," Mr Jones said. "Thailand has a strong position in food and tourism, so these sectors can expand demand for PET recycling products."

One snag: selling recycled PET products to food and drink companies in Thailand is illegal under Department of Industrial Works regulations, as the department does not approve such products for use as packaging.

"It is a conflict between the law and circular PET recycling products," Mr Jones said. "The government should solve this problem."

Another Thai petrochemical giant is conducting a feasibility study of building a plant for recycling PET bottles in an attempt to push forward the circular economy concept.

"We are seeking a business partner who is interested in investing in a circular economy business," said Warawan Tippawanich, senior vice-president for corporate affairs at PTT Global Chemical Plc (PTTGC).

At present, the company is turning used PET bottles into textile products and even making T-shirts from discarded bottles.

A tonne of PET bottles can yield roughly 5,000 T-shirts, according to Ms Warawan.

"PTTGC has partnered with local people and a provincial administration in Koh Samet in Rayong province, where the company has a petrochemical production plant," she said. "PET bottles used around the island and dumped in the sea are collected to produce T-shirts, which we give to charity and sports groups."

PTTGC plans to expand its model to other areas to collect used PET bottles and plastic waste to supply the recycling plant in the future.