The Japan External Trade Organization (Jetro) aims to persuade Japanese seafood investors to set up a seafood processing hub in Thailand in a bid to expand into new markets in Southeast Asia and the Middle East.

Thailand has strong competition in the Japanese food segment and can serve as a gateway to other countries, said Hiroki Mitsumata, president of Jetro Bangkok.

"Thanks to popular Japanese food and cultural trends, most companies are interested in investing in Thailand, while the seafood itself has become very famous in the global market," Mr Mitsumata said.

He said the number of Japanese restaurants in Thailand has increased every year because of support from both local diners and Japanese expats.

"We are confident that the number of Japanese restaurants will increase further and that this trend will beef up the volume of seafood imports from Japan into Thailand, so the country's sentiment means it has the capability to be the seafood processing hub for Asia," said Mr Mitsumata, also Jetro's chief representative for Asean.

He said Thailand is a key destination country for Japan not only for food, but also agricultural products.

Thailand ranks sixth as an importer for Japan's food and agricultural products, Mr Mitsumata said, citing figures from the first eight months of 2018.

Jetro reported that shipments of food and agricultural products from Japan stood at 238 billion baht worldwide from January to August, while the value for Thailand totalled 7.92 billion baht, up 21.6% from the same period last year.

In 2017, Japan exported food and agricultural products to the tune of 115 billion baht, of which Thailand accounted for 11.52 billion.

The top destinations for Japan's food and agricultural products in 2017 were Hong Kong, mainland China, the US, Taiwan, South Korea and Vietnam.

In a related development, Jetro organised a business matching for Japanese food producers, ending today, to bring together 56 Japanese companies and foreign buyers from Myanmar, the Philippines, Laos, Cambodia and the United Arab Emirates.

"Twenty-five Japanese companies have yet to invest in Thailand, and they are interested in any local opportunities for their business presence soon," Mr Mitsumata said. "For Japanese investors, food and agricultural products will be a new opportunity for them, similar to other made-in-Japan products such as consumer, personal care and cosmetics." 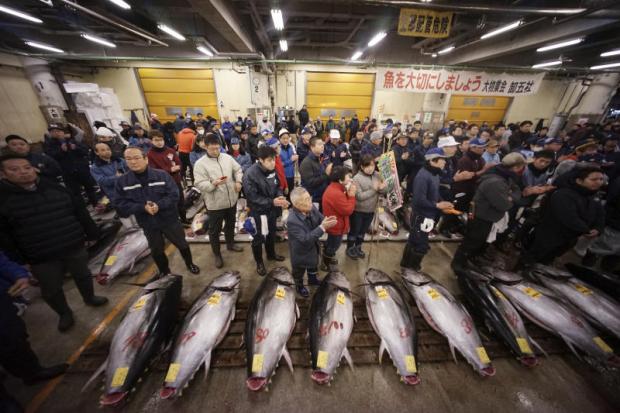 A ritual hand-clapping for the first auction of fresh tuna of 2018 at Tokyo's Tsukiji market, which closed this month. Japan envisions Thailand as a seafood processing hub. AP