A broadcast veteran channelling his energies

TV Direct chief executive Songpol Shanmatkit fires a shot across the bow of a home shopping rival. By Komsan Tortermvasana

Home shopping operator TV Direct Plc sprang a surprise last month when the company led by Songpol Shanmatkit announced it was taking over 90.1% of Spring News' digital Channel 19 in a deal worth 1.08 billion baht.

The process is expected to be completed by the end of this year. Founded in 1999 with capital of 1.2 million baht, TV Direct will soon become the owner of Channel 19.

The latest move is aimed at directly competing with a major home shopping rival, Channel 8. 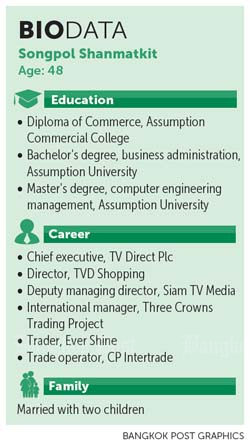 Mr Songpol, 48, has always been fascinated with numbers. He takes a small notebook with him wherever he goes, inspired by Bob Robertson, the owner of TV Media in Singapore. They once worked together on Siam TV Media, a joint venture of Siam Commercial Bank (SCB) and TV Media Singapore.

"If you seriously monitor the business operations through daily figures, you will never face a mistake," he says. "The number itself cannot deceive you, but crooked guys can give you a fake number."

Mr Songpol spoke to the Bangkok Post about his experiences.

Q: How did you enter the TV shopping business?

I started my first job at CP Intertrade Company of CP Group in 1988 when I was 18 years old after graduating with a Diploma of Commerce at Assumption, as a trade operator of frozen chicken exports to Japan and liberalised countries.

In 1990, I was transferred to be a trader at Ever Shine, another subsidiary of CP Group. Later, when Ever Shine closed, the parent company gave a chance to employees to continue working at two subsidiaries of CP Group: CP All, which operates 7-Eleven convenience stores nationwide, and TelecomAsia, the former name of True Corporation.

I decided to quit and go work at Three Crowns Trading Project, persuaded by a friend. I worked for there for four years, with my last position as international manager responsible for managing a racing project.

But the turning point came in 1995 when I joined Siam Tele Marketing, a subsidiary of SCB, as deputy managing director.

I stepped into the TV shopping business from there.

All TV shopping in Thailand back then was operated via spot advertising through the four major terrestrial TV stations.

In 1996, I and my team were assigned to negotiate with Bob Robertson, owner of TV Media Singapore, which was a successful model of TV shopping, to establish a joint venture company.

The deal was accomplished. Siam Tele Marketing was renamed Siam TV Media in 1997, with 65% held by SCB and me and 35% by TV Media.

I was deputy managing director of Siam TV Media. The infomercial programmes of TV shopping under Siam TV Media were successful with 30 minutes of airtime for each.

Q: What was the turning point of your business life?

In addition, a venture capital fund, H&Q, took over TV Media Singapore, followed by a big turnaround plan and cost-efficiency management. Consequently, Siam TV Media's shareholding was restructured, with 65% held by TV Media and 35% by SCB and Thai shareholders. 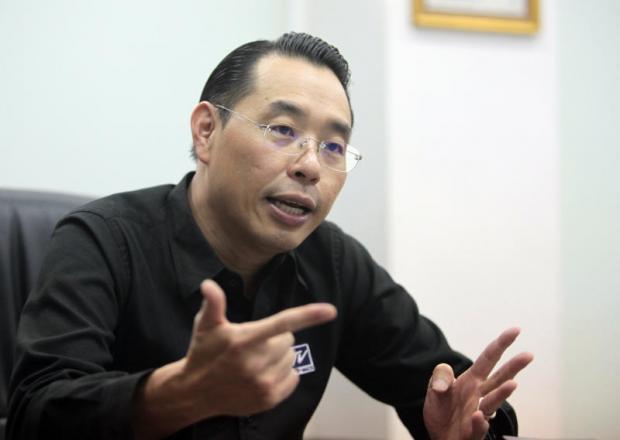 I was 29 years old back then, and I decided to quit and was ordained for two weeks. I later set up TV Direct with an initial budget of 1.2 million baht. The company was initially run under a mixed model through the working experience of the team, especially experience with TV Media Singapore and TV shopping models in several countries.

The second turning point came in 2006, when I and my team at TV Direct established a logistics company, Winstore Retail Network, with partners in order to create a logistics loop for direct marketing. A conflict happened among shareholders, and I then quit, but TV Direct had to be responsible for 88 million baht.

Q: What is the real goal of the latest move?

I want to directly compete with Channel 8, owned by SET-listed RS Plc under the Chetchotisak family.

The overall domestic market for home shopping and TV shopping business this year is 13 billion baht. TV Direct is set to have total sales revenue of 4 billion baht, while Channel 8 will have 3 billion.

However, owning a digital TV channel was the only core advantage that RS had over TV Direct.

After the takeover process is complete, Spring News Channel 19 will be operating under the concept of an infotainment and news channel under TV Direct.

The existing name of Spring News Channel 19 will be renamed to better reflect the new positioning of the channel, focusing on TV and home.

Besides strengthening the home shopping business, the acquisition was driven by three reasons: consumer behaviour, the TV business itself and competitiveness.

Consumer behaviour has changed to virtual shopping. The TV business has never died, it just changed the way Thai audiences view the content. The deal helps foster competitiveness of TV Direct to do battle in the next level of TV shopping, as well as creating a new revenue model and boosting yield for TV business.

TV Direct will become an omni-channel for online-to-offline and offline-to-online sales driven by digital transformation in the next 10 years, in what is called "really virtual shopping".

Q: How would you describe your management style?

I created my own business with passion and have a strong belief in precise data through experience. Also, working hard is a key factor of any achievement.

I do work with my best effort and precision support, then let the result be.

Q: Who is your role model?

I have had several role models for work and life, but only three guys are the most influential to my working style and personality.

Bob Robertson, owner of TV Media Singapore. I met him for the first time in 1996 after I was assigned by Siam Commercial Bank to negotiate with Mr Bob for acquiring a stake in TV Media. 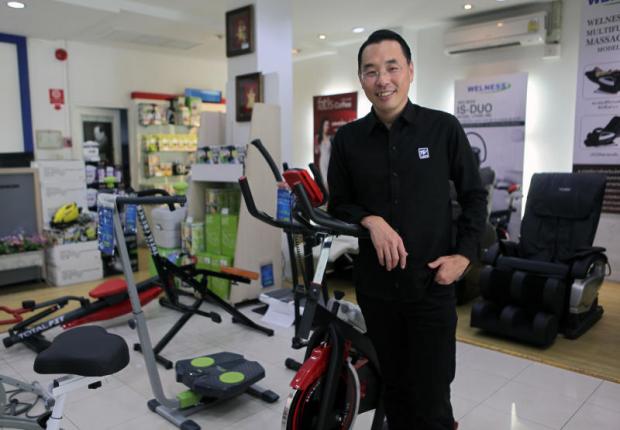 Mr Bob taught me to take care of numerical data related to operations. He called me and my team for daily meetings to discuss and evaluate the movement and performance of numerical data, via Microsoft Excel and not any advanced data analytics system.

Pravit Maleenont, a member of the executive board at BEC World Plc, who taught me through his very humble personality. He respects everyone.

Sanan Angubolkul, chairman of Srithai Superware Plc, from whom I learned about social connections.

Q: How do you spend each day?

I work six days a week, mostly meeting and discussing with the management team monitoring operations.

Apart from routine work, I prefer running in a variety of mini-marathon programmes. Going to the cinema is also my favourite relaxing activity.

Q: What does the future hold for you?

I plan to retire in the next seven years, when I am 55 years old, and become a smart farmer operating farming business with technology.

I own approximately 20 rai in Saraburi province, in my hometown, and I am prepared to do farming after retirement.

I plan to spend time reading more than 100 interesting books that I have yet found the time to read thoroughly.

After my retirement, my brother Pongchai Shanmatkit will be responsible as the leader of TV Direct in the future. Pongchai is now head of the TV shopping business for the company. I am considering another professional in the company to help him.