The government remains adamant the country's overall exports will exceed 8% growth as targeted despite shipments falling 5.2% year-on-year in September, the first dip in 19 months.

Deputy Prime Minister Somkid Jatusripitak said on Monday he still believes Thailand's exports will meet the target if the country can earn more than US$20 billion (655 trillion baht) a month in the final three months of the year.

"September's export contraction stems largely from lower shipments to China and gold exports," he said. "A high base also affected the performance of exports last month."

Thai exports in September last year surged 12.2% year-on-year to a record-high of $21.8 billion, as demand increased in all traditional and emerging markets.

Mr Somkid also expressed growing concern about the sagging Chinese economy, which may affect Thai exports and tourism in the remaining months and next year. Higher oil prices and interest rates, as well as slowing global economic prospects, also pose threats to the Thai economy next year, he said.

Pimchanok Vonkorpon, director-general of the Trade Policy and Strategy Office, said September's dip was largely because of a large base last year, a gold export decrease, and the impact of the trade war between the US and China. 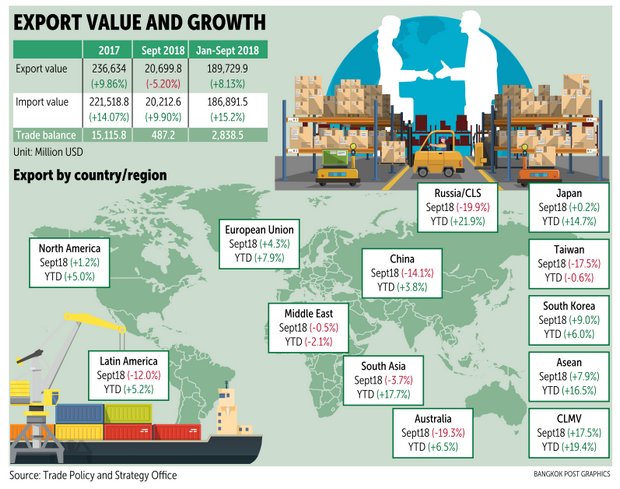 Exports to Asean grew favourably, while exports to the US maintained positive momentum from the last two months and registered 1.2% growth.

Export growth to other markets showed a slight contraction, especially to China, where the economy has encountered escalating challenges on both domestic and international fronts.

Thai exports to China, in particular, shrank 14.1% in September.

"The decline in September is unlikely to affect exports for the entire year," she said. "The Commerce Ministry is maintaining its export growth target of 8% this year, supported by the growing economy, diversity of export products, and higher competitiveness. In the final quarter, export volume should average $21 billion per month."

Visit Limlurcha, vice-chairman of the Thai National Shippers' Council, said 8% export growth is likely to be achieved, but next year's prospects are quite worrisome as external factors such as the foreign exchange rate may affect shipment competitiveness, along with the prolonged Sino-US trade row.

"What requires close monitoring is how fast Thai manufacturers can adjust to such external risks and whether Chinese and US investors will choose Thailand as their production base to avoid the impact of the trade row," he said.

"If they choose other Asean countries instead of Thailand, we will definitely see higher competition."

The Fiscal Policy Office (FPO) is maintaining its economic growth forecast at 4.5% this year, despite the exports decrease in September, said director-general Lavaron Sangsnit.

It was only a one-month decline and we should not rush to judgement, Mr Lavaron said.

However, the FPO is monitoring how long the trade war will last between the world's top two economies and how it will affect Thailand.

The impact from the decline in Chinese travellers to Thailand is also being closely watched by the Finance Ministry's think tank.

The FPO's economic growth projection for this year has been based on the assumption that the country's merchandise outbound shipments will expand at least 8%.

Mr Lavaron referred to the recent World Bank meeting that stated Southeast Asian countries would gain from tit-for-tat tariff measures as they prompt manufacturers in the US and China to relocate their production bases to guard against impacts.

Among Asean nations, Vietnam, Malaysia, Indonesia and Thailand can be new production bases, making it necessary for the country to prepare to draw foreign direct investment, he said.