Transplant a man with a plan
Business

Transplant a man with a plan

The Energy Ministry's Kulit Sombatsiri will be juggling many efforts, but transparency is a priority

Kulit Sombatsiri is the first permanent secretary in Energy Ministry history to announce his clear-cut work plans in the first week on the job. 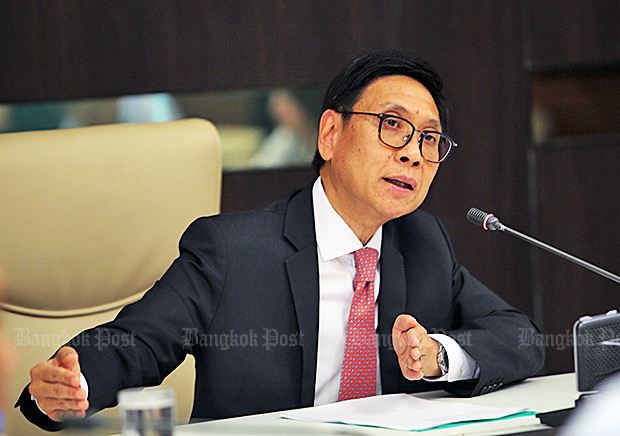 "I want to make it clearer and easier to understand so people can trace the progress of this ministry." -- Kulit Sombatsiri, Permanent secretary, Energy Ministry

His last position was director-general of the Customs Department in the Finance Ministry, a ministry he has worked for since 1998.

At 55, Mr Kulit is the Energy Ministry's eighth permanent secretary.

"I will look to revamp many projects in the Energy Ministry, with a focus on transparency in state budget disbursement," he said at his first press conference last week.

"I want to make it clearer and easier to understand so people can trace the progress of this ministry."

Q: What experience from the Finance Ministry can you apply to the Energy Ministry?

As former deputy director-general and adviser to the State Enterprise Policy Office (Sepo) in 2008, I am familiar with state enterprises and oversaw them in many related sectors such as infrastructure, energy, telecommunications and transport.

Those enterprises had a duty to privatise, such by as listing on the stock market, so I had to work closely with them as well as prepare new regulators after some enterprises were deregulated by the government.

Major regulators have been established under my watch, such as the Energy Regulatory Commission and the Office of National Broadcasting and Telecommunications Commissions.

When I worked at Sepo, I also sat on the board of PTT International Co, a wholly owned arm of PTT Plc, a national oil and gas conglomerate.

PTT International is in charge of the group's overseas trading.

Before taking the seats at Egat and Egco, I had learned about the impact of fuel tariffs on power bills.

In 2017, I also took a position as a board member in PTT Exploration and Production Plc, an upstream oil and gas drilling firm.

However, I resigned from all seats in the energy firms two month ago after I was relocated to the Energy Ministry's permanent secretary.

My previous job was similar to an investment banker for the state enterprises and covered the investment plan.

As a result, I had to work for good returns on investment, transparency, efficiency and an enforcement for relevant regulations.

But the energy sector requires technical knowledge in engineering fields.

I will execute the orders handed by policymakers in this ministry; however I need coordination and facilitation from relevant stakeholders to skip any barriers and move towards the better goals.

Q: What are your expectations for both short and long term?

My first job is to take action in line with government policy to discount three baht per litre for gasohol 95 for motorbike taxis and implementing welfare smart cards nationwide. These policies were initiated by Deputy Prime Minister Somkid Jatusripitak.

But I have only a month left to implement this policy, so I have to coordinate with several stakeholders to match connect welfare smart cardholders with actual motorbike taxis.

This needs coordination with many state agencies, motorbike taxis and encourage oil traders to join this campaign, which is scheduled to launch officially in December.

In the long term, I will conduct a study of the ministry's annual budget for fiscal 2020, which starts next September. The study will start this quarter.

I aim for every penny allocated into the ministry to follow the Thailand Integrated Energy Blueprint, including gas, oil, power development, energy efficiency and renewable energy development plans during 2018-36.

The public has to witness any achievements of energy schemes during 2019-23, so we will take care of each budget, from crucial to less important projects.

Moreover, all projects must be integrated towards a single objective.

I will over look the details of both fossil and renewable fuel projects and classify each fuel, all of which will be finalised within the next couple of months.

The poorest budget allocation is seen in the state-controlled Energy Conservation Fund, which has been notorious among the media and the public for the past 26 years.

The fund only disbursed 10% of the budget for fiscal 2018, which went to energy-saving activities

Established in 1992, the fund is being revamped.

Q: How will you choose between private and public participation in the energy sector during industrial deregulation?

I choose free competition for solar rooftops, where surplus power generation can be sold to state utilities. This is a top priority for me, and will be done very soon.

Policymakers are hurrying to finalise and implement this plan to be in line with disruptive technology in the energy sector.

But free competition must come with fair business conditions and clear regulation to prevent any conflicts in the future.

Q: How will Energy Ministry support decontrolling the gas business?

The policymakers are working hard to finalise clear-cut regulation and direction from many public hearings because this industry requires huge capital expenditures, but gas operators will see the new rules to be implemented in 2019.

Egat has been assigned as the front line to trade liquefied natural gas after PTT Plc.

Q: How will policymakers handle the rise of global oil prices?

Hopefully, the prices will stand at US$80 per barrel. If they climb up, we must deploy the State Oil Fund.

But we have other choices to promote biofuels as Thailand is a major producer. Using biofuels can suffering from increasing prices in the global market.

The ministry is testing more biodiesel content in a various of public transport such as truck fleets and trains.

Retail biodiesel is B7, with 7% methyl ester (ME) that is produced from crude palm oil blended with diesel.

The next stage will be the B10 and B20 because there is also a massive surplus of palm oil.

What is the ministry's policy to support electric vehicles (EVs)?

Q: On a global level, the Chinese government is very keen on both driving and making EVs, so China is becoming the largest EV market.

Thailand and China have a free-trade agreement with the rest of Southeast Asia that includes EVs, so Thai counterparts must study what measures will drive the population of EVs and bring the most benefit to the country.

But we are worried about waste management of battery EVs as this issue will become a huge problem in the near future, so the Thai government has to seek incentives to support the battery management business in many aspects, from reusing and restoration to termination.

The Energy Ministry will support private operators to participate in the EV scheme, while policymakers are gradually decontrolling the market by terminating every barrier that would deter private participation.

In the future, we will be able to trade electricity with each other through a mobile application, so the ministry must study handle the fast approach of big data and blockchain.

Q: The country's gas resources will be depleted in the next decade, how will the ministry handle this?

Thailand's petroleum and petrochemical sectors have been successful in the global market after the country explored natural gas in the Gulf of Thailand, and the sectors are in the third generation of industry.

But we are working with several stakeholders to study shifting from commodity-grade polymers to higher value-added products, including engineering plastic.

We are also seeking to shift from gas-based raw materials to crude oil.

This plan will be done alongside renewable energy development in the future.