The unhappy travellers file complaints with tourist police at Don Mueang airport shortly after arriving back in Thailand from Japan, having been abandoned by their tour operator at Narita airport on the first day of their holiday. (Photo by the Tourist Police Bureau)

A tour operator has been arrested on fraud charges after 55 holidaymakers travelling on tour packages were abandoned on the first day, on arrival at Narita airport.

The stranded travellers filed a complaint with tourist police at Don Mueang airport after finally arriving back to Thailand on Tuesday night.

Thai media reported that a private company had bought tour packages costing 28,000 a head from the  firm for its VIP customers to go Japan from Oct 19-23 - a total of 1.54 million baht.

Accommodation and entry to a MotoGP racing event and a visit to Mount Fuji were included in the packages.

Instead, their Thai tour guide abandoned the 55 holidaymakers shortly after arriving at Narita airport from Bangkok on Oct 19. 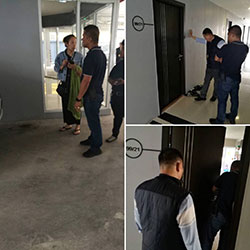 Tourist police arrest tour operator Natthakarn Dokpikul at her apartment room after a group who bought  tour packages from her firm were left stranded at Narita airport in Japan. (Photo by the Tourist Police Bureau)

No tour had been arranged for them.

After waiting for more than 10 hours and still being unable to raise the guide or any other staff from the firm, the group decided to stay in Tokyo.

Krirkkiart Traibanyatkul, owner of Honda Bigwing Center’s Nakhon Ratchasima branch, took care of accommodation and other expenses for all of them. They flew back to Thailand on Tuesday night after buying new tickets at a total cost of 740,000 baht.

On arrival at Don Mueang airport, the disgruntled travellers immediately filed a complaint with tourist police.

Pol Maj Gen Terapon said intending travellers should check that tour agents have operating licences before buying tour packages. This could be done via the Department of Tourism’s website, or TPB hotline 1155.

Holidaymakers should be especially careful about purchasing cheap tour packages.