Female motortaxi drivers on the rise in Bangkok
Thailand
General

Female motortaxi drivers on the rise in Bangkok

Decent wages and a sense of autonomy are attracting more and more women to work as motortaxi drivers. (AFP photo)

Hair pulled back tightly as she lounges on her red scooter, Ar is a rare sight among the male-dominated ranks of Bangkok's "Win" motortaxi riders plying their trade on the capital's treacherous roads.

A veteran of seven years who works in the bustling On Nut district, Ar is among the thousands of women drawn to the work as gender roles in Thailand evolve, attracted by the flexible hours, decent wages, and a sense of autonomy.

She welcomes the changes as offering a chance for women to gain more independence.

"I am glad there are more opportunities for women to become motorsai," she said, referring to the road warriors whose distinctive orange jackets line the streets of Bangkok.

"A new generation of women now have to be tough and brave."

Although no official figures are available, observers say more women are choosing to brave the risky traffic-logged roads and discrimination for the flexible work schedule, which allows them ownership over their lives.

Chaloem Changtongmadun, president of the Motorcycle Taxi Association, said that working as a motorsai offered women a level of freedom not available in offices, shops or factories.

"Women don't find the work convenient when they become pregnant, take maternity leave or visit their hometown," he told AFP.

"They feel a closer connection with their families than when they worked in companies."

He believes that women today make up roughly 30% of Bangkok's 98,000 registered drivers although others say the numbers are probably lower.

In many parts of the workforce gender expectations are still at play, with women typically filling service industry jobs and clerical positions.

"Thailand still has very blatant gender discrimination," said Kyoko Kusakabe, a professor at the Asian Institute of Technology where she studies women's employment in the informal economy.

That is in spite of women shouldering many of the family responsibilities, especially in times of crisis, Ms Kusakabe said.

Women are more likely to take up low-paid work in the informal economy while men "stay unemployed to look for a better job", she explained. 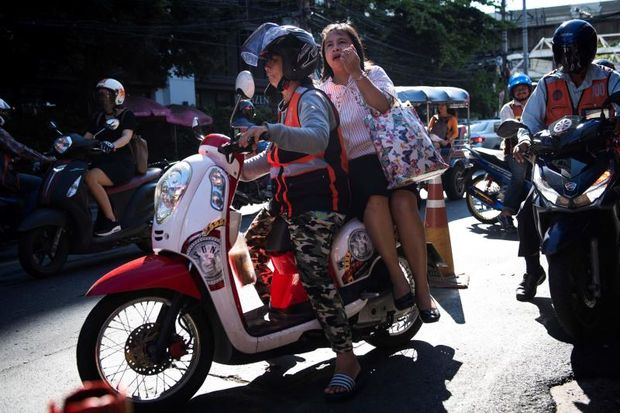 A female motorcycle-taxi driver, locally known as 'motorsai', rides with a passenger in Bangkok on Sept 21, 2018. (AFP)

Mr Chaloem also attributes the increase in recent years to the struggling economy, which has been under pressure since a military junta took over in 2014.

Thailand's ever-shifting political landscape -- where courts and coups have undercut civilian rule since 2006 -- has hampered growth in what has been dubbed a "lost decade".

"Many people lost their jobs or couldn't make enough money to take care of themselves and their family," Mr Chaloem told AFP.

Thailand also has one of the highest numbers of road deaths in the world, and Bangkok's motortaxi drivers embrace a life on the edge to provide a transport lifeline, weaving skillfully between long lines of cars.

As the industry has become more regulated, the drivers are now less vulnerable to abuse from shadowy mafias demanding monthly payments.

Mototaxi queues -- known as win -- also function in a more democratic fashion, like holding elections of leaders and allowing members of a queue to vote on certain decisions.

However, most of the women still require the support of a male relative in order to join a line, where there is usually a lot of competition.

Waiting for her turn on a shady Bangkok street in the Ari neighbourhood, Ms Paveena -- who goes by the nickname Yaya -- says she could only secure her position because her brother vouched for her.

"My brother asked the win owner if I could borrow one of their (orange vests) so I could make more money," 36-year-old Yaya told AFP, explaining the second job was needed to support her family after the death of her mother four years ago.

Today, she earns about 1,200 baht for a full day's work -- a relatively high income compared to the daily minimum wage of 330 baht.

Being able to make her own schedule also gave her the freedom to juggle her other job of selling school stationery.

Ms Yaya said leaving a life of routine to buzz through the streets even helped her deal with her grief.

"Driving helped me get through the loss of my mother because I didn't have to think so much... I just drove," Ms Yaya said.

Buayloy Suphasorn, 53, started 17 years ago and is considered a pioneer as one of the first female drivers on her win.

"Some men didn't want to sit on my bike because I'm a woman," she recalled, adding that they thought she would be a bad driver.

"But now things have changed."