Prime Minister Prayut Chan-o-cha has ordered the National Economic and Social Development Board (NESDB) and Office of the National Security Council (NSC) to look into a proposed canal project connecting the Gulf of Thailand to the Andaman Sea.

It would run from Krabi in the Andaman to Trang and stretch further to Nakhon Si Thammarat and Songkhla, next to the Gulf of Thailand. 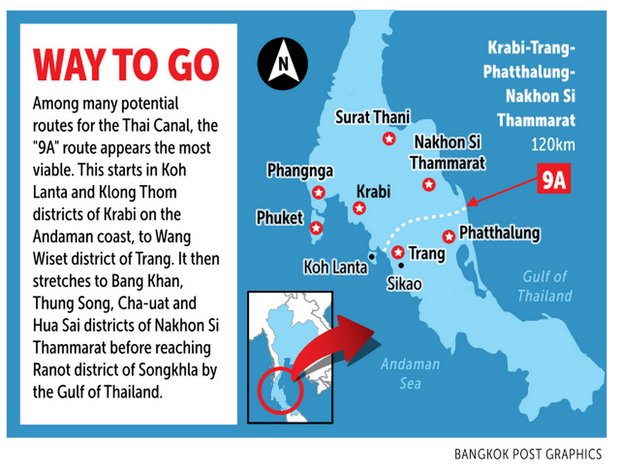 The 120-kilometre canal and the specific 9A route are being pushed by the Thai Canal Association (TCA), a group composed of supporters, local businessmen, industrialists and retired officials.

TCA coordinator Narong Khumthong said the group has conducted a survey of residents living in those areas that would be affected by the project and submitted their feedback to the prime minister, the 4th Army Region, the Ministry of Transport and the NESDB.

This was aimed at prodding the government into setting up a committee to conduct a proper feasibility study, Mr Narong said.

Former 2nd Army Region commander Thawatchai Samutsakorn, also vice president of the TCA, said the committee must be formed before the military leadership steps down, as it would be unlikely to happen after the election scheduled for February.

"After the poll, when we have [active] opposition parties [again], they would oppose the campaign without taking into account the potential benefits to the country and the public," Gen Thawatchai said.

He said it would complement the Eastern Economic Corridor (EEC) project now being driven by the Prayut administration.

"If we dig the canal, we would become the leader of Asean," Gen Thawatchai said.

The "9A" canal is one of the proposed routes for the Kra Canal project, an ambitious plan to cut the canal across the southern peninsula and create a vital shipping route in the region.

The idea has been under discussion at various times over the past few centuries. 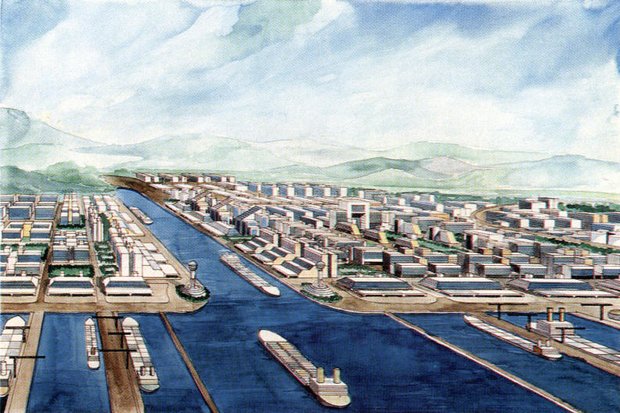 New promoters of the nation's oldest unachieved civil works project believe the Kra Peninsula Canal - to be called by a new name, Thai Canal - would bring wealth to the country, as well as to the promoters. (Artist's rendition)

The government of former prime minister Thaksin Shinawatra approved setting up such a committee to conduct the feasibility study, but the work was discontinued after his administration was overthrown in a military coup in 2006.

According to Gen Thawatchai, a group of Chinese investors have reached a deal with the TCA to support the project.

He said the TCA has regularly visited local communities and organised seminars to raise awareness and boost understanding of the plan.

"I can say that [local] people have thrown support behind the 'Thai Canal' project," said Gen Thawatchai, adding that most people in the southern region have endorsed it.

Deputy Prime Minister Somkid Jatusripitak, who is in charge of economic affairs, has also championed the scheme but believes now is not the right time for it, Gen Thawatchai said, adding it would not incite separatism.

"If the villagers have [more] money, they certainly wouldn't consider joining an insurgency," he said.

"We've got enough troops to handle security so there's nothing to fear."

"We have to think of something new for the coming generations," he said.

China, Germany and Japan are among countries that are ready to invest in the 2-trillion-baht project, he said.

Construction could take five or six years, he added.