The new strategies include adding more flights to destinations in Japan, a joint promotion with a Chinese airline, and airing popular TV soap operas in real-time on flights to attract users. 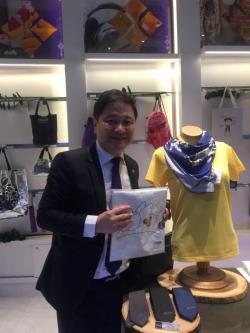 Mr Wiwat shows off products displayed at the THAI Shop at the airline's headquarters on Vibhavadi Rangsit Road. SUCHAT SRITAMA

Wiwat Piyawiroj, executive vice-president of commercial business, said THAI is working on a variety of strategies with different partners to increase revenue from aviation and non-aviation sources.

THAI plans to increase the frequency of the Bangkok-Sapporo route from 7-10 flights per week, starting from Dec 1.

THAI and the Japan National Tourism Organisation have scheduled a travel fair called Fit Japan at Siam Paragon from Nov 2-4. The event is aimed at encouraging Thais, particularly free independent travellers, to visit Sapporo and other destinations in Hokkaido during the high season.

Mr Wiwat said THAI and China Southern Airlines are also working on a joint promotion to bring back Chinese passengers to Thailand, especially the final two months this year. He did not elaborate what kind of promotions would be offered.

Chinese tourists travelling with THAI have been declining since July's boat tragedy in Phuket, and the number of arrivals plunged more than 10% in all markets, impacting second-tier provinces the most, said Mr Wiwat.

To stimulate visits to these small towns, he said THAI would be joining forces with the Tourism Authority of Thailand (TAT) to create 10 tourism routes, mainly to secondary provinces, promoting them to targeted markets.

"The airline and TAT are also eyeing potential markets in Japan, China, South Korea and India for the new campaigns," said Mr Wiwat.

For the domestic market, THAI is set to open THAI Shop in Takashimaya, the famous Japanese retail chain that is scheduled to open next month at Iconsiam.

THAI Shop at Takashimaya will be THAI's first outlet targeted to cash in on revenue from international tourists. The airline has just completed and expanded its existing shops.

THAI plans to launch soon a new mobile application that is expected to help boost online purchases of not only tickets but also products at THAI Shops.

"With many strategies set for the remainder of this year, we are confident the average cabin factor will be higher than 80%," Mr Wiwat said.

He said the airline is also planning to screen TV series in real-time, featuring popular Thai soap operas. The airline will soon invite the public to submit their favourite TV series to be added to on-board services.

THAI's operation results posted a loss of over 2 billion baht last year and its management team, led by president Sumeth Damrongchaitham, have the rest of the year to propose strategic plans to the government, particularly for the procurement of new aircraft.