4 EEC projects worth B470bn get nod

Upper North to get development boost

Huge new investment is confirmed for the EEC in an aviation city and maintenance, plus new upgrades to both Laem Chabang and Map Ta Phut seaports by 2025. (File photo)

The projects were approved by the EEC Policy Committee on Oct 4 and endorsed at a mobile cabinet meeting on Tuesday in the northern province.

The approval came as some of the nation's economic engines including exports, tourism and industrial production, have shown signs of a slowdown.

The number of foreign tourists is expected to drop by 1.5 million this year from an earlier estimate of 39.5 million after Chinese arrivals dropped for a third straight month in September, according to the Fiscal Policy Office.

The projects are all public-private investments. Terms of reference (ToRs) are scheduled to be launched soon and partners will be confirmed by February, the government said at the cabinet meeting.

The aviation city project will be completed in five years, in line with plans to build a high-speed railway linking three airports, including Suvarnabhumi.

The investment includes a third terminal, a commercial gateway, the second phase of an MRO, a cargo village or free trade zone, and a human resource training centre.

The 6,500-rai aviation city will be able to accommodate 60 million passengers annually, putting it on par with Suvarnabhumi. It is expected to yield economic returns worth 189 billion baht.

He said the four projects are expected to contribute 820 billion baht in benefits to the Thai economy, excluding the impact of 40,000 new jobs and a financial rate of return to the government projected at a combined 559.71 billion baht. 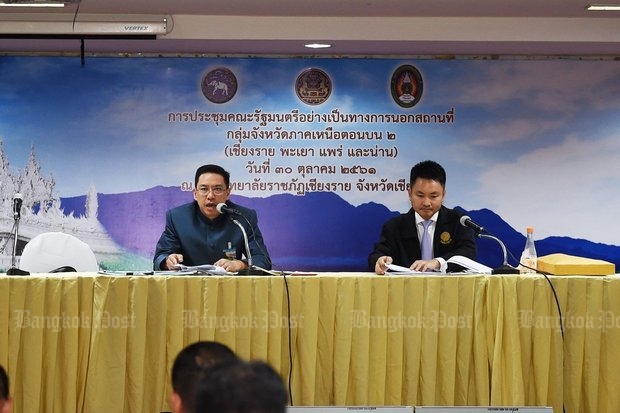 Government spokesman Buddhipongse Punnakanta (left) made the announcement of approvals for new EEC projects at Chiang Rai, where the cabinet is holding another non-political mobile meeting. (Post Today photo)

The meeting was attended by the four provincial governors and representatives of the private and civic sectors.

The meeting discussed measures to boost tourism, trade and investment, infrastructure investment, agriculture, quality of life, and natural resources and the environment in the four northern provinces.

Gen Prayut said the North has the potential for considerable tourism development. He said the government has come up with a strategy to upgrade travel-related services and promote cultural and health-related tourism.

The plan aims to better connect Thailand with neighbouring countries in Asean, the Greater Mekong Subregion, and members of the Bay of Bengal Initiative for the Multi-Sectoral Technical and Economic Cooperation (Bimstec).

The cabinet also approved a proposal by the private sector to promote Tham Luang cave in Mae Sai district of Chiang Rai as a top-tier tourist attraction following the rescue of 13 members of a local football team, the Wild Boars, from June 23 to July 10.

Other approved proposals include further development of Kwan Phayao, the largest freshwater lake in the northern region, and an upgrading of Phayao sports stadium.

Gen Prayut said the government will promote organic farming using insecticides made from natural plants rather than chemicals, and increase areas for organic farming.

The regime also plans to develop the four northern provinces into smart cities for elderly people. Emergency medical services will be provided for those who have accidents, among other planned services, Gen Prayut said.

Addressing the preservation of natural resources and the environment in the upper North, Gen Prayut stressed the need for sustainable and efficient management of water resources.

He described the region as being rich in such resources.