The digital disruption is just getting started, according to executives of top tech and finance companies at the Forbes Global CEO Conference in Bangkok. 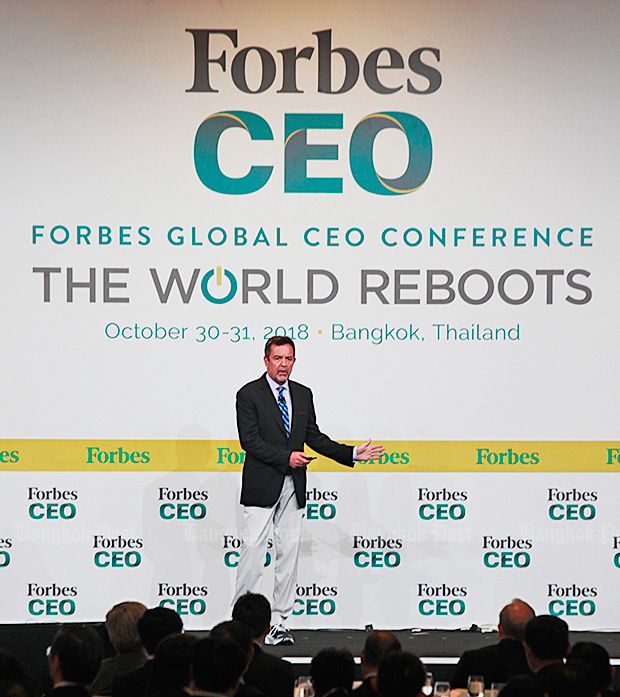 The conference is focused on how leaders, companies and countries are confronting challenges and seizing opportunities arising from disruption.

In a panel discussion, JP Gan, managing partner of Qiming Venture Partners; Kuok Meng Ru, chief executive of BandLab Technologies; Noni Purnomo, president of Blue Bird Group Holding; and Tan Min-Liang, head of Razer, gave insights on the future of disruptive technologies in their respective industries such as artificial intelligence (AI), the Internet of Things (IoT) and software as a service.

Mr Gan sees disruptions in all industries from healthcare to law enforcement to coffee. He is invested in a coffee company working on drone technology that would allow customers to order a coffee in the morning to be dropped off on their balcony by a drone. 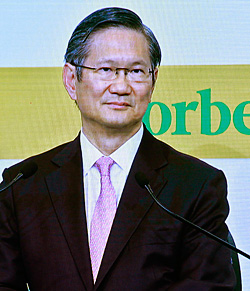 "The key to machine learning and AI is having a lot of data," he said. "AI companies in China have a competitive advantage against companies around the world because the government allows them to collect this data.

"Unicorns today are growing like rabbits," said Mr Gan, referring to private companies valued at over US$1 billion.

Mr Min-Liang, who owns one of the largest gaming companies in the world, specialises in hardware like gaming PCs, software and services to connect gamers.

"When I started the company people said I was getting into a niche market," he said. "Now gaming has grown into a $130-billion market, bigger than music. Razer didn't disrupt anything, rather it served and grew an untapped market."

But that doesn't mean Razer is not vulnerable to disruption. Cloud computing, which could stream video games over the internet, could reduce the need for expensive hardware. 5G adoption will only exacerbate this trend.

"Most of these trends you can spot ahead of time, and we have a group of people working on spotting disruptions," Mr Min-Liang said. "We need to spot the trends, make sure we have new generations looking, and make sure new trends like 5G are addressed."

The smartphone is the first instrument many people pick up today, with the technology to make your own music, Mr Kuok said.

"We want to combine the markets of music consumption and music-making," he said. Mr Kuok created a cloud platform where music listeners and music makers can collaborate and make music together over the internet. 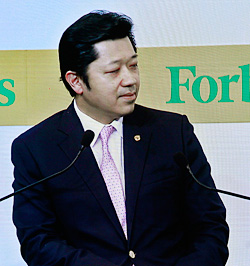 He said AI can be a huge disrupter for the music industry. Although it is still in its infant stage, AI-created music can be used as cheap background music for internet videos and TV shows, where licensing can be expensive. This trend could happen sooner than expected, Mr Kuok said.

Noni Purnomo, president-director of Blue Bird Group Holding, is a victim of disruption. Her traditional taxi company in Indonesia has been around since 1965 but is struggling to keep up with industry disrupters like Go-Jek and Grab.

"We were highly regulated, then this new business model came and hit us hard," she said. "What we realised is what is important to any business is to address the changing needs of the customer."

Blue Bird was the first taxi company in the world to create its own mobile app for hailing cabs, but that did not prevent it from being disrupted by ride-sharing apps, which did not follow government regulations, Ms Purnomo said.

She said Blue Bird is looking into autonomous vehicles as the trend of the future, but it's hesitant to lay off its 45,000 drivers.

"Autonomous vehicles and the analytics behind them would be very helpful for us to run our company, but until Indonesia is ready for the technology, we will continue to use drivers," Ms Purnomo said. "The cost of drivers is much cheaper than technology for us, so AI driving will probably be adopted first in countries where human labour is more expensive."

The relationship between banks and customers is the most important factor as banks attempt to gain better insight into customer demands, he said. Banks are paying more attention to building innovation as a mindset, strengthening internal working processes and cultures between bank and other digital partners, Mr Chartsiri said. 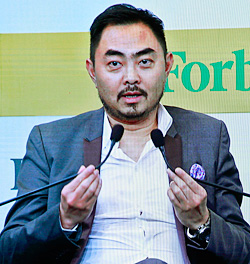 Business leaders must be adaptive now more than ever, said Suphachai Chearavanont, chief executive of Charoen Pokphand Group and chairman of the executive committee of True Corporation.

"Vision needs to be reshaped through organisational collaboration," he said. "The most intelligent person shouldn't always be at the top of the hierarchy. They should be at the front end, so we need to rethink on how to train, empower and incentivise them."

"Leaders also need to continuously spot and create the island, and let the old islands that do not want to change drown.

"Finding the right talent and knowing what to expect from them is also crucial. It's not only about our people. It's about knowing how we should change to suit the company culture. If we do not change, it will not change anything."

Mr Suphachai said leaders should shift from giving orders to asking the right questions to ensure that organisational values and cultures are aligned in operations. They must also realise change moves at an exponential rate, so they need to ensure the organisation is equipped with the right technology to thrive.