The Razer 2 game smartphone was launched in Thailand, its first overseas market.

The explosion of gaming activities, with over 18.9 million gamers in Thailand, is driving the debut of new gaming smartphones.

Razer, the US-based gaming accessories maker, is joining with Advanced Info Service Plc (AIS) to introduce the Razer 2 game smartphone in Thailand, its first overseas market outside the US, aiming to capitalise on the high-growth opportunity. 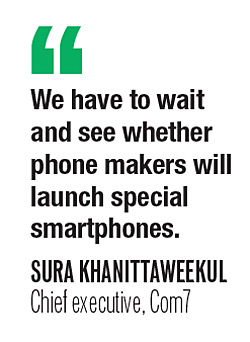 There are an estimated 18.9 million gamers in Thailand, accounting for 28% of the population, while there are 30 million people projected to be in the e-sports community here.

Games require low-latency networks for quality play. As of the third quarter of 2018, the use of mobile internet was up 71% year-on-year.

To capitalise on the growing market, AIS and Razer introduced the Razer 2 smartphone for gaming as a Thailand exclusive.

"Thailand has 25 million millennial users, aged 18-35, and they are the target group of AIS," Mr Pratthana said.

Irene Ng, vice-president for Asia-Pacific mobile at Razer, said Thailand is the first country in Southeast Asia to introduce the Razer 2 smartphone after its launch in the US.

Sura Khanittaweekul, chief executive of retail operator Com7 Plc, said gaming smartphones are still a niche and a marketing gimmick. "We have to wait and see whether phone makers will launch special smartphones," he said. "If you call it a phone designed for gamers, lifestyle users might not purchase it."

The Huawei Mate 20 X was designed to support game players, he said, and the entry-level Y9 phone is for young gamers.

Juthamas Tangtatpongsathorn, an analyst at IDC Thailand, said the best phones for gaming tend to fall in the premium or flagship range and come with top-tier specifications, sharper displays and longer battery life -- all to ensure gaming enthusiasts an optimal experience.

For the average user that plays games casually, a regular mid-range phone is sufficient to run mobile games.

The most distinct difference for a gaming phone is typically the exterior design, which looks "cooler" and more futuristic to appeal to the niche segment.

Some end-users, especially those in a more professional or business setting, may not find the design suitable, opting instead for a traditional flagship model.

Various gaming phones also come with customised accessories that can be attached to the phone for an optimised gaming experience.

"So we believe that gaming phones are meant to target a niche segment -- specifically, gaming enthusiasts," Ms Juthamas said.

A controversial second-half penalty ended Thailand's fantastic run in the AFC U23 Championship and shattered their dream of a place in the 2020 Olympics as Saudi Arabia chalked out a 1-0 win over the hosts on Saturday night for a place in semi-finals.

Britain's Prince Harry and his wife Meghan have agreed to give up their royal titles and stop receiving public funds as part of a settlement with the Queen.