Travellers wait for their bags at Suvarnabhumi airport. The cabinet on Tuesday approved even more measures to try to attract foreign visitors before the end of the year. (File photo)

The measures include double-entry visas for six months and special discounts at Thai malls under the "Amazing Thailand Grand Sale: Passport Privileges" campaign, running from Nov 15 to Jan 15, 2019.

The measures aim to help the government meet its goals of 38 million foreign visitors and 2 trillion baht in foreign tourism revenue this year.

"The Tourism Authority of Thailand (TAT) reported that Chinese visitors to Thailand shrank by 11.4% in July and August, then fell by 14.4% and 19.1% in September and October, respectively," said Nathporn Chatusripitak, an adviser to the Prime Minister's Office Minister. "They travelled to other places instead, such as Vietnam, Malaysia, South Korea and Hong Kong. The additional measures are hoped to attract those travellers back to Thailand."

Mr Nathporn said that for the shopping mall campaign, the government will ask for cooperation from department stores, brand owners, producers, and credit card companies to help offer special discounts to foreign tourists on top of the normal discounts they already offered on items that are popular among foreign tourists such as apparel, cosmetics and electric appliances.

During the campaign, the TAT and the Finance Ministry have been assigned to open special areas at tourism spots and department stores to provide tax refund services to foreign tourists.

More importantly, he said, the majority of foreign free independent travellers have been found to favour travelling not just to Thailand's major tourism spots, but also those in neighbouring countries such as Laos, Cambodia and Malaysia.

Offering the re-entry permit after a single-entry visa is granted by Thailand will make travel more convenient, he said.

Last Tuesday, the cabinet gave the green light to waive the 2,000-baht visa-on-arrival fee for visitors from 21 nations for two months to give tourism a much-needed boost.

The Royal Gazette announced Tuesday that the visa fee exemption will be effective from Nov 15 to Jan 13, 2019.

Below: A board advertising the Amazing Thailand Grand Sale on the skywalk at Ratchaprasong intersection. The TAT is working to recapture lost Chinese tourists. (Photo by Wisit Thamngern) 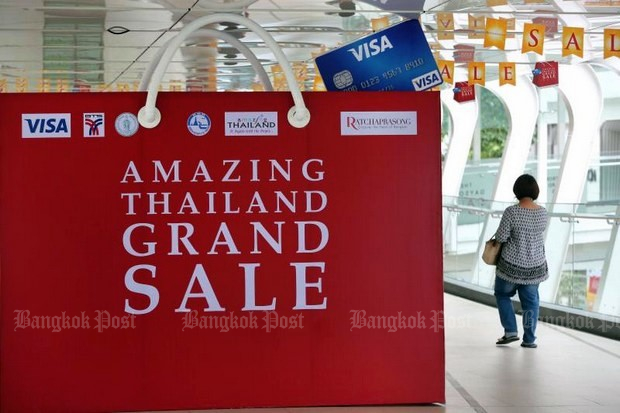