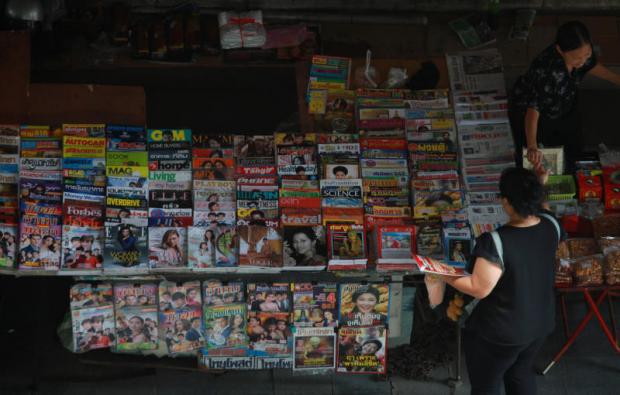 Magazines and newspapers are for sale at a stall on Phloenchit Road. Print ad buys will be increasingly bundled with online spending. SOMCHAI POOMLARD

MI media director Pawat Ruangdejworachai said overall ad industry spending next year is projected to grow by 5-10%, with the three main media platforms being TV (50.2 billion baht), online (14.9 billion) and OOH (11.7 billion). Ad spending on TV keeps declining and no TV stations have increased airtime prices, even though the viewership ratings of some channels (including Workpoint, Mono and One) have improved.

By next year, there will be more promotions for TV ad spending that will induce more purchases by advertisers, Mr Pawat said.

OOH is forecast to have the highest growth this year at 23%, followed by 21% for online media. OOH ad spending is growing because it has clear impact, repeated ads and can target specific groups.

"The proportion of OOH ad spending last year was only 6% of total media spending, but that is forecast to double this year," Mr Pawat said.

OOH is purchased not only for Bangkok audiences, but for other cities such as Chiang Mai, Phuket and Khon Kaen, albeit not with the same impact as in Bangkok, he said.

"We saw many brands preparing to raise OOH prices next year, at an average of 15%," Mr Pawat said. The price of ad screens will soon surpass ad billboards, he said.

Ads purchased for newspapers or magazines will not go strictly to print advertising, but they will also be bundled with online.

"Almost 100% of ad spending will go to those three media, with only automobile advertising, especially for pickups, going to newspapers," Mr Pawat said.

"It's hard to predict whether the ad spending next year will increase much with the national election because the government's policy is not clear yet," Mr Pawat said. "But I expect political parties to spend less on newspapers and do more online. It's unknown yet how much political parties will be allowed to advertise."

The target groups for the upcoming election are new voters, university students and first-jobbers, making social media a significant tool for the parties and content a priority.

"The parties must transform their policy into strategy with language suited to new voters," Mr Pawat said.

In the 2011 election, parties spent 300 million baht on media advertising, with half of that in newspapers, but next year is a different story, he said.

Ad spending online will keep growing for an additional three years, increasing at a double-digit rate next year if certain factors pan out, Mr Pawat said.

"Predicting the next three years for OOH media is difficult, but it should keep growing next year, with more innovation in the sector," he said. 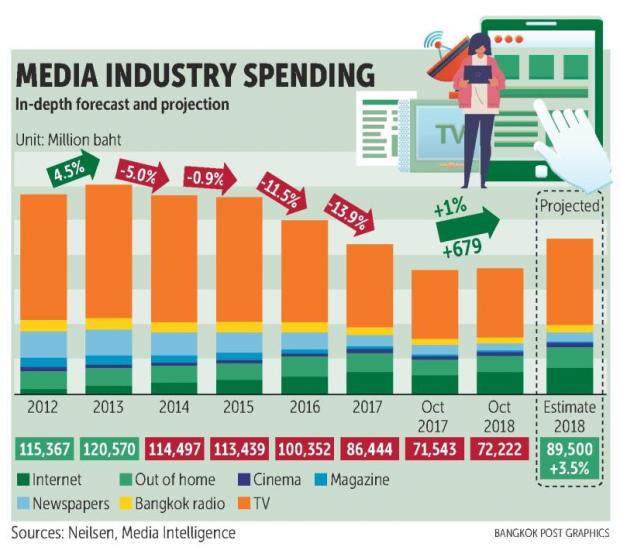