Economic growth of 4% is achievable if exports, the lifeblood of producers, expands more than 7% from November to December, says Deputy Prime Minister Somkid Jatusripitak.

To reach annual growth of 4%, the fourth-quarter figure must not slip below 3.5%, Mr Somkid said.

But Mathee Supapongse, a deputy governor of the Bank of Thailand, said a marginal downgrade of the central bank's economic growth forecast of 4.4% for this year at the next meeting is likely after growth stalled in the third quarter.

Economic growth surprised by slowing to 3.3% in the third quarter, easing from 4.6% in the second quarter and a revised 4.9% in the first quarter, the highest in five years. For the first nine months, the economy grew by 4.3% on the same period last year.

The weak economic growth reading for the three months to September could be attributed to September's disappointing exports and a sharp decline in Chinese arrivals. 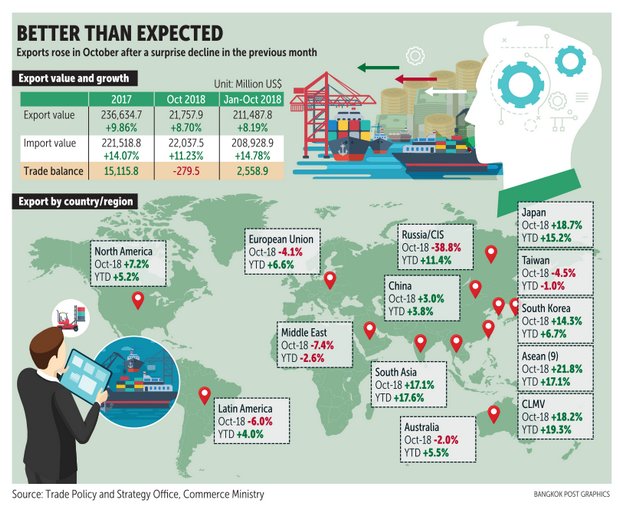 Amid the murky economic prospects, the government is launching a raft of packages to boost domestic demand in the final two months.

Mr Mathee said Thailand's major export destinations, particularly Japan and China, remained solid in October, with growth of above 10% and 3-4% respectively, and this indicated that China's demand for electronics and computer parts remained solid.

Thailand's customs-cleared outbound shipments rebounded to growth of 8.7% in October from a year earlier, compared with a contraction of 5.2% in the previous month.

Mr Mathee said 4% growth would be no cause for worry, as monetary policy would not be pressured.

The next Monetary Policy Committee (MPC) meeting is on Dec 19, and several economists expect to see the first rate hike in more than seven years after a 4-3 vote to maintain the policy rate at November's meeting.

The country's export growth continues to have momentum and October's strong export reading is in line with the central bank's expectations, he said.

He warned that the trade spat between the US and China would not end soon and would have an impact on the Thai economy going forward.

Chinese tourists are another factor that warrants monitoring, but Mr Mathee said mainland arrivals should be restored by the government's serious efforts to regain their confidence.

A spate of incidents, including the capsizing of the Phoenix off the coast of Phuket on July 5 that killed 47 Chinese passengers, and a video of a Chinese tourist quarrelling with a security guard at Don Mueang airport in September, triggered the drop in Chinese tourists to Thailand.

In another development, Mr Mathee said that the baht, which has moved in tight range so far this year, is not a threat to exports.

Offshore fund flows to Thailand are balanced between inflows and outflows, he said, adding that foreign investors are unloading equity but snapping up long-term bonds.

Prime Minister's Office Minister Kobsak Pootrakool said the government is hopeful that year-end stimulus measures will drive the country's economic growth to more than 4% this year.

Mr Kobsak said myriad measures to stimulate tourism, boost low-income spending and lure private investment have been introduced by the government, while a series of year-end shopping tax breaks are about to be issued.

He said the tourism sector is also expected to recover in December after the government approved visa incentives for foreign tourists.