A prized tax deduction is set to expire, but a proposed substitute could diminish the impact

A man browses investment and savings plans provided at SET in the City 2018. (Photos by Somchai Poomlard)

Paying tax is a bitter pill to swallow for most people, with many Thais opting to invest in long-term equity funds (LTFs) for the tax deduction on annual income.

But such tax privileges will soon disappear because financial regulators no longer want to spoil the upper and middle classes with a generous treat and risk losing too much revenue in the years to come.

Apart from the thorny tax issue, one of the biggest concerns is how Thailand's stock market is at risk of substantial capital outflows as a result of failure to extend the LTF tax privilege.

The Federation of Thai Capital Market Organizations (Fetco) has proposed to Deputy Prime Minister Somkid Jatusripitak the idea of a new investment fund as a substitute for LTF investment, with a 10-year investment period and a tax credit of up to 100,000 baht.

If a taxpayer wants to increase his or her tax deduction privilege, an additional investment must be made in the fund.

The condition for the fund is that fund assets have to invest 50% in infrastructure funds and stocks associated with the Thailand Sustainability Investment list of the Stock Exchange of Thailand (SET), with the rest depending on the fund manager's consideration.

The move is aimed at encouraging greater long-term savings among Thais and reducing healthcare spending using the government budget in the future.

"Considering the LTF itself was a byproduct of the 1997 financial crisis, we believe that instead of abolishing LTFs outright, a better solution would be to refresh the objectives of the programme so that it becomes more aligned with the country's strategic goals over the next decade," Tisco Securities said.

"The core theme should shift from promoting the equity market to improving savings among the mid- to lower-middle-income group. This is of utmost importance considering that the average household savings rate is currently less than 10% on average after debt servicing."

LTFs were established in 2004 to promote long-term savings by allowing investors to deduct up to 15% of their total annual income or a maximum of 500,000 baht a year. Capital gains from the redemption of units are exempt from tax. 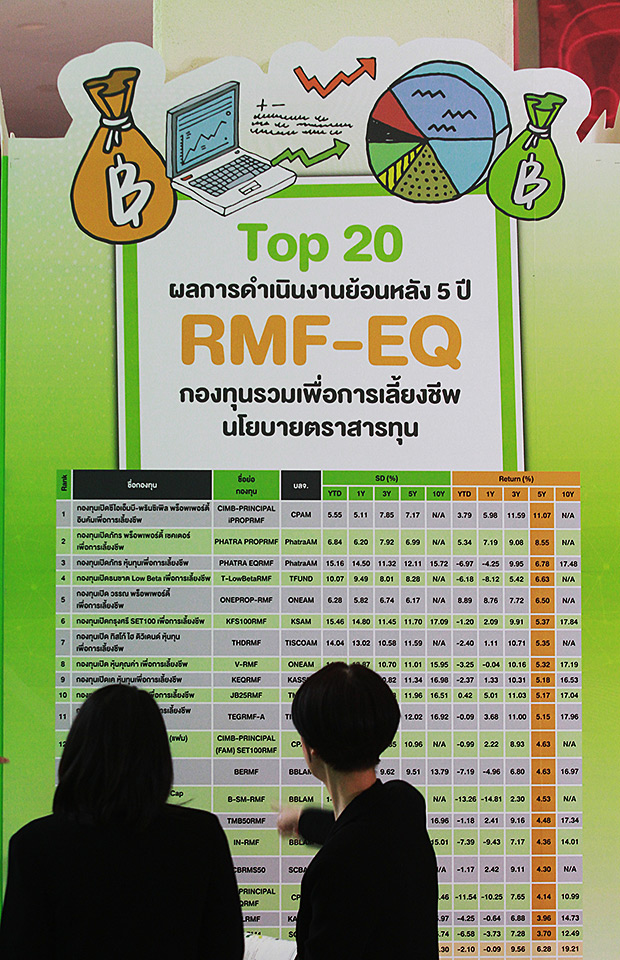 A board shows the performances of RMFs at the SET in the City exhibition. SOMCHAI POOMLARD

To obtain the tax deduction, individuals must hold LTF units for at least seven calendar years, up from the previous five years, and cannot be incapacitated or dead.

Simply put, this means that the higher your tax bracket, the more tax you can deduct.

In June, the Association of Investment Management Companies (AIMC) reported that there were just under 1.2 million LTF accounts, though many are held by the same individuals.

It appears that the original objective of LTFs has been fulfilled, as assets under management by local funds have exceeded 8% of total market capitalisation of the SET in 2018. 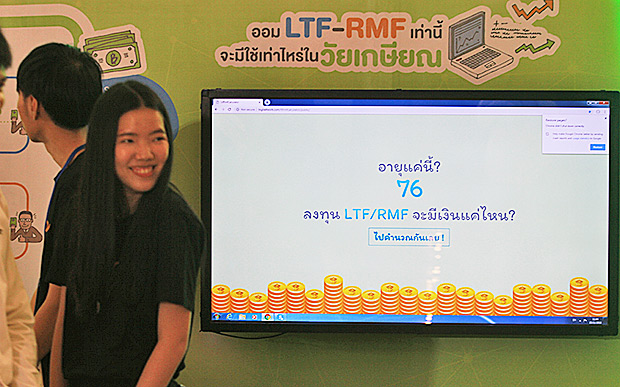 LTF and RMF products are promoted at the SET in the City exhibition.

In the worst-case scenario, whereby LTFs expire after 2019 without a substitute, the Thai equity market would be deprived of 18.8 billion baht in net inflows per year from LTF contributions based on estimated inflows in 2016-17, according to Tisco Securities.

The stock market is poised to incur an annual average loss of 60 billion baht if the tax deduction for LTFs is not renewed or a replacement tax-deductible fund is not established, Kasikorn Securities (KS) said.

The loss would dampen investment in the SET index, with severe damage if no new tax-deductible product is offered, said KS vice-president Prakit Siriwattanaket.

Voravan Tarapoom, chairwoman of the executive board at BBL Asset Management, said ending the tax deduction for LTFs would hurt Thailand's stock market because 100 billion baht worth of Thai mutual funds are scheduled to be redeemed in 2020, with an additional 100 billion baht in 2021.

Investment flows from LTFs can help mitigate possible capital outflows from the Thai bourse once the bull run comes to an end, Mrs Voravan said.

The Finance Ministry will not extend the LTF tax privilege when it expires next year, said Prasong Poontaneat, the finance permanent secretary.

Regarding concerns over whether there will be capital outflows if the LTF tax privilege is scrapped, he said investment flows could move into other investment funds and not into bank savings deposits.

"LTF is only a part of the Stock Exchange of Thailand," Mr Prasong said. "Recent effects happening to the bourse are derived from external factors rather than an LTF issue."

Fiscal Policy Office director Lawan Saengsanit said there is no basis in truth that news of terminating the LTF tax privilege is affecting stock market sentiment. He said investors can still use their investments in LTFs for the tax deduction until year-end 2019.

The Finance Ministry intended to apply the tax privilege for LTF investment as a short-term measure and believes that the policy should end because the stock market has become more developed and stabilised, Mr Lawan said.

Despite the imminent demise of the LTF tax privilege, investors can invest in retirement mutual funds (RMFs) to generate actual long-term savings, he said.

According to a study conducted by Athiphat Muthitacharoen, a lecturer in Chulalongkorn University's economics department, the government lost 11 billion baht in revenue last year, or 0.7% of the country's economic value, on tax deductions, with deductions on savings and investment comprising 45% of the total, or 50 billion baht.

Fetco members include several major organisations, Mr Vasin said, including the Stock Exchange of Thailand, the Thai Bond Market Association, the Association of Thai Securities Companies and the AIMC. 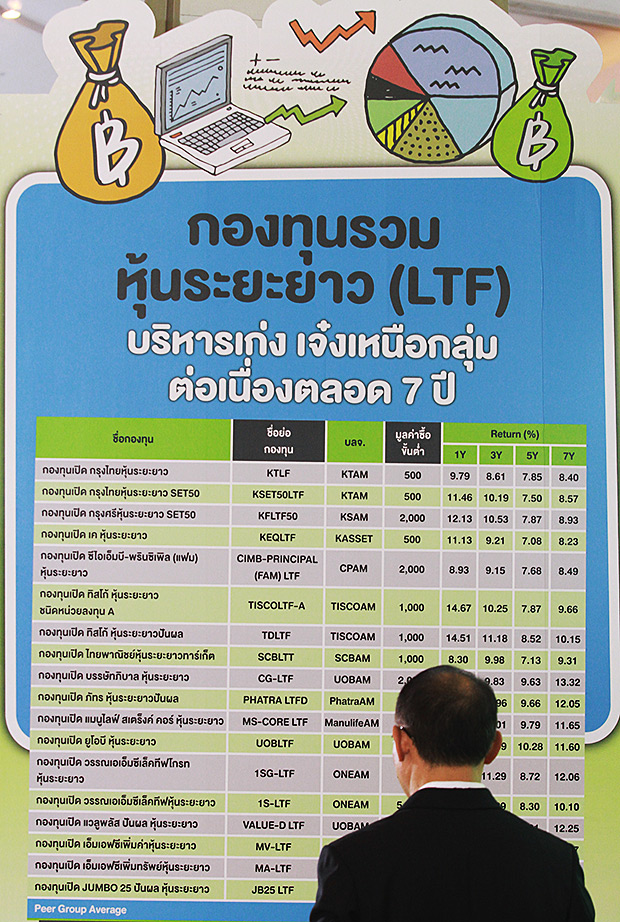 The performances of LTFs managed by securities firms are shown at the SET in the City exhibition. photos by SOMCHAI POMLARD

The tax credit of the proposed investment fund will provide a tax deduction from taxpayers' latest amount paid to the government, which benefits all types of investors in the tax bracket, he said.

Investors, however, have to hold their investment units for at least 10 years.

"The tax credit on the newly proposed investment fund will have more equality for all investors, and it will focus on long-term savings in stocks where investors could reap better returns in the long run," Mr Vasin said. "The proposed fund is well-suited for Thailand's ageing society as well."

Mr Somkid has also agreed in principle with Fetco's proposal, he said, and further consideration will be made by the Finance Ministry and the Revenue Department.

Regarding speculation that the investment incentives of the new fund could potentially attract low- and middle-income taxpayers, Mr Vasin said this would depend on the amount of savings these taxpayers wanted to make.

By investing in stocks, investors will receive a fuller investment return than from investment in life insurance products, which normally emphasise healthcare treatment, he said.

Pisit Leeahtam, president of the Provident Fund Association, said the government and the Finance Ministry should set up a Central Savings Institute to look after the country's long-term savings system and solve the burden of using the government budget to fund care for the elderly.

The government's move to discontinue the LTF tax privilege has received mixed reviews from the public, as salaried workers are poised to lose the benefit of the tax deduction on annual income despite long-term savings investment.

"The rich can have a high tax deduction [on LTF investment], while the poor don't have to pay tax," said a worker who spoke on condition of anonymity. "It is salarymen like us who have to pay [personal income] tax. No extension of the LTF tax privilege is a spear in the heart for the middle class."

Another worker said that while the proposed measure is unfavourable, moving the investment sum into other funds such as RMFs or into insurance products could be a solution.

But some people may have already maximised their investment threshold in these products, while some companies do not have provident funds for employees' savings incentives, this worker said, adding that while RMFs are a good alternative investment choice, the long holding period is a hassle for some.

RMFs work in a similar manner to LTFs. Unlike LTFs, though, RMFs tend to be a mixture of equity and fixed-income funds, leaning towards the latter.

The lock-up period is also much longer, as investments can only be redeemed when the unit holder reaches age 55 or after five years.