Sowing the seeds of self-reliance
Business

Sowing the seeds of self-reliance

Mr Wiwat comes from a farming family in Chachoengsao province. He favours organic agriculture and opposes the use of toxic chemicals.

Wiwat Salyakamthorn, aka Ajarn Yak, made his name over the decades preaching to farmers the sufficiency philosophy conceived and developed by the late King Bhumibol Adulyadej to sustain Thailand's agricultural sector.

Mr Wiwat, who comes from a farming family in Chachoengsao province, has worked at the Office of the Royal Development Projects Board for 16 years, advising farmers on how to practise self-reliance.

But only a few farmers listened to what he talked about, with some even snubbing him with a sarcastic remark that he could say whatever he wanted because he worked at the Office of the Royal Development Projects Board.

Even worse, some shot back that if sufficiency was as good as he said it was, why didn't he do it himself?

In 1996, Mr Wiwat made a bold decision to prove the worth of what he had been preaching. He quit his job and went back to his own farm to do mixed farming guided by the sufficiency philosophy. He had been experimenting with the concept since 1981.

Mr Wiwat and his family took up permanent residence at their farm in Ban Bueng district of Chon Buri, where they set up their mixed farming project on a designated one-rai plot of land.

In his observations, Mr Wiwat found that Thai farmers faced a slew of problems. Many farmers tended to suffer chronic cycles of debt. Furthermore, many damaged their soil by using chemicals to inflate their produce and changed their crops constantly to keep up with market demand.

Mr Wiwat also had problems at his own farm. Before farmers began planting sugar cane in the area, it was home to a lush and fertile forest. Eventually the soil became too dry to farm. Many farmers left the area to go work in factories instead.

With Mr Wiwat's own strenuous efforts to make his land fertile again, after one year his farm started to produce fruit. Building on his successful results, he expanded his project to 40 rai while drawing in neighbouring farmers to take part in what is now a community social enterprise.

After two decades, more than 300 perennial trees have successfully grown on the farm.

Mr Wiwat runs a community workshop at his farm called the Agro-Nature Foundation, also known as "Pigsty College", to teach people how to practise mixed farming with the sufficiency philosophy.

Because of his expertise in the late King's theories and his years-long reputation as a farm scholar who has championed a shift away from conventional methods and towards more sustainable production, Mr Wiwat, 64, was invited by Prime Minister Prayut Chan-o-cha to join the cabinet as deputy agriculture and cooperatives minister during the November 2017 reshuffle. 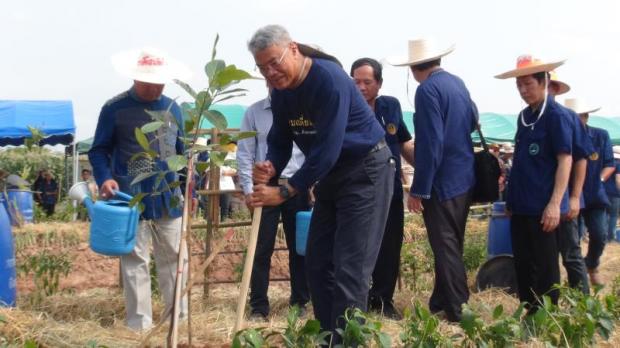 He says he accepted the invitation simply because he wanted to upgrade farmers' living standards and income.

"In the first four months in the position, I admit that I was very anxious to work under high pressure and great expectations not only from the people, but also civil servants under the ministry," Mr Wiwat says.

"I've tried to prove that I accepted the position just because of my true intention to work for the public and the whole nation. And I've spent time with officials at the Agriculture and Cooperatives Ministry to change their mindset. The civil servants at the ministry have more trust in me and are more willing to partner with me to work for the people under the sufficiency philosophy. They also hope to change the farmer folks' way of life to organic farming from the current heavy reliance on chemicals."

With his firm stand on organic farming promotion, Mr Wiwat recently threw his support behind a total ban on three hazardous substances: the herbicides paraquat and glyphosate and the pesticide chlorpyrifos.

Banned in several dozen countries as health hazards, these farm chemicals remain popular in Thailand because they make life easier for farmers who need to harvest their crops.

"I am confident that my thought is the right thing for the people and the country," Mr Wiwat says. "The declaration of my stance is good for my work and helps attract civil servants and people to assist me in my work. I'm not afraid [of any reshuffles] and I'm committed to moving forward with the natural agricultural way."

As he sees it, people are paying more attention to hazardous chemicals and food safety concerns. Many provincial governors have joined with the ministry to increase organic farming in their provinces.

"Now, my work will continue focusing on applying the sufficiency economy theory to tackle poverty problems and promote the unity of local communities using the temple as the centre and traditional ways of agricultural practices like long khaek," Mr Wiwat says, referring to the tradition of coming together to provide mutual help for activities such as rice harvests. "I also try to work the proactive way by brainstorming with the old and new generations of civil servants in the ministry to solve poverty problems in rural areas."

He also set up a team of researchers that includes both the younger generation and seasoned officials who formerly worked abroad to map out a plan for 20-50 years into the future to help the farm sector cope with global challenges.

"Although Thailand's organic agricultural policy is not yet clear enough, this is the world's mainstream trend," Mr Wiwat says. "Mono-crop production and chemical usage in the farm sector should be reduced in Thailand."

Although Thailand's 12th National Economic and Social Development Plan (2017-21) calling for organic agriculture plantation to expand by 5 million rai of farmland won't be easy, the deputy minister says it's viable.

The ministry recently began working with the governors of Ubon Ratchathani, Yasothon, Surin and Sri Sa Ket to develop organic farming in each province on 250,000 rai per province, raising the total amount of organic farmland to more than 1 million rai this year.

The ministry aims to expand organic farming to more than 30 provinces during the 12th plan.

"No one wants to get ill and eat hazardous food," Mr Wiwat says. "Food should be produced with safety and quality materials, while the production process should be environmentally friendly, with animal welfare and without exploitation of workers. These are the remarks of the late King."

LONDON: Britain will issue up to 10,500 temporary work visas to lorry drivers and poultry workers to ease chronic staff shortages, the government announced Saturday, in a U-turn on post-Brexit immigration policy.

PARIS: France will double the number of vaccine doses it will send to poorer countries to 120 million, President Emmanuel Macron pledged on Saturday, in a video broadcast during the Global Citizen concert in Paris.