People in Beijing will be able to apply for a Thai visa online from Feb 15 next year, with other Chinese cities and other countries to follow. (Post Today photo)

The Consular Affairs Department will launch its first e-visa service in February, starting with it being available in Beijing with a plan to gradually expand to other countries over three years.

The department annpounced on Monday it had joined with Kasikornbank, which will handle the payments side, in making the service available.

From Feb 15, applicants in the Chinese capital would have no need to visit the embassy to fill out a form and have it processed. They would be able to do it online at www.thaievisa.go.th..  The service would be made available in other Chinese cities later.

The e-visa service would be expanded to the United Kingdom in March and France a month later, the announcement said. All Thai embassies and consuls-general would offer the service within three years.

Department director-general Chatri Archjananun said China was chosen as the launch pad because Chinese made up the single largest group of foreign nationals seeking visas to enter the kingdom.

Chinese still top the foreign arrivals list, even though the number has dropped since the tour boat tragedy off Phuket island on July 5 that claimed the lives of  47 of their compatriots, according to Tourism and Sports Ministry figures. (continues below) 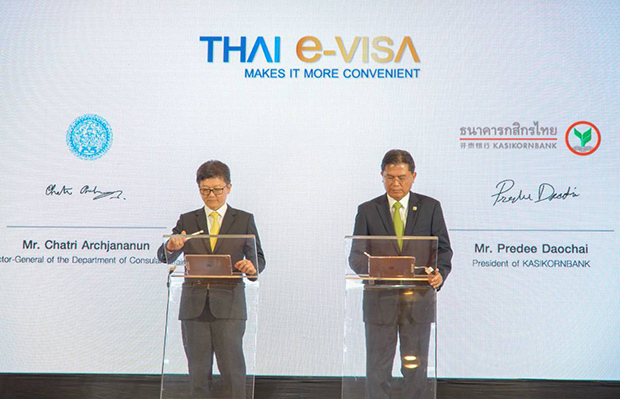 The statement said that under the plan no visa stamp woud be required in the traveller's passport as the visa holder would have been informed by e-mail on approval and information automatically transferred to the Immigration Bureau.

The visa holder would be verified by the biometric system or robotic process automation system at immigration points.

Kasikornbank president Predee Daochai said the bank's electronic transactions service could be used with credit cards, QR codes and through internet banking. Applicants in China would be able to pay for the visa through WeChat Pay, AliPay and Union Pay, he said.