Demand in 2019 expected to shrink

"Local demand dropped the last two years, but we saw growth in the condo market because of overseas buyers, particularly Chinese markets," he said.

Thai investment buyers did not build strong enough momentum. They are not hungry for condos, and have no motivation to invest in them as the resale and rental market slowed since last year, said Mr Phanom.

He said many developers are pinning their hopes on Chinese buyers, but the Chinese government increasingly restricts money transfers abroad.

Mr Phanom said the impact from the bank of Thailand's new lending curbs will not be as large as those buying a second or subsequent unit are mostly investors who will be able to pay for an additional down payment.

"The new lending rules will not be as much of a concern as market sentiment," he said. "Developers should shift to low-rise [single house, townhouse and duplex house] developments to replace condos, despite the segments relatively limited sales volumes when compared with condos."

Developers should also find a new area to invest in or diversify their businesses. Prospective sectors include property development in the Eastern Seaboard, the future Eastern Economic Corridor (EEC), industrial estates, offices and hotels.

Investment in the overseas market also has potential as it can generate a passive income. In Vietnam, the rising star segments are office and hotel.

Mr Phanom said new condo supply launched this year will total around 65,000 units but next year the number should not exceed 50,000 units for a market balance. 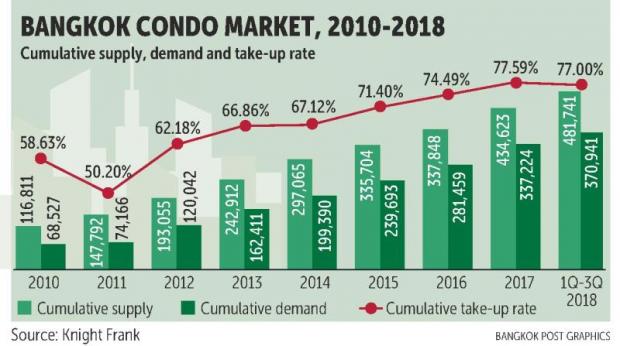 Mr Phanom said next year the EEC will have a clear picture and stimulate investment as many plans are more concrete, such as deep-sea ports, airports, high-speed trains, road expansions and improvements and industrial estate growth.

Benefits from the EEC to the residential market are unlikely to happen soon. They need time, he said.

Knight Frank's executive director Marcus Burtenshaw said the first actual investment in the industrial sector from the private sector in EEC is likely to occur over the next couple of years.

The company foresees huge growth in the warehouse business in Samut Prakan and Chachoengsao, with 250,000 square metres of new supply coming in 2019, being boosted by e-commerce.

The company will be a sales agent for four condo projects with a total of 1,880 units worth a combined 8 billion baht in 2019.