PTTEP wins both petroleum concessions in Gulf of Thailand
Business

PTTEP wins both petroleum concessions in Gulf of Thailand

Chevron to part from Erawan after 41 years

The Erawan natural gas field operated by Chevron Thailand Exploration and Production (above) will be handed over to PTTEP in 2022 under the Mineral Fuels Department's supervision. (Photo courtesy of Chevron)

US-based Chevron has operated the Erawan gas block since 1981 and has been operating in Thailand for 56 years.

PTTEP, PTT's petroleum exploration flagship, yesterday won the concession contracts for both the offshore Erawan and Bongkot blocks, starting from 2022 and 2023, respectively.

The Erawan and Bongkot blocks have a combined production of 2,110 million standard cubic feet per day (MMSCFD), contributing up to 75% of gas production from the Gulf of Thailand.

In late September, the Mineral Fuels Department, the auction host, announced that there were only two large companies, Chevron Thailand Holdings Ltd and PTTEP Energy Development Co, vying in the final round for the auctions of two gas fields.

PTTEP submitted a solo bid for the Bongkot (G2/61) concession to compete with Chevron and Mitsui's joint bid.

Chevron issued a statement Thursday to the media after the announcement.

"Chevron is deeply disappointed that it is not the preferred bidder for the Erawan and Bongkot blocks," said Pairoj Kaweeyanun, president of the local unit. 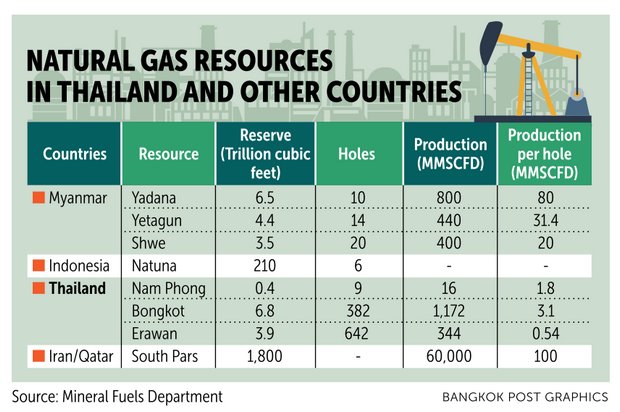 According to the statement, Chevron submitted a credible, sustainable bid built on its deep experience operating in the Gulf of Thailand.

Two bids allowed for the necessary investment to maximise recovery of the country's gas resources, it said.

"We respect the government's decision and remain committed to delivering energy safely and reliably for the country," Mr Pairoj said. "Our talented Thai personnel have made a significant contribution to the country's energy security for more than half a century and should be proud of their achievements."

Phongsthorn Thavisin, PTTEP's chief executive, said production in both gas blocks will not be interrupted during the transition period in 2022 because PTTEP has a 2.7% stake with Chevron in the Erawan block.

The Mineral Fuels Department will closely oversee the transition period in order to ease the change of operators.

Mr Phongsthorn said that although PTTEP proposed to the screening committee a lower selling price of natural gas than other bidders, the company is confident that this price level of 116 baht per million British thermal units will make a return on investment.

"PTTEP can produce the additional gas from Erawan and make a higher cost efficiency," he said, adding that PTTEP expects to trim production cost by a further 20-25%.

The PTT Exploration and Production Plc Bongkot gas extraction platform in the Gulf of Thailand. PTTEP has won the bidding for both the Bongkot and the Erawan petroleum concessions in the Gulf, which are up for renewal. (Photo viaPTTEP Plc)

Moreover, PTTEP will seek new partners to join the two gas fields after 2022-23.

Although PTTEP's triumph in winning the concessions proved to be a positive development, the company's share price dwindled considerably Thursday.

PTTEP shares closed on the Stock Exchange of Thailand at 125 baht, down nine baht or 6.7% from Wednesday's close of 134 baht, in trade worth 7.9 billion baht.

Trinity Securities' research department said the decline in PTTEP's share price was a result of investors' dismay, as they previously expected the company's selling price of natural gas for the Erawan and Bongkot gas blocks to be at least 10% below the existing selling price.

But investors have not factored in lower fixed costs and lower exploration and production costs based on the previous ecological investment database, low subcontract cost and how the company is a monopolistic entity in the country, Trinity Securities said.

Prinn Panitchpakdi, country head for Thailand at CLSA Securities, said the dip in PTTEP's share price could be due to a short-term swing in global energy prices, as global oil production is still high.

Although PTTEP's triumph may be seen as extending the company's energy monopoly in Thailand, energy prices are dictated by the state through the Energy Policy and Planning Office, Mr Prinn said.

Energy prices in Thailand are expected to be kept at a moderate level to ensure that prices are not expensive in the medium and long terms in order to attract foreign investments into the Eastern Economic Corridor projects, where a lot of energy resources will be used for industrial activities, he said.

But the selling price of natural gas generated from the two gas block concessions is poised to be lower and has no added value, as the company won the bidding on grounds of offering the lowest selling price, Ms Nalinrat said.

Still, the company's cash flow is abundant at around 100 billion baht for cash in hand and the debt-to-equity ratio remains low, allowing PTTEP's investment to continue efficiently in terms of exploration and production for the two gas block concessions, she said.

The company's triumph is a positive development and provides an upside gain for PTTEP's share price despite the share price's decline due to the swing in global crude oil prices, Ms Nalinrat said.

PTT Exploration and Production Plc (PTTEP) has won the bidding for both the Bongkot and Erawan petroleum gas concessions in the Gulf of Thailand, Energy Minister Siri Jirapongphan said on Thursday.

In the Erawan (G1/61) concession, a joint bid from PTTEP and its partner, the UAE's Mubadala Petroleum, beat the one from Chevron and partner Mitsui Oil Exploration.

Chevron operates the Erawan gas block and state-backed PTTEP operates the Bongkot concession, which  expire in 2022 and 2023, respectively.

The gas fields have a combined output of 2.1 billion cubic feet a day of gas, governmentdata shows.