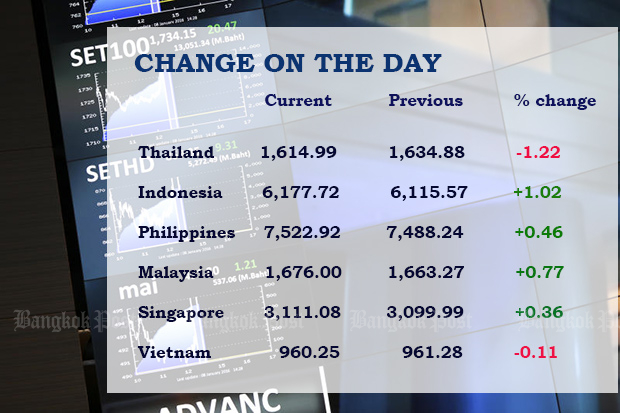 The sentiment across broader Asia seemed less pessimistic about the trade deal, with MSCI's broadest index of Asia-Pacific shares outside Japan edging up 0.8%.

Optimism about improving relations between the two superpowers grew after China made its first major US soybean purchases in more than six months on Wednesday, two US traders

said, and its first since US President Donald Trump and his Chinese counterpart Xi Jinping struck a trade war truce in early December.

Shares of PTT Plc plunged to their lowest in more than four months at 47.50 baht, while those of PTT Exploration and Production PCL fell 6.7% to 125 baht.

Oil prices were flat on Thursday under pressure from high inventories but buoyed by a drawdown in US crude stockpiles.

Shares of cigarette maker Gudang Garam Tbk PT added 1.8%, while those of Telekomunikasi Indonesia (Persero) Tbk Perusahaan Perseroan PT rose to its highest in more than a week.

However, the Southeast Asia's largest economy is expecting foreign direct investment to the country to be around $11 billion to $13 billion this year, less than the average in recent years of $20 billion per year.

Meanwhile, the Philippine central bank held its benchmark interest rate steady on Thursday, as expected, in line with the outlook for the inflation rate to cool.

The apex bank had raised rates by a total 175 basis points so far this year, at the past five consecutive meetings to tame inflation.

Singapore benchmark index climbed a near one-week high, while that of Malaysia added 0.8%.