The central bank's Monetary Policy Committee meets Wednesday amidst expectation of the first change in policy rates since April 29, 2015.

Although the Bank of Thailand is likely to begin tightening monetary policy for the first time in over seven years at today's meeting, high-ranking executives of commercial banks say they won't pass on higher rates to clients.

Banthoon Lamsam, chief executive of Kasikornbank (KBank), said there is no need for the bank to raise both deposits and lending rates even if the central bank lifts the policy rate, citing excessive liquidity and low competition in deposit mobilisation and lending.

"KBank will not be the market leader on the rate move," Mr Banthoon said.

The country's economic growth has not trickled down to low-income earners, particularly those in the farming sector, yet the rate hike would be a blow for individual borrowers, he said, adding that the economic expansion has not been broad-based, partly due to structural problems, indicating a need for solutions, particularly for the agricultural sector, from the next government.

The country's solid economic fundamentals are a key buffer against external risks and the new government should also prepare policy to cope with higher uncertainty, Mr Banthoon said.

Given that rate-setters have repeatedly discussed the rate-hike path at the latest meetings and the closeness of the 4-3 vote at last month's meeting, the market anticipates that the central bank will finally begin manoeuvres at this year's final meeting. 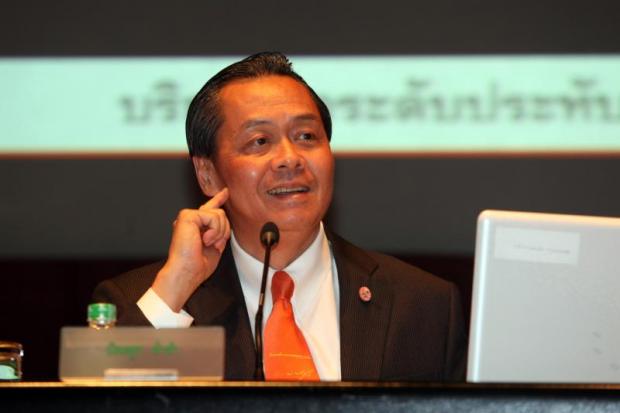 Banthoon: 'KBank will not be the market leader'

Tak Bunnag, head of the global markets group at Bank of Ayudhya (BAY), echoed Mr Banthoon's perspective, saying banks would be in no rush to follow suit if the Monetary Policy Committee (MPC) normalises the benchmark rate, since the banking system has high liquidity.

BAY predicted that the central bank will raise the policy rate by 25 basis points to 1.75% at this year's final meeting today, as the rate-setting committee will prioritise financial stability and build up policy space amid mounting uncertainty, Mr Tak said.

"We predict that the central bank will raise the policy rate today, the first rate hike in seven years, and a second hike in February 2019," he said.

The country's economic growth will have subdued inflationary pressure and positive sentiment ahead of the general election, tentatively scheduled for February next year, will also support the rate rise, he said.

Mr Tak forecast that the US Federal Reserve will raise the US policy rate in December and follow with two more rises in the first half of 2019 from the current range of 2-2.25% before halting the rate hike cycle.

Based on that assumption, the dollar is expected to weaken and the baht will run up next year, he said.

The state-owned Small and Medium Enterprise Development Bank of Thailand (SME Bank) yesterday announced that it will keep its minimum lending rate (MLR) at 6.875% until the end of February, even though the policy rate will be raised, said president Mongkol Leelatham.

After February 2019, SME Bank will review its stance again, he said.

Holding the lending rate steady is in compliance with government policy to help keep small and medium-sized enterprises' operating costs as low as possible, even though the bank will shoulder higher financial costs as a result, he said.

"Given that the bank maintains the rate at low levels and all targeted customers, including individuals and juristic entities, can access the bank's loans in timely manner through the SME D Bank platform, the bank believes that it can shield operators from feeling the pinch of the rate hike," Mr Mongkol said.

GH Bank president Chatchai Sirilai said the bank will hold its lending rate steady until the first quarter of next year and will later consider nudging up the rate by a half of the central bank's rate rise at 0.125 percentage points.

He said adding incremental financial costs will not hurt borrowers.

Ariya Tiranaprakij, executive vice- president of the Thai Bond Market Association (TBMA), said bond market participants are still sending mixed signals on expectations of a rate hike by the MPC, reflected through a decline in five- and 10-year government bond yields and a rise in the three- and six-month yields.

"The market previously priced in the rise in domestic policy interest rate, but such expectations are still mixed because [the long-term] yields have declined," Ms Ariya said. "The need to preserve financial stability underpins a rate hike, but other indicators suggest mixed views on a rise in policy interest rate."

Fund flows in Thailand's bond market are not expected to be significantly affected by a possible MPC rate hike, since foreign fund inflows have started to slow down for some time, Ms Ariya said, adding that foreign investors are investing cautiously and keeping a close watch on the Fed's interest rate normalisation.

The private sector has prepared for a rise in the domestic policy interest rate for the past 2-3 years by issuing debentures, Ms Ariya said.

By using the low-interest-rate environment to lock in low-funding costs, large corporations have bought target businesses and refinanced through corporate bond issuance, while smaller firms have issued secured bonds to raise funds, she said.

TBMA data shows that as of Sept 30, the outstanding value of corporate bonds was 3.59 trillion baht, up 9.8% year-on-year. Of the amount, short-term debentures tallied 370 billion baht and long-term debentures were valued at 3.22 trillion.

For 2019, domestic short-term bond yields will be affected by the MPC's interest rate decision, while long-term yields will be impacted by movements in US treasury yields, Ms Ariya said.

External factors, such as Brexit, the Sino-US trade disputes and problems in emerging market economies, are expected to have an impact on bond yields and fund flows in the domestic bond market next year, she said.

Normally the bond market is not affected by domestic political developments, with the exception of public policies that have an impact on large investment projects, she said.