Foreign insurers expected to receive approval to enter market soon, while banks are preparing for more activities. By Larry Jagan in Yangon

AYA Bank, one of the top three private-sector banks in Myanmar, may soon have more competition — but not much — from foreign players.

The government of Myanmar is finally putting its long-anticipated plans for economic liberalisation into overdrive. In the past few weeks it has announced numerous reforms -- including insurance liberalisation and further easing of restrictions on foreign banks, the establishment of a credit rating bureau and the formation of a "project bank" to encourage investment, especially from abroad.

The flurry of activity is partly a response to increasing criticism of the National League for Democracy-led government's performance. Since it took office in April 2016, critics say, it has done little to deliver on promises of economic liberalisation.

Some analysts say the latest measures may be too late for many investors, especially foreign businesses, who have become increasingly disillusioned with the lack of progress. This is reflected in the latest annual business confidence survey by the European Chambers of Commerce in Myanmar (EuroCham).

According to EuroCham, 81% of the firms surveyed in September were not satisfied with the country's business environment, compared with 76% in 2017 and 67% in 2016. And only 37% of European companies said they made profits this year, down from 50% in 2016.

European investors have been put off by protectionism and economic nationalism in certain sectors, like liquor and pharmaceuticals, according to the EuroCham deputy director Marc de la Fouchardiere.

But local businesses put the blame squarely on the shoulders of the government. "They just haven't done enough to promote the private sector," Moe Kyaw, the head of Myanmar Marketing Research and Development Co (MMRD), told Asia Focus recently.

But the government's chief economic adviser maintains that there is an acute divergence between perception and reality. 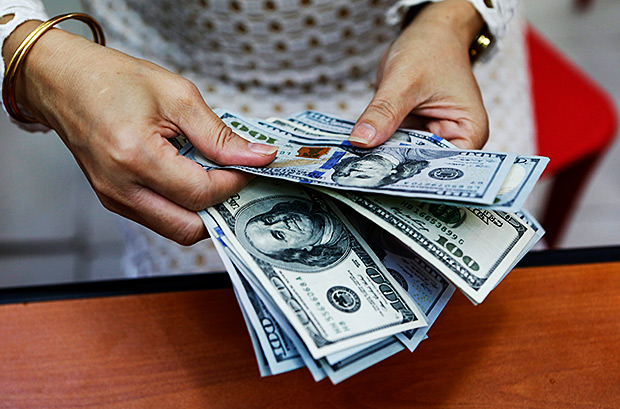 A woman counts US banknotes at an exchange counter in downtown Yangon.

"There is a very large perception gap in Myanmar between the actual performance of the economy broadly -- as noted by the International Monetary Fund, the Asian Development Bank and the World Bank -- and those local companies who fear liberalisation: those large and established companies that tend to reside in protected parts of the economy, and over rely on government contracts, concessions, special permits, and so on," Sean Turnell told Asia Focus.

For over a year there have been hints from the government and growing speculation that insurance industry liberalisation was only a matter of weeks away, and that foreign companies would be allowed to enter the market.

Now the government seems poised to finally follow through on these plans, following approval by the national economic coordination committee of foreign participation. 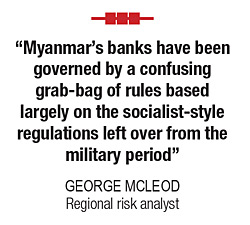 Thant Zin, director of the Financial Regulatory Department (FRD) at the Finance Ministry, told a recent seminar on the insurance and capital markets in Yangon that details of the roadmap for liberalising the industry should be made clear in the coming weeks.

Foreign insurers from 14 countries have established 31 representative offices in Myanmar, in anticipation of the government allowing full foreign investment in life insurance and joint ventures in general insurance.

"Myanmar was supposed to liberalise its insurance sector years ago, but the government repeatedly stalled," George McLeod, a regional political and economic risk analyst, told Asia Focus. "So these reforms are most welcome news."

While details of what is on offer remain vague, it is expected that a handful of foreign companies will be allowed to set up 100%-owned life insurance branches, while the rest of the industry will be open to joint ventures.

"We will soon invite expressions of interest so that foreign insurers can start operations in April or no later than May," said Thant Zin.

But insurance industry insiders say much still needs to be done. The official announcement is being drafted by domestic insurers -- organised by the Myanma Insurance Association -- and requests for proposals will be sent out shortly to prospective insurance companies.

"The local players are not happy with these reforms," said Mr McLeod, by way of explaining why the government might have been dragging its feet up to now.

Once expressions of interest are received, a shortlist of licensees would be chosen, according to Finance Ministry officials. This would be followed by the granting of provisional licences for foreign insurers and brokers. But many drawbacks remain, among them a regulatory framework that needs to be radically improved.

"Foreign competition should help the local industry provide better services and a wider range of products," said William Maung, a Yangon-based financial consultant specialising in the insurance sector. But local companies lack the human resources and expertise to meet these demands, he said. "So in theory at least, foreign insurance providers could help fill this gap with technical know-how."

The regulator maintains a tight grip the on business and domestic companies are not allowed to develop their own products, or even set their own premiums. This is set to change once liberalisation takes root.

Insurance sector liberalisation is essential for the country to develop and keep a grip on the budget deficit. "Insurance companies -- especially life insurance -- build up long-term liabilities as they grow their business," said Mr Turnell. "But these need to be matched by long-term assets -- the most relevant of these are government bonds."

In other words, this is an important step in providing the government with a form of budget financing. The government understands it must develop the bond market, and that by opening up the insurance sector to foreign companies it will deepen the bond market and help keep a lid on the budget deficit.

"If we allow foreign players in the market, we will be able to get the funds we need to develop the government bond market," Thant zin told the seminar. "Foreign insurers will need to fork out US$14 million for a licence to provide general insurance.

"Once the insurance company is given the licence, 30% of its required capital should be used to buy government bonds," he added. Working capital would represent 60% of the capital requirement, with the other 10% deposited with Myanma Economic Bank.

Insurance industry liberalisation is supposed to go hand-in-hand with reform of the banking sector. The Central Bank of Myanmar recently announced the relaxation of interest rate restrictions, expanded the allowable activities of foreign banks, and broadly extended other freedoms to operate for all banks.

"Currently, and for many decades, the country has been without the financial institutions it needs for economic growth and development," said Mr Turnell. "One of the primary reasons why these have not emerged in Myanmar has been an overly restrictive regulatory framework which is now changing.

"These changes and continued interest rate liberalisation will allow banks to provide financing to young entrepreneurs who might not otherwise have the collateral or creditworthiness of the more established firms."

There is a consensus among analysts that banking reform is essential for Myanmar's economic development. "What is clear is that the current rate of 8% paid on deposits and 13% on loans is unsustainable," said Mr McLeod. "But while reducing interest rates is the most reasonable thing to do, other measures need to be in place, especially dealing with the banks' non-performing loans (NPLs).

"Myanmar's banks have been governed by a confusing grab-bag of rules based largely on the socialist-style regulations left over from the military period," he said.

But the NLD has made headway in reforming this area -- for example by rationalising rules around interest rates for deposits and loans. "But more work needs to be done as Myanmar remains the least developed banking system in all of Asean," said Mr McLeod.

More than 50% of the banks' loans are actually bad debts and should be written off, say knowledgeable sources in the sector. But if the government insists on this course of action, there is a danger of it precipitating a disastrous bank crash. Instead, the central bank is allowing the banks time to resolve their bad debts and put their houses in order.