The folks and organisations who shaped 2018
Business

The folks and organisations who shaped 2018

We look for the themes, people, firms and events that were preeminently featured in the media.

Mr Somkid has brought forth strategies to steer the economy. photos by PATTARACHAI PREECHAPANICH

With 2019 and the long-awaited general election around the corner, the Business Section is looking back at 2018 to reminisce over outstanding news events and persons we've seen and reported.

From this year's biggest newsmakers, we have picked one outstanding individual who has shaped the country's economic development policy over the past three years; Chinese tourists, the key income contributor to the tourism sector; the Bank of Thailand, which succeeded in building up foreign reserves to a record high, enabling Thailand to withstand both internal and external challenges; and 7-Eleven convenience stores, which brought innovative services this year to traditional retail.

Here are the top newsmakers for business in 2018:

Over the three-and-a-half years since he was appointed to lead the military-installed government's economic team, replacing MR Pridiyathorn Devakula, Deputy Prime Minister Somkid Jatusripitak has been in the spotlight almost every day, detailing the policies he and his economic team have initiated.

As a former deputy prime minister, finance minister and commerce minister for Thaksin Shinawatra's government, Mr Somkid has accrued vast experience on economic and political management that have been vital in helping the government better handle the economy.

Several initiatives have been hatched by Mr Somkid, many echoing the methods he applied in 2001, when his economic policies helped steer Thaksin to electoral supremacy.

Strengthening the Village Fund, promising state help for "new economic warriors" such as small and medium-sized enterprises (SMEs) and startups, and "adding value" to locally-made products and enhancing the Thai competitive edge are all ideas that hearken back to the Thaksin era.

Mr Somkid has also championed the Southern Economic Corridor development scheme to spur economic growth in the southern provinces, which have room for investment in local raw materials such as rubber and oil palm to create value-added products.

Like the Eastern Economic Corridor, the development in the South includes a high-speed rail network, a double-track rail system, road construction and an upgrade to Ranong port.

The deputy prime minister also assigned the Board of Investment to improve incentives to attract foreign investment and promote SMEs and the local economy.

He was also key in introducing the Pracha Rat public-private collaborative scheme to enhance national development through public, private and civil society efforts.

The Pracha Rat projects aim to bring together the state, public and private sectors for the long-term sustainable development of the country. The initiative aims to strengthen the economy at the grassroots level and empower local communities.

Outside the country, Mr Somkid has also pushed forward the five-year master development plan for the Ayeyarwady-Chao Phraya-Mekong Economic Cooperation Strategy (ACMECS) between 2019-23 to strengthen sustainable economic growth and enact better economic management in the region.

The master plan comprises three objectives -- seamless development of infrastructure projects in the region; economic development, especially for the joint establishment of the ACMECS infrastructure fund; and human and environmental development.

He said the master plan should also help members better navigate global changes and their ability to manage economic growth.

In addition to a number of new economic stimulus policies, Mr Somkid makes his rounds at state agencies every month to monitor and evaluate the progress of economic policy development.

As the country encountered a slump in arrivals after the July boat accident off Phuket that killed 47 Chinese tourists, Mr Somkid posted a video clip where he spoke in Mandarin to invite Chinese to visit Thailand, on top of offering new visa privileges.

Mr Somkid can claim credit for reviving economic growth over the last three years from only 0.8% growth in 2014.

He believes Thailand's economic growth this year will exceed 4%, yielding growth at 4.1-4.2% if the fourth-quarter figure reaches 3.5%.

For the first nine months, the economy grew by 4.3% over the same period last year.

The National Economic and Social Development Board forecasts the economy will grow 4.2% this year, with figures expected to stay at 3.5-4.5% in 2019.

"I am confident economic growth in the fourth quarter will grow by 3.5% because of recoveries in tourism, domestic consumption, private investment and exports. Infrastructure development worth a combined 2 trillion baht in 2019 will play a key role in boosting the economy," said Mr Somkid. 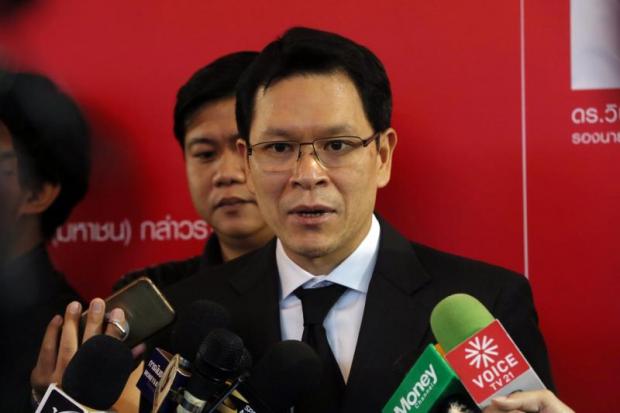 Mr Veerathai and the central bank have built buffers for the economy.

Crippled by lingering political tensions and meagre private investment, Thailand scrambled following subpar growth during 2013-17. The Bank of Thailand has built up foreign reserves to a record high to withstand both internal and external challenges.

The Thai central bank maintained the one-day repurchase rate at 1.5% until this month, near the all-time low of 1.25%.

Even though the Fed fund rate is 50-75 basis points higher than Thailand's policy rate, the Bank of Thailand is not worried about capital flight given the country's plentiful foreign reserves, high current account surplus, low foreign-denominated debt and low foreign holdings of Thai equities and bonds.

The baht has been among the best-performing currencies since last year, despite the recent emerging currency rout that rattled several countries including Turkey, India and Indonesia.

Should foreign investors see Thailand as fragile, the baht would no longer be a safe-haven currency, said central bank governor Veerathai Santiprabhob. Eliminating fragility on the domestic front is the central bank's most crucial task to prevent hefty capital outflows.

The tightened mortgage lending requirement put a spotlight on the Bank of Thailand as the regulation changes the residential and mortgage landscape.

From April 1, 2019, those who seek third and subsequent mortgages will be required to pay at least 30% of the home price up front, regardless of the price bracket.

For those who seek a second mortgage to fund the purchase of a home priced at 10 million baht or higher, a minimum 20% down payment is required.

The tighter rules are to comply with the central bank's macroprudential policy to curb risks in the property and mortgage lending industries after search-for-yield behaviour was spotted through mortgage borrowing and financial institutions' loosening credit standards.

The central bank has said the measure is pre-emptive and there is no sign of a property bubble.

In the period ahead, the central bank's next challenge will be to build up policy space amid dimming economic prospects in both local and global markets, dampened by the lingering US-China trade feud. 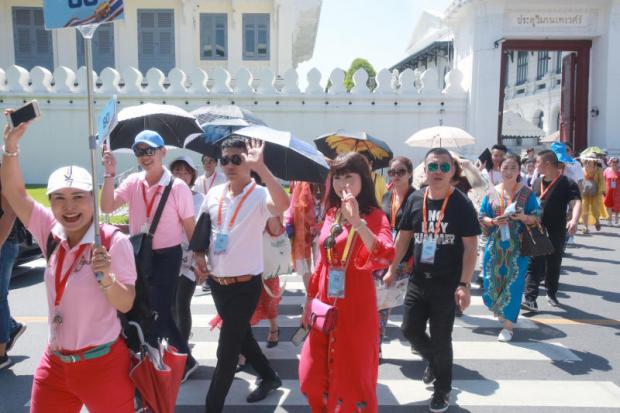 On Dec 19, He WeiXin arrived at Suvarnabhumi airport together with a number of passengers on Thai Airways International (THAI) flight TG613 from Kunming, China.

After going through the immigration process, Ms He should have taken a bus or taxi to her accommodation in the city, but she received a surprise welcome in the form of a limousine that transferred her, along with gifts from many organisations.

This fanfare-laden greeting from Thai authorities was bestowed on Ms He as she was the 10 millionth visitor from China this year.

The figure is a milestone for Thai tourism, a clear manifestation of the industry's ongoing efforts to strengthen awareness of Thailand as a top destination.

Though the tourist boat that capsized in July and killed 47 Chinese tourists dented arrivals, authorities are confident they can exceed the 10-million figure next year.

China has become the largest source of inbound tourists for many countries other than Thailand -- Japan, South Korea, Vietnam, Russia, the Maldives, Indonesia, North Korea, the UK and South Africa.

Coupled with fewer visa restrictions, more flight connections and a favourable currency exchange rate, the number of outbound trips from the mainland reached 129 million in 2017, up 5.7% from 122 million in 2016, according to the report of China Tourism Academy (CTA). For 2018, it is forecast the number could be as high as 156 million trips.

CTA notes China's outbound market has huge future potential, as less than 10% of China's population travel overseas and only 10% own a passport.

For Thailand, the 2.76 trillion baht tourism revenue in 2017 contributed to 20% of GDP. About one-third of 35 million international tourists that visited Thailand last year were from China. This year is believed to have the same demographic structure for the 38 million foreign arrivals.

The importance of the China market is reflected in the prevalence of the topic in local media in recent years. Thailand's poor handling of the boat tragedy has angered Chinese on social media and forced high-ranking officials to hasten to address systematic problems, especially safety standards in tourism destinations. Public and private agencies also rushed to the mainland to assure Chinese travellers in person of corrective actions.

Whether the efforts are successful or not, the mass fluster indicates how vital China is to Thai tourism. 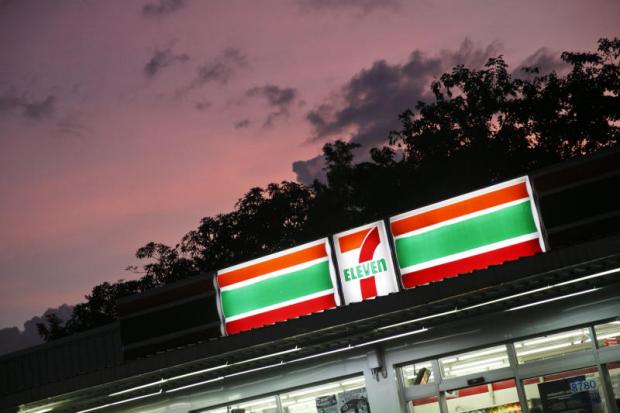 7-Eleven convenience stores are ubiquitous throughout the country.  SEKSAN ROJJANAMETAKUN

A 7-Eleven store may bring to mind snacks, microwave meals, slurpees and coffee. But even as far as three decades ago, the convenience store has been making some moves to sell books and medicine.

The store has never stopped trying to innovate. Having expanded with coffee corners, made-to-order food around the clock, 7-Eleven is on the precipice of providing banking services, parcel delivery, and tax refund services to foreign tourists.

Amid widespread technology disruption, plans are also afoot for a digital transformation, e-commerce explorations, augmented reality, and artificial intelligence to meet the changing needs of customers.

7-Eleven has had a surprisingly strong history of innovation -- it was the first store to stay open 24/7, and the first to introduce to-go coffee cups.

Although critics say the expansion is tantamount to parent firm Charoen Pokphand Group (CP) easing away all business segments, leaving no room for small-scale retailers to make a living, there is no escaping 7-Eleven's innovative influence nationwide.

Most pertinently, there is no law prohibiting 7-Eleven from expanding into other innovative services based on the competitive edge an ubiquitous domestic presence grants.

"As we are the top convenience store, we want to provide as much as possible to consumers," said a top executive at CP All who asked not to be named.

"Our customers deserve to benefit the most from our services. All the services we have provided and are developing were requested by customers."

Founded in 1988 by the CP Group, CP All was granted the licensing rights for 7-Eleven, then based in the US, that year.

Since the first store opened on Patpong Road in 1989, 7-Eleven stores have mushroomed across Thailand.

Some 6,000 companies are 7-Eleven suppliers. Of the total, 2,000 are small and medium-sized enterprises, contributing a total of 22,000 products.

In an April interview with the Bangkok Post, CP Group chief executive Suphachai Chearavanont said with a ubiquitous domestic presence, the 7-Eleven convenience store chain is looking to expand in Asia-Pacific to carry out its regional growth vision.

"[CP Group] believes our retail convenience stores should have 'regional play', not confined to Thailand," Mr Suphachai told the Bangkok Post in an exclusive interview.

"Investment should not be limited to Thailand, but investment destinations need to have market potential for Asia-Pacific."

7-Eleven, which is run by CP All Plc in Thailand, will have to discuss the expansion strategy with Seven & I Holdings, the Japanese parent company of 7-Eleven, said Mr Suphachai.

Regional expansion is likely to be managed by CP All, he said. He declined to specify whether CP All will embark on the expansion plan this year.