Helping the medicine go down
Business

Helping the medicine go down

Despite grumbling from private hospital operators, consumers and patients are cheering a plan to put price controls on healthcare services

A patient in a wheelchair waits as family go through the bill-paying procedure at Thonburi Hospital. Public outrage about high prices in private hospitals have convinced government to Do Something. (Photo by Tawatchai Kemgumnerd)

High prices for medicines and medical services at private hospitals have been draining money from consumers' pockets and are increasingly challenging the healthcare sector in Thailand.

But the latest development of putting medical-related fees on a price control list has given hope to consumers and patients, with disgruntled murmurs coming from operators of private hospitals.

The Commerce Ministry on Dec 27 said it planned to put medical-related fees, including drugs, supplies and service charges, on its price control list.

After putting this category on the price control list, a subcommittee will be set up to decide on reasonable rates for services and establish price ceilings.

"Almost all high-income countries with largely publicly funded medicines expenditures control and regulate medicines through a range of policy measures," according to the World Health Organisation (WHO). "These are also relevant for low- and middle-income countries, especially for systems working towards implementing universal health coverage."

This is not the first time the government has attempted to control prices, according to SCB Securities (SCBS).

In 2015, the government tried to help patients manage medical expenses at private hospitals via two measures. First, private hospitals could not set drug prices above label price and must disclose any markup for additional costs. Drug prices are controlled by the Commerce Ministry.

Second, private hospitals must give patients the option to buy drugs outside by giving them a prescription that could be filled elsewhere. Most hospitals already do this.

With its latest action, the government is attempting to place medical supplies and service charges on the list.

"In our view, setting prices, especially for service charges, will be difficult given the many variables contained in each treatment regimen and the differing cost structures in each hospital, both private and public, for the same diagnosis," said Raweenuch Piyakriengkai, a securities analyst at SCBS. "Thus, setting a price ceiling will be time-consuming."

The Thai healthcare sector will be pressured in the near term by concerns regarding government oversight with a plan to put medical-related charges on its price control list, Ms Raweenuch said.

"If prices are controlled, we expect the impact to be seen first on drugs and medical supplies, which we estimate contribute the most revenue at 30% of hospital revenue," she said.

Based on SCBS's assessment, it is estimated that a 5% drop in revenue from drugs and medical supplies will lower the firm's 2019 earnings forecast by 9% for Bangkok Dusit Medical Services Plc (BDMS), 8% for Bangkok Chain Hospital Plc, 8% for Chularat Hospital Plc and 4% for Bumrungrad Hospital Plc (BH).

The lower impact at BH reflects the natural buffer created by its high-end segment with a consequent higher net margin.

Until there is greater clarity, the regulatory uncertainty will pressure the healthcare service sector, Ms Raweenuch said.

The price of a medicine or a technology is generally a function of markets, and changes over time. Prices can be measured and evaluated as the price paid to the manufacturer, the price paid by the consumer or patient, or prices from suppliers, according to the WHO.

Typically, a new medicine is launched under patent and may have a high price until the patent expires and competition or generic products emerge.

Prompong Peerabol, director of Vibhavadi Hospital, said state measures to regulate medical service charges need to be carefully assessed, as they may affect the diversity of medical services provided by private hospitals.

According to Dr Prompong, the government itself has already implemented a new Universal Coverage for Emergency Patients (UCEP) plan, which demands compulsory emergency healthcare for up to 72 hours in any hospital in Thailand, applicable for both private and public hospitals.

The new plan, effective since April 1, 2017, enables all patients who require emergency medical care and assistance to be able to access it wherever they are in the country at whichever hospital is closest for a period of up to 72 hours, at no cost.

Since the new UCEP plan includes private hospitals, people in Thailand will have a much faster and easier access to key emergency medical assistance without having to travel to a public hospital, which sometimes may be farther away and place a higher risk on patients' well-being due to longer travel time.

"Private hospitals are consumers' choice, and their medical services are more widely accepted than those provided by public hospitals," Dr Prompong said. "More importantly, private hospitals at all segments are now competing hard with one another, and the patients themselves know the rates or segment which each private hospital is in."

According to Dr Prompong, if the government controls medical supplies and service prices at the same rate, private hospitals overall will be hit hard because the operating costs of each private hospital vary depending on their service level and bed quantity.

More importantly, private hospitals are all registered as juristic persons and subject to a 20% corporate income tax, while public hospitals are tax-exempt and financially sponsored by taxpayer money.

Pongpat Patanavanich, president of the Private Hospital Association, said his group will hold a meeting soon to discuss the latest government measure.

Dr Pongpat attributed the relatively high bills charged by private hospitals to the fact that these include all operating costs such as doctor fees, nurse fees and lab service charges, while such costs shouldered by state hospitals are subsidised by the government.

Whichai Phochanakij, director-general of the Internal Trade Department, said the department is scheduled to forward the proposal to include medical supplies and medical service charges on the state price control list to the Central Committee on Prices of Goods and Services, which is due to meet on Wednesday.

If the proposal is approved, it will be sent to the cabinet for passage.

The proposal is considered a short-term measure that allows the government to exercise a legal measure to take care of people after receiving complaints about private hospitals overcharging for medicines and medical services.

For the long term, the ministry needs to hold talks to form directives for medical professional services as well as doctor fees, Mr Whichai said.

At present, health insurance premiums are similar to auto insurance, whereby both products have a high loss ratio with narrow profit margin because medical-related expenses are expansive, he said.

Sombat Narawutthichai, secretary-general of the Security Analysts Association, said the government oversight would have a short-term effect, especially for private hospitals with medical-related charges above the price control standard.

But in the long run, if the standard of price control is suitable, the oversight will generate benefits to the industry in terms of increased number of patients, Mr Sombat said.

"If the standard price control makes people feel they should not fear being charged too much or at an unsuitable rate, some of them may decide to shift from state hospitals to private hospitals," he said. 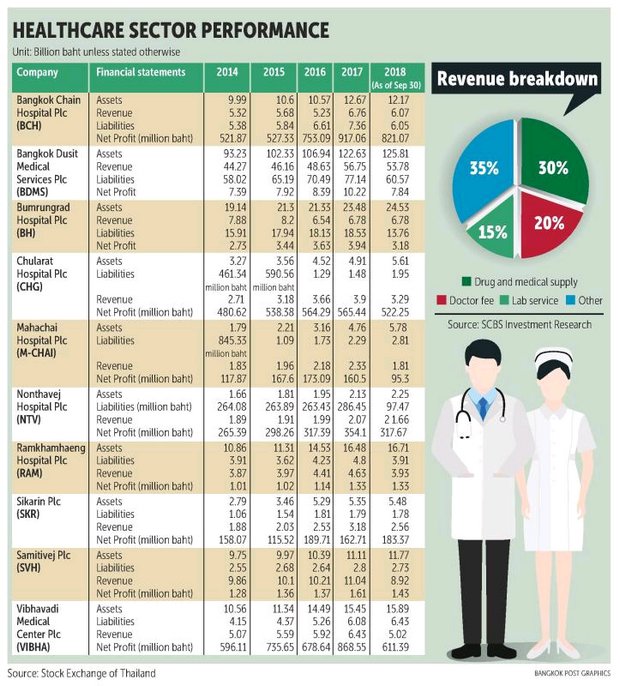