For all the hype surrounding Thailand's planned high-speed railway lines, their economic impact will be minimal without better planning to improve urban amenities and productivity in the services sector, say Japanese researchers. 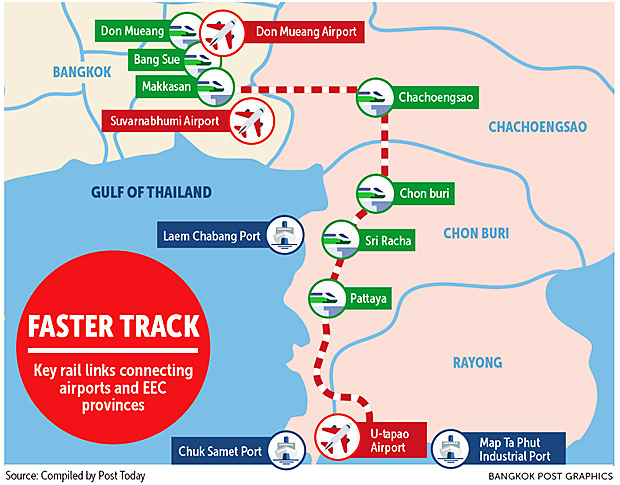 Based on current plans, the rail projects would improve the kingdom's gross domestic product (GDP) by only 0.1% by 2035, according to a research paper by the Institute of Developing Economies at the Japan External Trade Organization (IDE-Jetro).

Daisuke Hiratsuka, president of the Jetro Research Center in Bangkok, agrees with the overall aim of the rail projects but says "maybe something is missing from the EEC", referring to the Eastern Economic Corridor, the centrepiece of the government's innovation economy vision.

IDE conducts research on economic, political and social issues in developing economies to support Japanese trade and investment plans abroad. It has created a geographic simulation model that combines economic data as well as information on transport networks in 30 Asian economies. 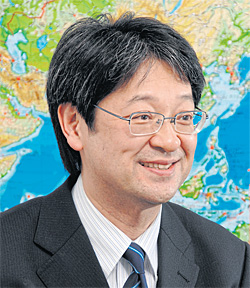 The four high-speed rail (HSR) projects connect Bangkok with Nong Khai in the Northeast, Chiang Mai in the North, the beach resort of Hua Hin to the South, and Rayong in the East. The Bangkok-Rayong route is the key as it will link three major airports and the EEC that straddles Chon Buri, Rayong and Chachoengsao provinces.

The IDE expects the line to be "commercially successful" given high demand for travel to and from Suvarnabhumi, Don Mueang and U-tapao airports. It sees the 240-kilometre route will stimulate the service sector in Bangkok, Samut Prakan, Rayong and some other provinces near the capital.

Based on a simulation of EEC activity, the Bangkok-Rayong rail route is expected to generate about five times greater impact than it would if there was no link with the three international airports.

Train frequency is a very important factor. If demand for airport connections doubles the operational frequency of trains from once an hour to once every 30 minutes, the impact would increase by more than four-fold, one scenario shows.

IDE expects the 615km Bangkok-Nong Khai route could generate greater impact than the shorter Bangkok-Rayong route, by increasing both services and the manufacturing activity in the connected HSR provinces. The benefits will also be dispersed among many other provinces, as a simulation indicates that "the longer the distance of the HSR, the greater the impact".

"Considering the transit time by high-speed rail, the longer-distance routes will encourage a switch from the existing road and air transport networks," the report added.

But despite the optimistic outlook, Dr Hiratsuka sees impact on national GDP as minimal. The IDE simulation shows that the service sector in the connected provinces will not meet its potential given a lack of urban amenities.

"I was disappointed (by the simulation results) because the impact will be very small," said Dr Hiratsuka. "But in the scenario that assumed a 10% increase of service sector productivity, it could generate a huge impact, especially on the EEC area, and contribute to higher economic growth for Thailand."

The IDE simulation showed that an increase by 9.3% in national GDP could be achieved from HSR projects led by the services sector if Bangkok and districts with train stations succeeded in increasing service sector productivity by 10%.

However, manufacturing activity might actually be reduced in the affected provinces as faster rail connections would encourage service businesses to disperse to areas within in a short distance from the core city, while manufacturing would move farther out.

"This simulation result suggests that the benefits … will depend on how much the districts with HSR stations improve the local urban amenities through urban planning," the report said. As a result, Dr Hiratsuka said improving service sector productivity in the EEC is the key concern.

"So the density of employment may be crucial, which leads us to another question and that is how to increase the density of jobs within the EEC," he said.

Dr Hiratsuka suggests that railway and urban development should be done alongside each other but that will "generate a huge cost".

One proposal by IDE is to emphasise passenger rail transport more than freight, and cot focus on "strategic" stations, such as Chon Buri, to develop mixed-use complexes with retail and residential space, a university and a hospital.

"If this kind of railway station is established in the EEC area, such as in Sri Racha and Pattaya, it will create a higher density of jobs which will increase the productivity of the service sector in the area," Dr Hiratsuka said.

"Pattaya's image should be changed from a 'bad boy' to 'good boy' so that highly talent people would want to work there," he added, suggesting that Thammasat University should open a campus at an EEC station to attract talent.

He also believes the HSR projects should be linked to the existing transport network, such as connecting Sri Racha in the east to the Airport Rail Link station in Makkasan district of Bangkok, as well as those of the Mass Rapid Transit Authority (MRTA). That would further increase passenger demand and convenience.

"Inner-city railway service that improves urban amenities, and increases the productivity of the services sector, will achieve a greater economic impact than the inter-city railway network," the IDE report stated.

"The inter-city railway service should be closely linked with the inner-city railway transport system in order to attract high quality human resources."

As for the impact on neighbouring countries, the IDE expects only a 0.1% gain in the GDP of Myanmar, Laos and Cambodia as a result of better transport to and from Thailand.

The piling work of the first phase linking Bangkok and Nakhon Ratchasima, a contract worth 179 billion baht, began on Dec 21, and service is scheduled to start in 2022.

Meanwhile, the State Railway of Thailand (SRT) aims to operate the 193km Bangkok-Rayong high-speed Thai-Japanese railway by 2023, with ticket prices starting at 20 baht with an increase of 1.80 baht per km. Trains are set to run at 250km per hour on 1.4-metre standard-gauge rails.