Thai outbound travel to Japan is set to continue growing this year despite the new departure tax, or sayonara levy, charged to all passengers leaving the country.

Effective Jan 7, both Japanese and foreign travellers leaving Japan by plane or ship are required to pay a departure tax of ¥1,000 (about 300 baht).

The levy will be added to airfares and ship fares.

"The levy is an insignificant amount and is unlikely to deter Thais from travelling to Japan," said Thanapol Cheewarattanaporn, president of the Thai Travel Agents Association (TTAA).

Tour operators will add the expense to package tours, he said.

The Japanese government plans to use the tax revenue to boost tourism infrastructure and promote travel destinations in rural Japan, as well as fund global tourism campaigns.

While competition in the market is quite intense and some package tours to Japan are available at very low prices, Mr Thanapol believes paying 300 baht more is not a problem for tourists going to Japan, a popular outbound destination among Thais. 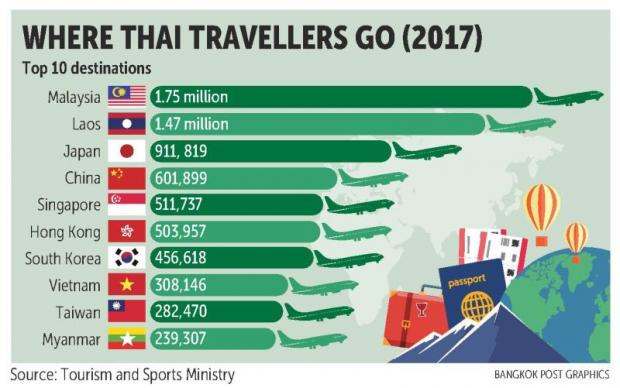 TTAA estimates the number of Thai tourists visiting Japan this year will exceed 1 million for again, after breaking 1 million for first time in 2018.

Thanks to policies to draw more international tourists, Japan now allows citizens of 68 countries/territories to travel for tourism or business without having to obtain a visa.

Since July 2013 foreign tourists including Thais staying no longer than 15 days do not need to obtain a visa.

The majority of visitors to Japan are from countries in Asia, with China, South Korea, Taiwan and Hong Kong claiming the top spots.

Kasikorn Research Center attributes the growth of Thai outbound travel in recent years to heavy competition in the tourism market and among airlines, especially after the International Civil Aviation Organisation lifted its red flag penalty on Thai aviation in 2017.

At least 10 million Thais visited other countries in 2017 and the number was estimated to reach 10.2 million last year.

Countries that share borders with Thailand -- Malaysia and Laos -- are the most visited by Thai tourists.