A new agreement has brought 39 companies from the Czech Republic to Thailand looking for investment opportunity in the Eastern Economic Corridor.

The government of the Czech Republic along with 39 companies from the Central European country met with the Thai government on Wednesday to discuss investment in trade and technological development in the Eastern Economic Corridor (EEC).

The meeting resulted in the two governments signing a memorandum of understanding yesterday to further discuss and solidify investments.

Czech officials met with Prime Minister Prayut Chan-o-Cha and the Industry Ministry at Government House to discuss trade, investment and a cooperative project between the governments. 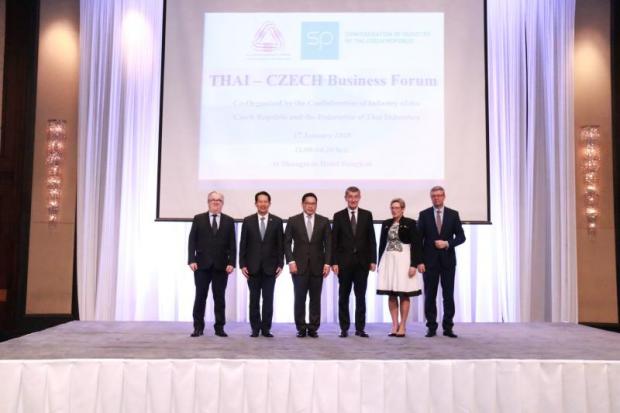 The government plans to expand the EEC to other eastern provinces in addition to Chon Buri, Rayong and Chachoengsao, the three designated for the first phase.

The government has a 20-year national strategy (2017-36) to modernise Thailand's economy. The policy is meant to avoid the dreaded "middle income gap", where wages become too high to produce low-priced products, but the economy is not developed enough to offer high-paying jobs.

Mr Uttama said the government is investing in projects in the EEC like U-tapao aviation city (290 billion baht), due to begin operations in 2023; a maintenance, repair and overhaul centre (10.6 billion) set to open in 2022; the third phase of Laem Chabang seaport (114 billion) due to open in 2023; and the third phase of Map Ta Phut seaport (55.4 billion) due for launch in 2025.

The government set up the Industry Transformation Centre (ITC) in the provinces to help small and medium-sized enterprises (SMEs), as well as 64 mini ITCs covering very small provinces. The ITC helps SMEs to improve efficiency and develop technology.

Recently the government vowed to expand its ITCs to 13 centres accessible to all 77 provinces in Thailand.

"Robotics and automation is an opportunity investment sector for Thailand, with the government's Centre of Robotic Excellence, which is operated by the ministry, serving investors," said Mr Uttama. "Business, industry, the government and Thais should adjust to prepare ourselves for changes, especially the disruption technology can bring, both destroying and creating new businesses."

Thailand has a strategy for development, but it should cooperate with all sectors and the people to develop together a decentralised platform to spread the wealth, he said, including using high technology such as 5G.