SET-listed commercial banks posted a 8.2% rise in their unaudited consolidated net profit for 2018, with most of them setting aside lower impairment charges that cancelled out the impact of waiving digital transaction fees and some recording extra gains on investments. 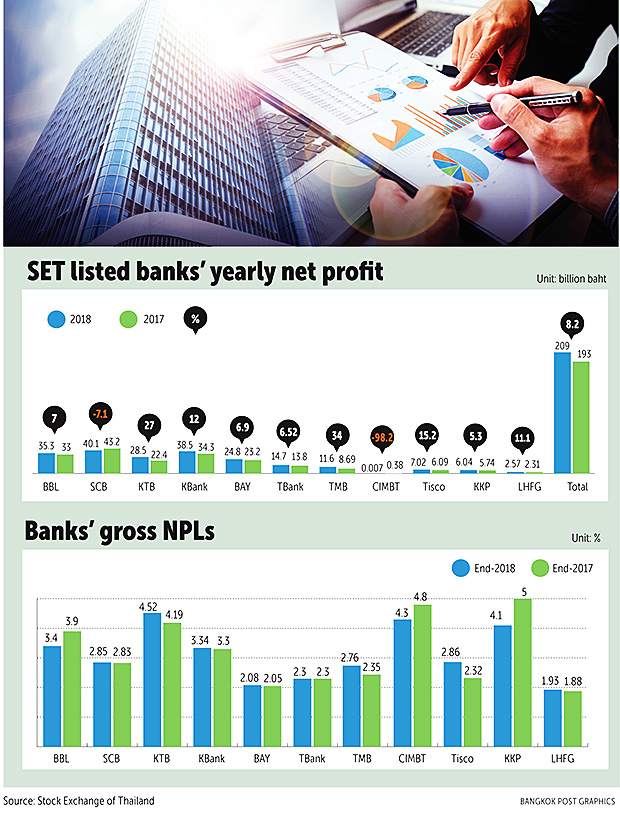 Most of the banks saw their consolidated non-performing loans (NPLs) tick up last year, though Thailand's economy was expected to register its fastest growth pace in several years.

The 11 commercial banks posted a combined net profit of 209 billion baht for 2018, compared with 193 billion baht the previous year, according to their filings with the Stock Exchange of Thailand.

TMB Bank was the best performer. Its 2018 net profit soared 34% to 11.6 billion baht, mainly due to gains on investment. The bank recorded gains amounting to 12 billion baht last year, compared with 64 million in the previous year.

TMB in the third quarter reported a one-off gain of 11.8 billion baht from the divestment of a 65% stake in TMB Asset Management (TMBAM) to Eastspring Investments, the asset management arm of Prudential Corporation Asia.

The bank set aside 16.1 billion baht in loan-loss provision last year, nearly doubling from 8.9 billion in 2017.

"The bank set a higher provision in preparation for IFRS 9 and prudent qualitative loan downgrade," said chief executive Piti Tantakasem. "As a result, the bank set up an additional 7 billion baht of provision from its normal level."

Krungthai Bank, the country's second-largest lender by assets, emerged as the second-best performer, delivering a 27% increase in yearly net profit to 28.5 billion baht, KTB said in a release, noting that a sharp decline in loan-loss provision contributed to the rise in net profit.

The bank's impairment charge for credit loss totalled 26.2 billion baht in 2018, compared with 44.8 billion put aside in the previous year.

For other large banks, Kasikornbank (KBank) delivered a 12% increase in consolidated net profit with 38.5 billion baht in 2018, up from 34.3 billion a year earlier.

KBank, the country's third-largest lender by assets, saw a 9.2% decline in its net non-interest income to 38.1 billion baht last year, bitten by the scrapping of digital transaction fees and a decrease in net premiums earned.

Bangkok Bank (BBL) recorded a net profit of 35.3 billion baht last year, up 7% from a year earlier, due to higher net interest, fee and service income, and lower loan-loss provision.

The country's largest bank by assets posted net interest income of 71.4 billion baht last year, rising 7% year-on-year. Its net fee and service income was a tad higher at 27.6 billion baht in 2018 from 27.5 billion a year earlier, as the higher gains on trading and foreign exchange transactions and investments offset the impact of waiving digital transaction fees.

The bank in 2018 set aside an impairment charge for credit loss amounting to 21.9 billion baht, down from 22.4 billion in the previous year.

The country's second-largest bank by assets reported that net fee and service income amounted to 28.5 billion baht in 2018, compared with 30.3 billion a year earlier.

SCB's total operating expenses rose to 64.4 billion baht in 2018 from 57.7 billion in the previous year.

On the other end of the scale, CIMB Thai Bank (CIMBT) was the worst performer last year, with a 98.2% tumble in its yearly net profit, largely due to higher expenses and lower gains on trading, foreign exchange and investments.

CIMBT posted a net profit of 6.9 million baht for 2018, compared with 385 million in the previous year.

Gains on trading and foreign exchange transactions declined to 1.05 billion baht in 2018 from 2.24 billion in the preceding year, while gains on investment tumbled to 19.5 million baht from 107 million.

CIMBT set aside an impairment charge for credit loss of 4.92 billion baht in 2018, down from 5.05 billion a year earlier.