Well-maintained condominium properties, such as The Sukhothai Residences, offer greater resale appeal and potential to appreciate in value.

As the prices of new condominiums in downtown Bangkok continue to rise, many buyers have begun considering resale, or second-hand, units as an alternative, according to CBRE Thailand.

The property consultancy says it has seen an increase in demand for the existing second-hand market since the fourth quarter of 2018. As prices of second-hand units are often cheaper than those at newly launched projects, buyers benefit from bigger unit sizes at more affordable cost.

There are two types of resale units: those in buildings under construction where investors want to resell before transfer of title, and those in completed ready-to-move-in units where the title has already been transferred to the original buyer.

According to a survey by CBRE Research, the total supply of completed condominiums as of the third quarter of 2018 in downtown Bangkok was 145,350 units, with prices ranging from 55,000 to 350,000 baht per square metre, depending on the grade and age of the building and how well it has been maintained.

The selling prices of newly launched luxury condominiums in downtown Bangkok now range from 300,000 to 600,000 baht per sq m -- and generally the units are smaller than in older, completed buildings.

The market for resale-before-completion units is more active right after a project launch if the building sells out and there are no units left for sale by the developer, according to Pornpimol Phuengkhuankhan, head of Advisory and Transaction (Residential Sales) with CBRE Thailand.

During construction, resale activity of uncompleted units tends to drop but picks up again as the project nears completion, she said.

In terms of payment, purchasers pay the seller the amount that has already been paid to the developer, plus the seller's profit. The original sales and purchase contract is then assigned to the new buyer, who takes all responsibility for any future payments to the developer.

For most high-end properties in the central business district (CBD), the payment terms offered by developers are 10% on signing a sales and purchase contract, and 10-20% during the construction period, with the balance paid on transfer of title at the completion of construction.

The amount that the new purchaser must still pay to the developer depends on how many monthly down payments remain before the transfer of title. It is important to note that the developer must sign the assignment agreement as well as the seller and purchaser for the contract transfer to be valid.

The key considerations for the purchaser are the reputation of the developer and its track record when it comes to delivering the quality described in the sales material.

The key considerations for purchasers of units in an older building are how good the original construction quality was, how well the building has been maintained, and the current financial status of the condominium juristic person office. The latter is the entity jointly contracted by all co-owners that manages the common areas of the property and also provides building maintenance.

Since the original Condominium Act was passed in 1979, most Thai buyers have preferred new buildings, buying units off-plan from a developer or a resale unit from an investor just before completion, rather than buying second-hand, completed properties.

"However, since the price difference between new launches and older, completed properties is now becoming so great, buyers who want a unit to live in are looking increasingly at existing developments as new ones are priced beyond most Thai buyers' budgets," said Ms Pornpimol.

"Buyers are increasingly willing to give up the prejudice against previously occupied condominium units in return for the ability to buy a larger unit for their money."

Keep in mind that there is a wide range of quality among existing developments, with some older projects being as good as new properties while others were poorly built originally and/or have been poorly maintained.

Buyers looking at existing buildings should do due diligence on the construction quality and condition of maintenance as well as gain understanding of the financial situation of the juristic person office to estimate the probability the building will be well maintained and appreciate in the future, Ms Pornpimol said. 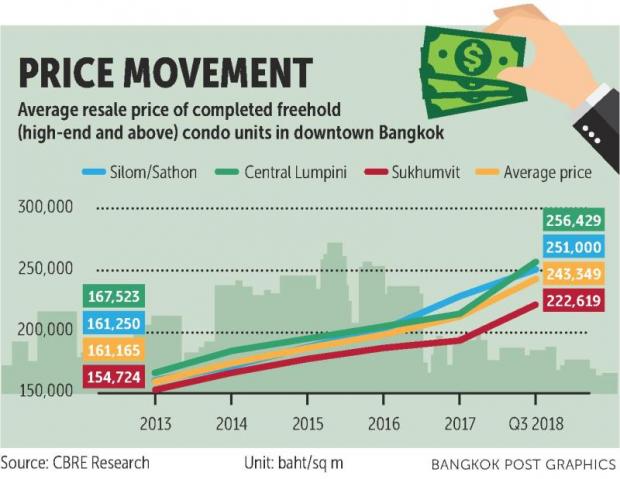