New condo supply in Pattaya being launched this year should not exceed 5,000 units as more than 12,000 units remain unsold, the highest since 2015, according to a property consultant. 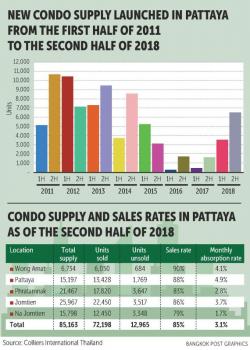 According to Colliers' market research, the number of new condos launched in Pattaya in 2018 totalled 10,239 units worth a combined 55 billion baht. The amount skyrocketed from 2,192 units in 2017.

"The amount was the highest in four years," he said. "The key driver of new supply last year was the Eastern Economic Corridor."

Mr Phattarachai said the Pattaya condo market has been slowing down since 2015. Before 2015, new supply of more than 15,000 units was launched every year. The large supply remaining unsold weakened the confidence of both buyers and developers.

"Developers should be more cautious of new supply launches as most buyers in the Pattaya condo market are investors expecting attractive yields. Very few buyers purchased for personal use," he said.

"If the economy slows down and yield is not as good as expected, these buyers may refuse to accept unit transfers. The new condo supply being added should not be excessive."

Some 82% of the new condo supply launched in 2018 was from foreign developers, such as Global Top Group, owned by an Israeli investor.

According to the Land Department, newly completed and registered projects in 2018 totalled 33 sites with a combined 8,533 units.

By location, the largest concentration of condo supply was in Jomtien area, with 33,872 units that accounted for 38.3% of total condo supply in Pattaya. This was followed by Pattaya City, with 21,967 units representing 24.9%.

Despite the high average sales rate at 80%, a large number of units remain unsold.

Some projects launched in the past few years had more than 1,500 units remaining unsold, he said.

Wong Amat saw fewer unsold condos than other locations, as plots for new development were rare.

"Projects that recorded sales as targeted last year were mostly those offering a rental yield guarantee as most condo buyers in Pattaya are investors. They use their unit only on holidays and make money from renting," said Mr Phattarachai.

Yields offered in Pattaya ranged from 5-7% for three years, but some developers offered a yield of up to 10% for 10 years that became popular among investors and foreign buyers, beating banks' deposit interest rates, he said.