The road to 4IR
Business

The road to 4IR

The Fourth Industrial Revolution will usher in an 'economy of smart' rather than scale, but Asean countries must do more to ensure a smooth transition. By Nareerat Wiriyapong

The world is waking up to the reality of the Fourth Industrial Revolution, as the concept of digitising everything is becoming a reality. Southeast Asia is no exception, as the phenomenon also known as Industry 4.0 or 4IR is affecting the way people live, work, do business and interact.

Across Asean, robotics, artificial intelligence (AI) and other technologies are revolutionising the nature of cross-border relations and economic interactions, allowing businesses and governments to improve operations and manage resources more effectively and efficiently.

The implications for workers are also profound. Job displacement will be inevitable, and Asean leaders have been urged to forge a just and balanced transition to a future world of work.

"Asean needs to better prepare itself for the future. This means adapting to and thriving in the era of the 4IR, bridging the digital divide, and preparing our workforce, infrastructure and regulatory frameworks to embrace digital transformation.

"Cyber security, for instance, poses risks to both businesses and governments; and even individuals like you and me. The scale of the changes compels us to work together, as our prospects have now become so closely interlinked."

The Asean secretariat recently completed an assessment of Asean's readiness for 4IR. It highlights disparities in levels of readiness among member states, and identifies potential steps needed to strengthen coordination.

Thai Commerce Minister Sontirat Sontijirawong said the 4IR transformation is characterised by the convergence of digital, physical and biological technologies, and innovations that bring about "the economy of smart rather than the economy of scale".

"Economic activities in almost every sector are being challenged by the arrival of new technology and innovation," he said at a regional forum hosted by the Department of Trade Negotiations in Bangkok earlier this month.

"Consequently, global workforces with manual and repetitive tasks, or low-skilled labourers, could soon be replaced by robotic and automation systems, especially in the textile, garment and shoe industries. Moreover, service-based business models, especially those that utilise digital technology, are already being transformed." 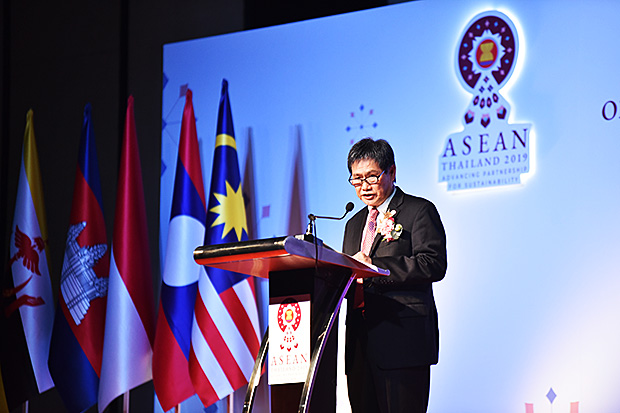 Asean secretary-general Lim Jock Hoi addresses a seminar on the Fourth Industrial Revolution, held by the Department of Trade Negotiations in Bangkok.

Labour representatives, meanwhile, say that while Asean companies lag other peers in technology adoption, the inroads made by digital platforms and AI are already being felt. Smart factories and AI-augmented services could potentially cause massive disruption in Asean countries, especially those dependent on labour-intensive manufacturing and service industries where tasks can be automated.

Consequently, the region urgently needs to develop economic growth strategies that take into account the impact of technology on the workplace, said Christopher Ng, regional secretary for Asia Pacific of the UNI Global Union (UNI–APRO).

"Trade unions are not against economic globalisation and technology modernisation. However, we want both processes to be just, fair and equitable. We need greater policy coherence in human capital formation and economic and labour market governance, where the human and social dimension is fully enshrined," he said.

Mr Ng called for more comprehensive collaboration involving government, employers and trade unions on a strategy to prepare for disruptive changes and new skill requirements. It should include adjustment measures that minimise job displacement and a programme to ensure the smooth transitioning of workers from old to new or reformatted jobs. 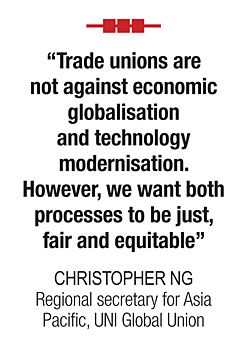 "We want the technology revolution to be harnessed for capacity creation to innovate more and better jobs and to help industry and other stakeholders make growth inclusive and sustainable," he stressed.

A balanced transition programme, he said, should comprise development of future skills, a life-long education programme, universal and comprehensive social protection and labour laws that are re-examined and updated in light of industrial transformations.

But even as concerns over AI replacing human jobs are growing, some businesses are finding that radical adoption of robotic technology is not necessarily a boon for business.

At Japan's cutting-edge Henn-na Hotel, which roughly translates as "Weird Hotel", more than half of its robotic staff were "laid off" following complaints from some guests about the practical limitations of the machines.

Among the 243 robots employed by Henn-na were a velociraptor receptionist, an automated gardener and a one-armed claw that handles left luggage. The initial success of the first Henn-na hotel in Nagasaki led the HIS travel agency to say it planned to launch up to 100 such properties over five years.

The trouble began with a bedside robo-butler capable of arranging a wake-up call or announcing the weather forecast. It mistook guests' snoring for a voice command and gave them a wake-ip call. The company subsequently said the androids that act as front-desk staff, cleaners, porters and in-room assistants would be replaced by human staff, although it is pushing ahead with plans to develop a new generation of robot employees and still plans to open new properties across Japan.

The dinosaur and humanoid robots that staffed front desks were sidelined because they were unable to respond to queries from guests about local attractions or access to airports. Humans also needed to be on standby every time a guest's passport needed to be registered.

Despite occasional false starts and setbacks, digital transformation is irreversible, and for Thailand and Asean that means a strategy is needed to help countries cope with 4IR while making the most of new opportunities. This includes promoting innovation, intensifying creativity and utilising new technologies in every process for the manufacturing and service sectors, said Mr Sontirat.

"The goal for each government is to bring out the unrealised economic potential of the country," the minister noted, adding that although the details differ among countries, there is a "shared common vision".

"That is, the economy and society of the future will have to rely on creativity, innovation and connectivity between technology and production systems to create competitiveness and increase productivity in driving sustainable economic growth."

The Thai government has introduced the Thailand 4.0 policy with the aim of transforming the economy into a value-based one driven by technology and innovation.

"The policy also places emphasis on supporting dimensions including human capital development, especially technical capabilities to cater to the transformation, having a clear vision for future development and supporting inclusive participation by all," he said.

It's a big leap from Thailand 3.0, which for decades has relied mainly on the competitive advantages of low costs and cheap labour. But that also led to low technology transfer and over-consumption of natural resources, Mr Sontirat said.

The Thailand 4.0 model focuses on production factors that are based on information and knowledge. The goal is to advance the economy using technology and innovation by building a smart society based on three dimensions: smart city, smart industry and smart people.

The smart city strategy aims at narrowing the digital gap through the development of digital infrastructure such as a nationwide broadband network. For smart industry, the focus is on the opportunities presented by targeted or "S-curve" industries as a new growth engine.

S-curve industries include those that already exist but need to become more competitive, such as automobiles and food processing, and industries that will be developed to accelerate growth, such as robotics, automation, aviation and biotechnology.

As for smart people, policies are planned to enhance human capacity to create "super workers" with proficiency in advanced technologies and robotic automation, as well as upskilling and reskilling the existing workforce.

As Thailand assumes the Asean chairmanship for 2019, Mr Sontirat said the country would place great emphasis on "advancing partnership for sustainability" to drive the region forward. To achieve this aim, the country has identified "priority economic deliverables" by recognising the importance of 4IR.

"This features prominently in our priority economic deliverables with five out of the 12 deliverables focusing on this issue alone," he pointed out.

"Asean needs to expedite deeper digital economy cooperation to drive the region forward. It is worth emphasising that if anyone misses this high-speed train of socio-economic change, they may end up being left behind for good," said Mr Sontirat.

According to the assessment by the Asean Secretariat, the region, internet transactions in the bloc's six largest markets -- Indonesia, Malaysia, the Philippines, Singapore, Thailand and Vietnam -- will reach US$50 billion in 2017.

"With this as the driving force, Asean has the potential to be among the top five digital economies in the world by 2025," Mr Sontirat said.

Naveen Menon, president for Asean of Cisco Systems, said manufacturing is a core driver of economic growth for the region, contributing about $600 billion or around 21%, to the region's GDP in 2018. The US technology group expects the figure to more than double to $1.4 trillion by 2028.

Asean has about $250 billion to $275 billion in incremental value at stake by 2028, a 35-40% increase in manufacturing value addition (MVA) from gains in productivity and unlocking additional revenue streams such as new products and quality improvements by embracing 4IR technologies. 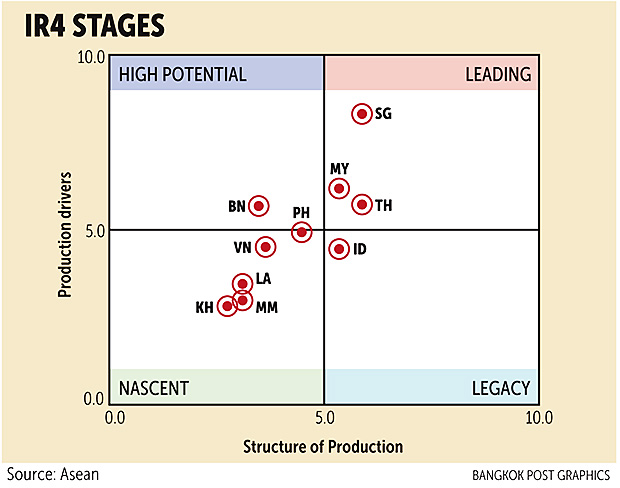 Mr Menon noted that Thailand was third in the region behind Singapore and Malaysia in 4IR readiness in the areas of technology and innovation, human capital, global trade investment, institutional framework such as government policy and support, sustainable resources and environment.

He identified five key technologies that would help the manufacturing sector transform itself in the 4IR era: Internet of Things, artificial intelligence, 3D printing, advanced robotics, and wearable augmented and virtual reality.

"The rise of 4IR technologies poses a major threat to Asean manufacturing and its growth potential," he said. "Manufacturers' low-cost competitive advantage is being eroded as competitors in advanced economies use new technologies to achieve significant improvements in cost, speed, quality and sustainability."