The development plan for defence, one of the 12 targeted S-curve industries for which the government is beefing up investment promotion, is set to go before the cabinet for vetting and approval some time in February.

Navin Damrikan, deputy secretary-general for political affairs to the prime minister, said defence industry development aims not just for usage by the military, but for commercial use as well. 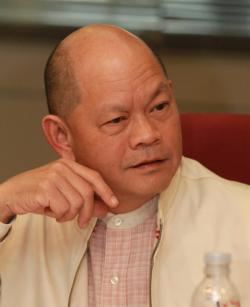 Navin: Applications for commercial use

The government also pledged to set aside a budget to support startups and R&D in biotechnology and cybersecurity, Gen Navin said.

The Eastern Economic Corridor Committee gave the green light to include defence in the targeted industries in late 2018, raising the number from 10 to 11. Education was later added as the 12th promoted sector.

According to Gen Navin, the government wants to upgrade the efficiency and technology of the army, air force and navy.

The aim is to produce more of the country's security equipment at home and reduce the annual budget for importing new weapons and technology.

Gen Navin said the initial stage of defence industry development should focus on manufacture of tyred armoured cars, jammers and firing pins for pistols and rifles, while the long-term plan calls for development of offshore patrol vessels (OPVs), drones and energy storage.

"Currently there are a number of competent Thai shipbuilders who are capable of making OPVs or other vessels for tourism purposes," he said. "What we still need is experts in the vessel engines, but we could invite foreign investment from Germany and China."

Gen Navin said the government will promote the cluster for vessel development in Sattahip district, Chon Buri and is hopeful that once the cluster is fully developed, Thailand will become one of the world leaders in OPV and commercial ship manufacturing over the next 20 years.

For drones, development will focus on control systems and anti-drone technology; connectivity between drones and artificial intelligence; unmanned aerial vehicles; and other drone-related solutions.

Energy storage, in particular, is seen as vital to future industries such as electric vehicles and for power supply in the event of natural disasters and other emergencies.

The government estimates spending 10% of the overall fiscal budget on defence industry development, with a major portion allocated to startups and educational institutes.

"Prime Minister Prayut Chan-o-cha has delivered guidelines that defence industry development should take into account the overall picture, not only production but also maintenance and repair, reinforcement and own production," Gen Navin said. "More importantly, a centre of excellence is needed to accumulate experience, knowledge and R&D so that we can finally handle our own production and provide total solutions and commercial development."

To promote defence development, Gen Navin has asked the prime minister to consider setting up a specific panel under the aegis of the National Strategic Reform and Reconciliation Committee.

Gen Navin is in talks with the Office of the Public Sector Development Commission to consider whether to upgrade the panel to have its own separate office and staff.