All parties have grace period of 1-2 years

The Office of Industrial Economics (OIE) has ordered car manufacturers and distributors to comply with the Euro 5 standard on all Thai-made and imported vehicles sold locally by 2021, while hybrid and plug-in hybrid electric vehicles (EVs) must also comply with Euro 6.

All related parties have a grace period of 1-2 years to comply.

The move is expected to reduce the smog and PM2.5 particles in the country, mainly released from car emissions. But the time frame of the National Environment Board to enforce the Euro 5 standard is 2023.

Thai-made passenger cars and pickups comply with the Euro 4 standard, but eco-cars under the second phase, totalling 27 models, follow the stricter Euro 5 regulations. 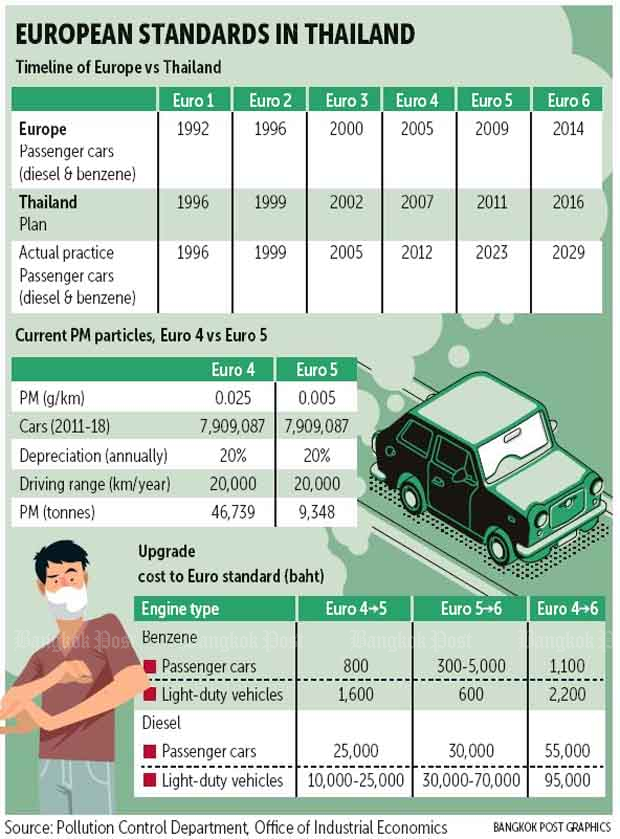 Only diesel-powered buses and trucks on the roads still meet Euro 3.

Nattapol Rangsitpol, OIE's director-general, said the office conducted a study and found that once all vehicles comply with Euro 5 within two years, Thailand can reduce PM2.5 particles by 80% or 37,391 tonnes from 2020.

He said the OIE has been calling for an upgrade to Euro 5, but many car manufacturers pushed back against the plan, saying it would cost roughly 15,000-20,000 baht more per car.

"We already estimated the extra cost and it will not be as high as the manufacturers mentioned," Mr Nattapol said. The OIE has not yet received positive responses from automakers about upgrading to the Euro 5 standard.

"But based on market sentiment, each automaker is introducing new models compliant with Euro 5, not Euro 4," Mr Nattapol said.

Germany has been through extensive court tests, and began last year to ban all diesel vehicles that were not Euro 5-compliant. (Note: Link goes off the Bangkokpost.com site)

The local diesel and petrol are compliant with Euro 4, but the Energy Ministry is also concerned about environmental effects.

On Jan 15, the ministry talked with six oil refineries in Thailand about upgrading refined oil to meet Euro 5, up from Euro 3 and 4 standards.

"I think it is time for all related agencies in the country to change their environmental policies, and the Euro 5 and 6 standards should be enforced within 1-2 years," Mr Nattapol said. "Thailand cannot fall 14-15 years behind Europe, and each stakeholder in the country should help, even if there is a high cost initially."

He said the pollution problem is dire and causes all Thais to suffer. For example, people have to pay 18,250 baht per person per year for N95 masks and 19,900 baht per household for air filters.

With 11 million people in Bangkok, the total value of N95 masks stands at over 200 billion baht per year.