The plan to merge TMB Bank with Thanachart Bank has been submitted to Finance Minister Apisak Tantivorawong and should be ready to go within this month.

The amalgamation plan of TMB Bank and Thanachart Bank (TBank) is expected to be concluded this month after being submitted to Finance Minister Apisak Tantivorawong for consideration.

The potential integration of the banks is a step closer to becoming a reality after having been contemplated by Finance Minister Apisak Tantivorawong for a while, said a source at TMB.

If Mr Apisak approves the plan, it will be forwarded for cabinet approval. The amalgamation process does not need to be completed under this government's regime, the source said.

Both banks' major shareholders began studying the benefits of a possible integration after the cabinet approved tax incentives for banking mergers and acquisitions in April 2018, with the goal of creating "champion" banks that can compete with foreign banks and regional rivals.

Mr Apisak is keen to see consolidation among banks because assets of the country's largest banks are far below those of Singapore and Malaysia, thus constraining local banks from playing an active role in the international market.

The tax deductions and exemptions to encourage mergers among Thai banks will lapse in 2022. According to the tax incentive, merged banks can deduct corporate income tax and receive a waiver from value-added tax, specific business tax and revenue stamps. 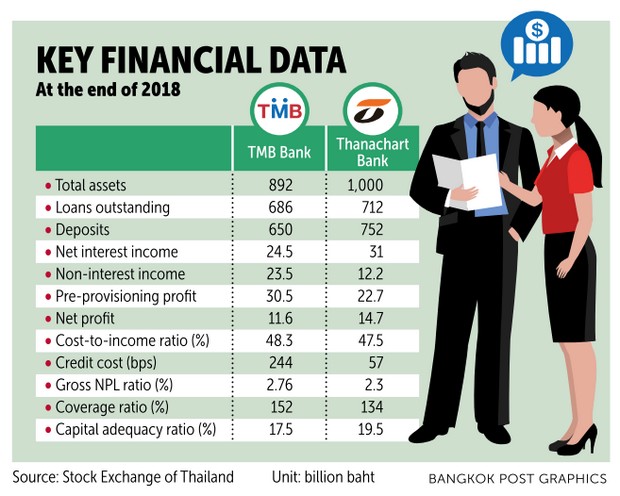 Banks with total assets valued at more than 4 trillion baht will be allowed to deduct double their expenditures, while those with assets worth 3-4 trillion baht can deduct up to 1.75 times.

TMB is the country's seventh-largest bank, with assets of 892 billion baht, while TBank is sixth with assets worth 1 trillion baht at the end of last year.

The Finance Ministry is the largest shareholder in TMB, with a 25.9% stake, while ING has a 25% stake. In TBank, Thanachart Capital Plc holds a 51% stake and Canada's Scotiabank owns the rest.

Prapas Kong-Ied, director-general of the State Enterprise Policy Office, said recently that the merger talks among shareholders of both banks were likely to conclude by the end of last month.

The source said the Finance Ministry might not inject fresh funds in the new entity to be created by amalgamation, which means the ministry's shareholding will be diluted to below 25% and it will lose its veto rights.

The final decision on the issue depends on the government's policy, the source said.

Although the Finance Ministry's holding could fall below 25%, it will remain the new entity's major shareholder, the source said.

The source said the Finance Ministry has brushed aside TBank's request for the merger tax shield to be extended to its subsidiaries when they are integrated into the consolidated entity, as the royal decree on tax deductions and exemptions offers the tax waiver only to banks.