The Bank of Thailand has insisted that the quarter-point policy rate hike last December has not resulted in offshore fund inflows, nor strengthened the baht.

"Some may assume that the Monetary Policy Committee's recent rate increase will attract fund inflows and result in a stronger baht, but data indicates net capital outflows, particularly in the bond market, since the beginning of this year," said Titanun Mallikamas, secretary of the MPC.

Mr Titanun said the baht moved in tandem with emerging markets, propelled by the US dollar's weakness and the Federal Reserve's signal of a slower pace in rate hikes. 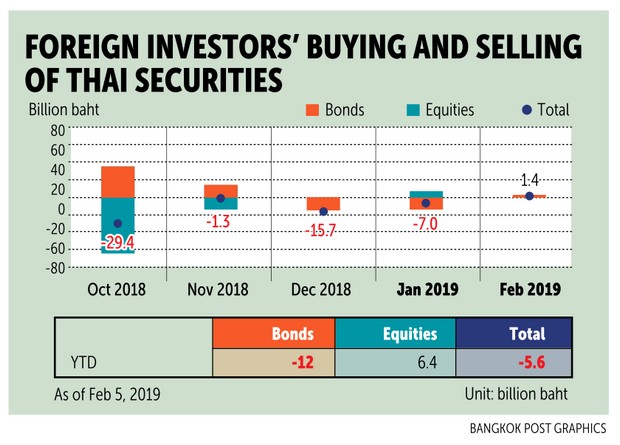 The baht strengthened in a medium range when compared with other emerging currencies, he said.

According to Reuters, the baht has been the best-performing currency in Asia this year, gaining 4.13% against the greenback, followed by the Indonesian rupiah's 3.53% and the Chinese yuan's 2.06% as of Feb 6.

The baht saw little change as of Wednesday afternoon, rising less than 0.1% to 31.279 against the dollar. 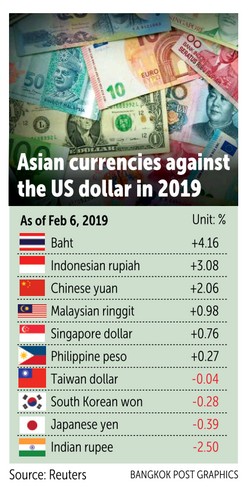 The baht's movement typically has a positive or negative effect on the economy, and a firmer baht could indirectly affect the central bank's inflation target, Mr Titanun said.

"If the baht gains rapidly, which is not in line with fundamentals and could affect the business sector, the central bank could take action," he said.

"The financial crisis of 1997 stemmed from monetary policy," he said. "The central bank must prevent this from repeating."

Mr Apisak last week urged the Bank of Thailand to rein in the strengthening baht after the currency hit a nine-month high against the greenback.

Supant Mongkolsuthree, chairman of the Federation of Thai Industries, said the Joint Standing Committee on Commerce, Industry and Banking (JSCCIB) has agreed to call for the central bank to closely watch the baht's movements.

"The firmer baht is dealing a blow to Thai exporters and hindering the economy because exports are a key engine for the country's growth," he said after Wednesday's committee meeting.

The baht should not rise past 31 to the dollar or it could blunt the country's competitive edge, Mr Supant said.

Exports fell for a second straight month in December, pushing the full-year performance for 2018 to 6.7% growth and failing to meet the 8% target set by the government.

"The central bank has to use further measures to handle the issue because all exporters, particularly in small and medium-sized enterprises engaged in food and agricultural business, are struggling," Mr Supant said.

The country's outbound shipment growth is forecast at 5-7% this year.

"The 2019 economy faces some vulnerabilities from Brexit and the US-China trade war," Mr Supant said.